If the writing is good, the graphics wouldn’t put me off.

ok, one thing ive never understood is why banner had to turn into the hulk and she hulk didn’t? Or did she turn and just never turned back …? I sort of remember that being a thing in the aforementioned cartoon

Or did she turn and just never turned back …?

There have been times in both characters comic book runs where they were either stuck in the Hulk form or unable to change into their Hulk forms. At some point, She-Hulk lost the ability to turn back into Jen and decided that she like her She-Hulk form better anyways so she didn’t bother to find a solution to her non-problem.

Not sure if that’s the current state of the character in the comic books, or if they’re taking that approach in the Disney+ series.

I am pretty sure I ran across a relatively recent “She-Hulk” comic where she can “hulk out” and back at will, but at first avoids the Hulk form because Jen only owns like 1 good suit, which she does not want to ruin, and as for She-Hulk, she is 7 feet tall or something. At some point she acquires some appropriate clothes, and the next day just goes to work Hulked out.

I wouldn’t be so sure it was due to backlash, per se. It seems very likely that they were still working on the CGI at this point, rather than this being a Sonic movie situation.

Sure, the fact that the trailer was received so badly may have pushed them to bother releasing an updated trailer, or even told them to prioritize finishing those parts. But this is too quick a turnaround for them to have had to redo things.

And it’s at least possible they always intended to silently update the CGI as they got closer.

Sure, the fact that the trailer was received so badly may have pushed them to bother releasing an updated trailer, or even told them to prioritize finishing those parts. But this is too quick a turnaround for them to have had to redo things.

At this point, I wonder if Disney simply expected there to be negative comments about the CGI and just didn’t care?

I wouldn’t be so sure it was due to backlash, per se. It seems very likely that they were still working on the CGI at this point, rather than this being a Sonic movie situation.

Yeah, there’s a huge backlog at all the VFX companies. They’re going to be working on the CGI up until release. The CGI in the recent Thor trailer was clearly unfinished as well.

In the comics I recall reading, she could always change at will. When Bruce tells her fear and anger will be required and Jen says women feel those all the time, I thought they were prepping for an explanation why.

She typically stays She-Hulk, though, to the point that a few stories have her escape various traps because most people forget she can change back at will.

That’s probably the answer. She can always change at will, and, as the comic says,

…a burning, blazing, all-consuming RAGE flows through her veins like hot, seething lava… 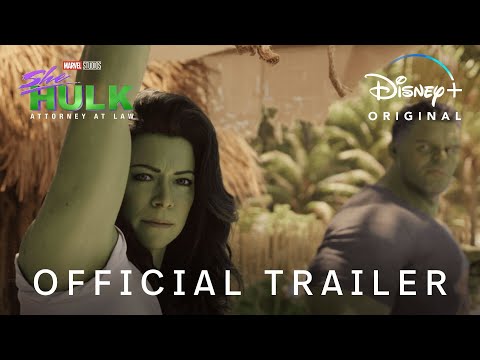 A much better second trailer. The uncanny valley effect is gone - either they’ve improved the CGI enough to eliminate it, or they’ve improved their trailer scene selection. Or both. Plus, it looks like a really fun series! The fourth-wall breaking is clearly going to be part of it, and was introduced perfectly in the trailer. Looking forward to this.

That was a much better trailer. Too bad we’re not a Disney+ household.

Huh. It looks better to me, but I still notice a significant difference between when she’s human and when she’s CG, and the Hulk looks a lot less good that he did in the other ones.

Plus her proportions look a bit weird, with kinda chicken legs.

Yeah, whatever you guys are complaining about regarding the CGI is beyond me. It looks fine to me.

And, yeah that looks pretty good. Not a big fan of Tatiana Maslany though.

It looks fine to me.

The first trailer did not.

Yeah, she looks very CGI-y (as does Bruce) but it’s fine now. In the earlier trailers she looked like Princess Fiona from Shrek.

Bumping this because the first episode aired a few hours ago.

I liked it. The tension between Jennifer and Bruce seemed natural and organic. Their fight was fun.

The CGI was a little rough in places, notably moreso on Jennifer than Bruce, but it worked. The post-credits scene about Steve Rodgers’ sex life was a nice callback to the earlier discussion.

I’m anxious to see how the incorporate Daredevil and others into it, and I want to see more of Jameela Jamil.

It’s won me over. It’s got the fourth wall-breaking of Deadpool with the silliness of Ant-Man. Good debut episode.

Loved 99% of it, the only thing I’m iffy about is the silly straight out of a comic book villain at the end. Not sure that works in the MCU. I hope they pull it off though given some of the other goofy bad guys they had in the trailer.

I think this show has promise, mostly based on the premise and the cast, but this pilot episode I did not think was good. I found it very badly written with very cliched and ham-fisted jokes and banter.

I did not find the jokes about Captain America’s sex life to be remotely funny.

And the timeline from the car crash on was very confusing to me.

Another thing I started to wonder about—Bruce Banner is from Dayton, Ohio, and he is being played by an actor from Wisconsin. Why does his accent sound like it’s from New York?

Xena can answer that.