So, what are YOU doing on Legalization Day? (Cannabis in Canada)

In about twenty-four hours, recreational cannabis will be legal in Canada for adults over 19. I have no desire to use the stuff, but I find watching this absolutely fascinating from a business and social standpoint.

If you can believe the news, cannabis companies are bringing economic booms to previously-depressed areas, and Canada may be in the forefront of a new industry.

Today in the mail there was a card from the federal government: “The Cannabis Act: Here’s What You Need to Know”. It explained the legal age to buy recreational cannabis (18, 19, or possibly older, depending on province/territory), mentions penalties for selling or giving it to youth, mentions an excise stamp on legal packages, instructs the reader not to drive high (there has been a campaign in Ontario for at least the past year about this), warns against taking it across the border, and finally reminds the reader that cannabis for medical purposes is covered under completely-different regulations.

Things I have noticed: the term ‘cannabis’ is taking over from ‘marijuana’. The original version of the regulations allowing medical use of cannabis in Canada, dating from 2001, used the term ‘marihuana’. But all the news reports, etc, these days use the term ‘cannabis’.

For some time, there have been many ‘dispensaries’ that seem to sell medical cannabis. I’m mot sure whether they were selling illegal cannabis, or just providing a place for medical users to use cannabis, or were licensed medical producers, or what. I have been in a ‘cannabis lounge’ that did not sell cannabis, but provided a friendly place to use it. (I was part of a tour group touring Kensington Market in Toronto, and the lounge was just one of the stops.)

In Ontario, the Liberal government was planning to sell cannabis through state-owned stores similar to Ontario’s state-owned liquor stores. (The LCBO, the Liquor Control Board of Ontario, is one of the largest single buyers of alcoholic drinks in the world.) So the government set up a new corporation, the Ontario Cannabis Retail Corporation, which would sell cannabis online and through a network of stores, called, unsurprisingly, “Ontario Cannabis Stores” (OCS).

Then there was an election. The Liberal government fell, and the new Conservative government announced that private retailers would be allowed to sell cannabis. But there would have to be new legislation and a new licensing system put in place, so Ontario stores will not open until early 2019. The OCRC will now serve as the wholesaler to the stores. As a result, as of October 17th, the only legal place to buy cannabis in Ontario will be the OCS website. (I am not sure what would prevent the OCRC from opening its planned brick-and-mortar stores, even if that was not going to be its focus…)

Other provinces are doing other things.

So on Wednesday, when not at work, I will be watching the news to see what is going on…

Well, it won’t change my habits in the short term. I partake, but only about 3 or 4 times a year when the situation is right. I get social paranoia unless I’m surrounded by the right people in the right circumstance. I have no “contact” to sell me stuff.

I haven’t bought marijuana products since I was … 18 maybe?

I actually can see me buying through legal channels though once the dust settles. I wouldn’t mind having some on hand to occasionally partake when the mood strikes me; something like having a bottle of fine scotch in the back of the cupboard.

It’s going to be interesting.

‘Cannabis’ is a neutral botanical term for this genus of plant. As opposed to marihuana, dagga, hashish, hemp, etc.

Through college and university, I had several roommates who were tokers, so if I really wanted the stuff, I’m sure I could have gotten it. But I hated the smell. In university, I would come back to the residence and open the door of my shared room, and clouds would waft out. I took to spending all night in the design studio, which was open 24/7. (Others did so as well, for whatever reasons; by the end of term, people had brought in microwave ovens and bar fridges, and built beds in the closets, and were basically living there… but I digress…)

I suspect that at 12:01 AM on Wednesday, tonnes of people are going to try to get to the OCS website all at the same time, and it will promptly crash. Will it be legal to take cannabis across provincial boundaries, or will there be a repeat of the beer situation?

I hope that we will not end up in the old Chinese curse, "May you live in interesting times’.

Well, I will be spending all morning and probably part of the afternoon at my ophthalmologist’s. I have an appointment at 9:50, but the average waiting time for him is 3 hours. In Quebec, there will be licensed dealers, but I don’t know if there any such yet, so I imagine people will still be going to their usual dealers. In fact, the whole thing has been set up to discourage legal sales so the illegal ones will continue as usual. The main difference is that you cannot get arrested for mere possession.

I tried it only once, about 55 years ago, and felt no effect whatever. Unlike Clinton, I did inhale since I was a cigarette smoker. I will not be in any hurry to try it.

Leaffan - I think that once they have the cannabis stores open, the workers there can maybe help you find a variety that’s less likely to cause the paranoia feeling.

I have to stay away from cannabis myself. I sometimes have an irregular pulse and cannabis exacerbates that.

I won’t be doing anything out of the ordinary. It’s not for me, though if others like it, that’s fine.

There are no retail stores locally, though that will change as paperwork and fees are submitted and licenses are issued. I believe a few acquaintances from my local watering hole are planning a trip to a legal retail outlet in Calgary on Wednesday, but it will be just another day for me.

Picking up my prescription order. It arrived today but I was at work so I’ll mosey on down to the post office tomorrow.

I heard they are vacating convictions for simple possession, under 30 grams.

Does that mean those people will still have a criminal record? Must they respond ‘yes’, if asked if they’ve been convicted? Can they go to America ?

12.01 am in Newfoundland & Labrador: Reefer madness begins to roll across Canada!

12.01 am in Newfoundland & Labrador: Reefer madness begins to roll across Canada!

I liked the BBC News article I read that had commentary from “Bill Bogart, a Toronto-based legal expert on drugs and legalisation”. 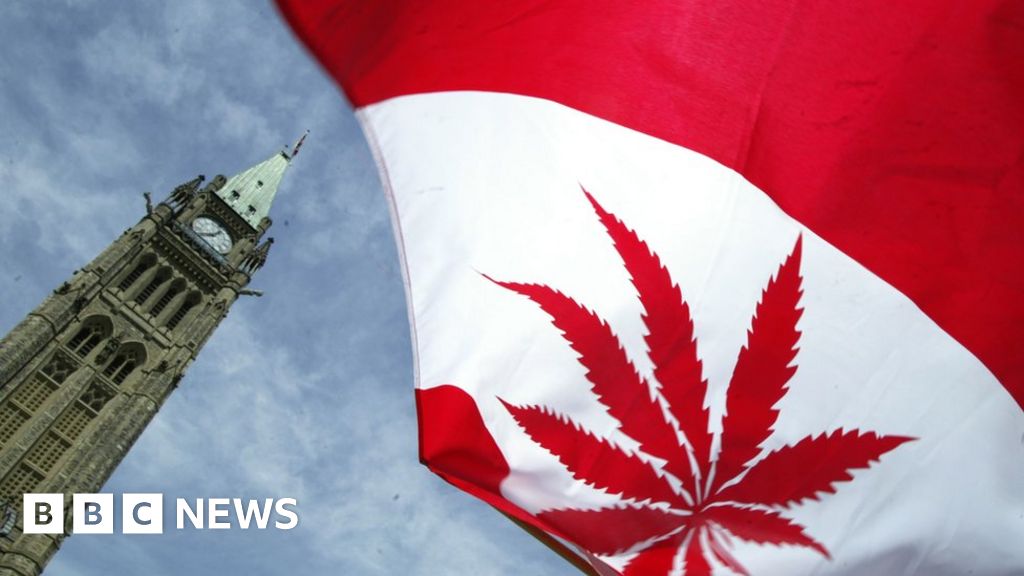 Uruguay did it first, now Canada. Who will benefit from the new law change?

Well, it won’t change my habits in the short term. I partake, but only about 3 or 4 times a year when the situation is right.

Huh. With your username, I would have guessed more.

Has the technology for a test-for-highness been created yet? I know they didn’t have anything when it went legal in a few states here in the U.S., and I was wondering if that’s advanced at all, or if they’re just using balance/coordination tests.

Leaffan is a supporter of blue leafs, not green leaves.

There are blood testing machines that are being rolled out. We’ll have to wait for the inevitable court cases to see how accurate they are.

Things I have noticed: the term ‘cannabis’ is taking over from ‘marijuana’. The original version of the regulations allowing medical use of cannabis in Canada, dating from 2001, used the term ‘marihuana’. But all the news reports, etc, these days use the term ‘cannabis’.

I don’t know about Canada, but in the US, cannabis was rebranded as “marijuana” by anti-drug activists in the 1920s and 1930s, to associate it with Mexican gangs and to make it sound more exotic and dangerous. It makes sense that proponents of legalization want to revert to “cannabis.”

The Ontario Cannabis Store website is up and running. I haven’t bought in over a decade, but prices seem reasonable for a government operation.

Here in BC, smoking weed has been forever as commonplace as any other activity, you see people smoking up everywhere, in the open. The only change will be where people buy their weed from. I’m guessing the ones with medical cannabis licenses will continue to grow their own or buy from dispenceries (lots of them around), the rest will shift from the black market to authorized dealers, i.e. the big corporations. This article puts things in perspective.

I don’t see a big rush to buy on Wednesday, since anybody who wants to smoke some has already got a nice stash, probably got it real cheap too, on liquidation sale from the black market growers. Spotting the high drivers is easy, they’re the ones who accelarate through the turns and slow down on the straights.

Well, midnight came, I poked around on the OCS website for a while, but thought some of the product descriptions were a little sparse. I heard no cheers down the street or anything, so I’m just going to sleep. Viva la revolucíon. Goodnight.

I don’t know about Canada, but in the US, cannabis was rebranded as “marijuana” by anti-drug activists in the 1920s and 1930s, to associate it with Mexican gangs and to make it sound more exotic and dangerous. It makes sense that proponents of legalization want to revert to “cannabis.”

I recall attending a lecture by a visiting American law professor, back when I was in law school. That was his point–with Mexican laborers entering the US (legally) in those days, and bringing their “loco weed” with them; then by rebranding it as the Spanish “marijuana,” instead of the English “marihuana,” or the Latin cannabis sativa, it became exotic, foreign, and dangerous to Americans who weren’t used to anything but English.

He went on to speak about the Marihuana Tax Act 1937, and marihuana tax stamps; but what I found interesting was that up until the Mexicans arrived with it, marijuana (however you spell it), was a non-issue in the US.

There are blood testing machines that are being rolled out. We’ll have to wait for the inevitable court cases to see how accurate they are.

They are just about useless. THC has a different effect profile compared to alcohol. When the concentration peaks, the THC is in the blood, where it is basically just floating around, not doing much, but then it binds to receptors, coming out of the blood, so a really stoned person will have a lower level than someone who just smoked a bowl or had some cookies. Observational assessment of a person is prettymuch all they have to go on. And I suspect some people can pass that while being stoned, because that is their norml state (but that can also be true of habitual heavy drinkers who have built up a tolerance).