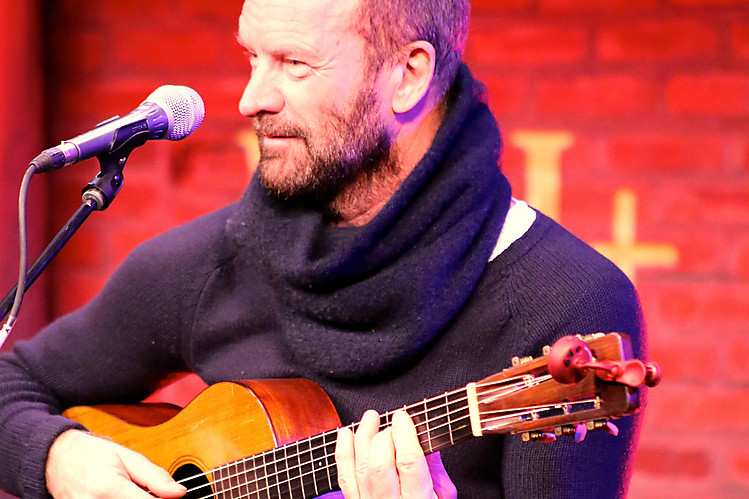 The producers of Sting‘s Broadway musical “The Last Ship” announced this morning that the show will be closing on Saturday, January 24. He's why the show failed to stay afloat.

Not the same success as, say, Tommy on Broadway, or American Idiot.

I have mentioned many times on this board that while I love much of The Police, and I respect Sting and his career, I am not a big fan of his solo work. Regardless, I appreciate the ambition of the attempt and am sorry it didn’t do well - but then again, a story marketed as being about the death of shipyards in Newcastle doesn’t sound all that marketable. It ain’t the right kind of tragedy, like Rent/La Boheme…

Broadway is about as far off of my radar as a form of entertainment can be, but I saw Sting perform a song from the play on television with some of the cast. He was lip-syncing, poorly, and the whole enterprise seemed ridiculous. I don’t think what I saw sold many tickets for the show.

Broadway is about as far off of my radar as a form of entertainment can be, but I saw Sting perform a song from the play on television with some of the cast. He was lip-syncing, poorly, and the whole enterprise seemed ridiculous. I don’t think what I saw sold many tickets for the show.

Well, the only time I saw him promote it was during the Macy’s Thanksgiving Day Parade, which requires performers to lip-synch. I didn’t hold it against him.

I remember seeing “We Will Rock You” in London a handful of years ago, and what struck me about the play, and why I enjoyed it so much, wasn’t because of the music, but because the play was hilarious.

The music was neat and all. But I’m not a classic rock fan (I can point out/recognize songs but it’s an era I wasn’t a part of) so the music was just cool and recognizable as opposed to “play music” (think Bahi Hai or something).

Maybe it died because the story sucked.

There was a PBS show where they performed what must have been a majority of the songs. I thought they were real good.

It doesn’t look like the play would be deeply tragic, or a big comedy. More of a slice of life of about a depressed and dying town, so maybe it’s not the easiest sell.

Well, the only time I saw him promote it was during the Macy’s Thanksgiving Day Parade, which requires performers to lip-synch. I didn’t hold it against him.

That’s where I saw it. Thanks for reminding me. I didn’t intend to criticize him for lip-syncing, I was just surprised at how poorly he did it. My assessment of the whole thing being ridiculous had nothing to do with lip-syncing. The song and the presentation of it seemed silly to me. That may have been due to the disjointedness of presenting a piece of a play like that, the setting, or just the fact that Broadway musicals are not a form of entertainment I like.

If I remember correctly, Sting performed a song from the show on last year’s Tony Awards. The show hadn’t even opened on Broadway yet, but he still was allowed to perform on the Tony Awards. I thought that was weird, but I guess since he’s Sting the producers probably wanted to attract more eyeballs. Was not impressed.

I appear to be the only one in the thread thus far who actually saw the show and it was very good. Not the bestest show ever, but it was enjoyable. The music was very good. When We Dance was one of the best songs I have ever seen performed on the stage in my life.

For me, a lot of the charm of the show was that 99% of the cast did not look like Broadway performers. They looked like people who would be on the subway with you, if your subway happened to run near a shipyard. That and the boot stomping dance steps may have turned some people off. Plus, the cast was huge. A lot of characters. Your investment in a character can get spread a bit thin if there are too many people with too much going on.

The story wasn’t just about a shipyard, it was about finding your true self in an unlikely place, not recapturing the past, making amends, rebuilding your life and all that.

Delurking after a few months to say that I’m seeing The Last Ship on January 24th–originally just wanted to see Sting’s last performance, but unfortunately it’s turned into the show’s last night as well. LurkerInNJ I’m so glad you enjoyed it. Anyway, I’m not surprised it’s closing, though. I mean, it’s not by Disney, it’s not a jukebox musical, it’s not a revival, and it’s not a movie-to-film adaptation. So what the heck chance did it have? Frikkin’ tourists don’t want something reflective, and I do know that it’s not a standard feel-good show. Also, it just costs too damn much to put on a Broadway production. I wish it had gone with a smaller, off-Broadway venue first.

I’ve heard the original songs, first from Sting’s recording, and in subsequent performance clips by the cast. Like so much of his music, I find it intensely haunting and touching. My favorites are August Winds, What Say You, Meg? (as close as I’ve heard him get to Richard Rodgers) and especially I Love Her But She Loves Someone Else. Yes, they’re all melancholic, but that’s more a reflection of my own taste than the show’s. There are some rollicking pieces in the score too.

Actually one of my favorite songs was cut from the show after previews (or possibly earlier?) – Practical Arrangement – but his reasons were sound; the lyrics were written for an older man than the character in question turned out to be. Bravo to him for removing the song rather than just rewriting the lyrics; that shows not only astonishing confidence (that he could just write another awesome song, which he did: What Say You Meg is the replacement), but also admirable creative integrity: obviously for him, the music perfectly fits the lyrics and vice versa, and they weren’t separable.

(In fairness I’ve heard that the book is meh, but the score’s gotten some tremendous reviews. No one I know who’s seen the show has a bad word to say about the music–quite the reverse. I think it contains some of Sting’s most thoughtful and touching lyrics as well. My hope is that he’ll rework the show and try it out in the West End, then maybe try back in NYC in a smaller venue, like the Roundabout or just off-Broadway. This project is clearly straight from his heart and means a great deal to him–he’s been knocking himself out to promote and introduce the show.)

All in all, even though it hasn’t succeeded financially, I think he certainly has musically. Most important, if creating The Last Ship got rid of his writer’s block (for those who don’t know, he hasn’t produced an album of original music since… I think it was 2004 or so?), it’s more than worth it. I think Sting’s just about the most versatile composer/musician in the rock/pop world, always willing to expand his horizons. I want him to keep producing music. Good for him for continuing to be ambitious and stretching his artistic muscles.

I only know about this by watching Sting’s appearance in *Inside the Actors Studio. *Sting himself was more interesting than anything he said about this production. At no time did I have any desire to see it.