Some years ago at the behest of my closest friend, I agreed to join pals of hers for Thanksgiving dinner at the coast, about 2 hours away. This would not ordinarily be a big drama, but it was that year.

I brought along my dachshund, since I did not know how long he would otherwise be on his own and in need of potty breaks. Also a dish to share at dinner and wine.

Just as we set out, it began to rain. Thirty minutes into the drive, I was sorely tempted to turn back – and should have. The rain intensified into a deluge. Since it was the first such rain we’d had in a long time, it brought down loose boulders on the coast road. I wished for triple-speed wipers as I dodged falling rocks. The dachshund was nervous. A terrifying and treacherous drive.

I arrived in one grateful piece, only a little late for the 2:00 p.m. dinner hour.

This was not a cook’s dinner. The turkey was Sahara-like, the mashed potatoes and stuffing originated from boxes, the rolls from a tube. My side dish was practically a duplicate of someone else’s. At least I didn’t have to stay long, because I needed to leave before it got dark – which at this time of year is around 4:30 p.m. I left at 4:00 and took a longer but slightly less exciting route home. It rained like a bastard the whole way.

Did I mention there was no gravy at dinner? Thanksgiving dinner with. No. Gravy.

When I made it safely home that night at nearly 7:00, I did three things: I built a large, roaring fire. I peevishly opened a big ol’ bottle of expensive wine, just for me. And I vowed to never again spend Thanksgiving anywhere more than ten miles away from home if driving, unless on a multiple-day planned vacation. This conveniently eliminates everyone except my closest friend, who is a fabulous cook and knows to always make gravy for Thanksgiving dinner.

That’s where I’ll be on Thursday with a nice homemade lemon cheesecake and wine in hand.

We were going to my cousin’s for Thanksgiving, but we’ve been informed that they have something like fleas (mites?) in their house. So my husband and I are celebrating alone this year. The supermarket was sold out of turkeys, so I picked up a duck. This should be interesting.

I love duck. I cooked myself a duck this afternoon for my birthday.

I remember one year I went to friends’ apartment for Thanksgiving. (Thankfully, in the same building.) I don’t knot what my friend was thinking, but she cooked the turkey for like 12 hours. It was desiccated. She shredded the meat and mixed it into the stuffing (or dressing – I forget which) and made it into a casserole. Her dad was pissed! ‘God damn it! This isn’t turkey!’ She was rather hurt. It wasn’t great, but it wasn’t inedible. I told her I liked it.

I made my first TG turkey when I was 10. My mom had flu, and I wasn’t about to not have Thanksgiving Dinner! I had to go back to her bedroom a few times, but I pulled it off quite well. I’ve made stuffing from scratch, but I usually just use Mrs. Cubbison’s or Trader Joe’s in a box. I simmer the neck and giblets to make the broth for the stuffing. I put in the neck meat, heart, and gizzards, onion, celery, and sometimes dried cranberries. So it’s ‘kind of’ homemade. I make gravy from the turkey drippings and add the liver. Potatoes are mashed, sometimes with the skins on and sometimes not, with butter and heavy cream (and salt and freshly-ground pepper). As I said up-thread, The Missus is responsible for any other sides. And yeah, crescent rolls (if we’re having them) come out of a tube. So sue me.

And yeah, crescent rolls (if we’re having them) come out of a tube. So sue me.

LOL, nah, I get it. I’m one of these annoying people who practically churn their own butter. In the years when I make Thanksgiving dinner for others, it’s a lengthy ordeal. Everything is made from scratch: The rolls, the pies, the cranberry sauce, the gravy, the dressing, the corn fritters, everything. The veg used to come from my garden, the eggs from my hens. I draw up a schedule like a battle plan, polish the silver and set the table days ahead. I enjoy doing it.

I’ve gotten less exacting as I’ve grown older. And I don’t generally care what other people do. I’m delighted with anyone who is willing to prepare a meal. But for the dinner I outlined above, even gravy out of a can or an envelope would have been welcomed to none at all!

I made cranberry sauce once. It was a huge mess, with hot cranberry gel splattering everywhere. And when it was fine, it tasted good, but everyone preferred the seedless jelly from the can.

So now i buy ocean spray. Rather to my surprise, different brands taste different, and ocean spray tastes fresher and more like cranberries than the other brands.

We’ll be making pie from scratch, though. And the gravy will be made from pan drippings, broth, and flour.

That sounds like a horrible cooking experience! I’d go back to the can, too.

Just last night i quizzed guests on whether they prefer potatoes mashed or au gratin, whether they want pecan pie, and if they like their string beans raw or cooked.

(My BIL and i are sharing cooking, so most of that is how much each of us will make.)

We were going to my cousin’s for Thanksgiving, but we’ve been informed that they have something like fleas (mites?) in their house.

So, they’ll be sitting around their dining room table eating turkey and scratching?

Our daughter and my BiLs son are just back from their first semester of college for a few days, so we are heading over to BiLs house so there will be 9 of us plus Hati the sweetest Dobie ever.
Turkey , roast potato, sweet potatoes and parsnips, various steamed veggies, gravey and stuffing.
A soup and cheese to start and Mrs Mollusc is making an applied pie.
I’ll head over early tomorrow to help with the prep.
No doubt wine and more wine , yay for kids who can drive.

soup and cheese to start and Mrs Mollusc is making an applied pie.

Is that where Mrs Mollusc shoves the pie into someone’s face?

At least I got ‘veg’ spelled correctly this time.

Thanks for joining in the thanksgiving spirit and giving me a smile. […she reminds herself to make sure to proof carefully before sending]

It was just three of us, me, my mom, and my uncle, and Mom’s recovering from surgery, so we made it easy on ourselves and got carryout turkey dinners from a local restaurant. Their portions are big enough that we got two orders, and all three ate well with enough leftovers for a couple of decent meals.

More importantly, though, my uncle made three pies. He didn’t have any apples on hand, so he made a rhubarb, a pumpkin, and a serviceberry. This was the first time any of us made a serviceberry pie, and it was delicious, but I think we needed a bit more of some sort of binder in the filling: The berries were rolling out.

And yes, a 1 to 1 ratio between people and pies is a little short, but like I said, we were keeping it low-key.

Bummed about Colibri, but thankful he was here for as long as he was.

TGD has been consumed. So much for my low-carb diet. The Missus didn’t make her sweet potato casserole (with marshmallows). She relented and just baked one. Turkey, mashed potatoes, stuffing, gravy, and green bean casserole. I had red wine, followed by gin & tonics. I had a small piece of pumpkin pie with a little whipped cream. Mrs. L.A. had a regular-sized piece.

The dishwasher is started.

My plan for steak and veggies didn’t happen.

For some reason I decided to get stuck in to cleaning my bedroom, like deep cleaning. Took a large chunk of my afternoon.

Ended up having a turkey and Swiss cheese sandwich, reheated funeral potatoes, and chive cottage cheese. A couple of non-monster sized monster cookies for dessert. 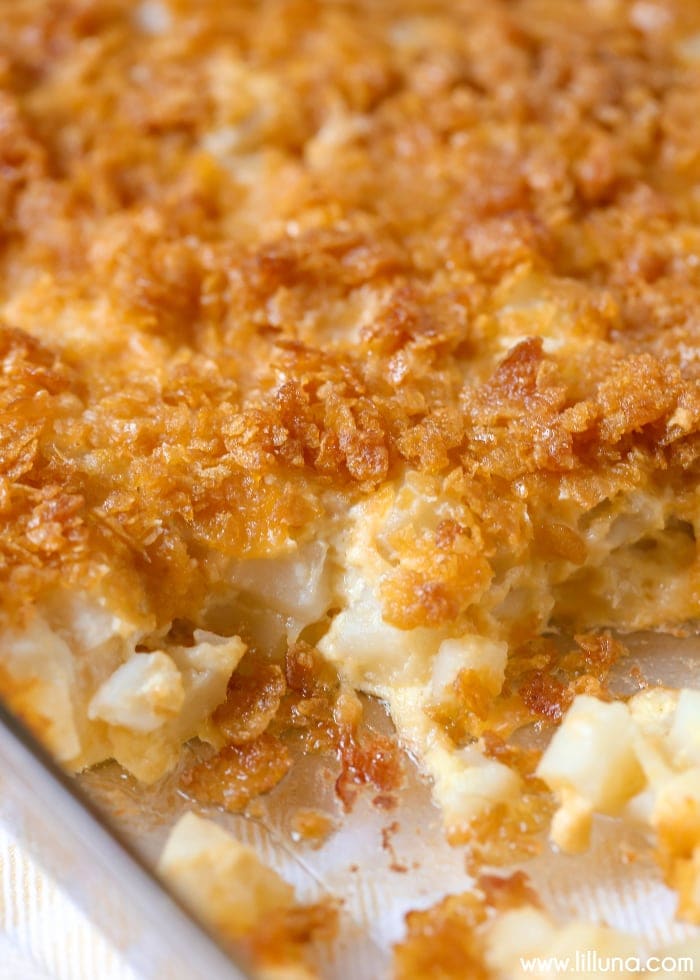 Funeral Potatoes Recipe that is a perfect Potato Casserole for dinners and holidays. It's simple, cheesy and always a hit!

Thanks. That’s a new one on me!

I’ll have to read it later to see how it differs from, say, potatoes au gratin. It’s alcohol time.