Anyone following this 6-part documentary series about the strange (and corpse-strewn) life of Robert Durst? It’s by the director who made the fictionalized account of Durst’s life, the disappearance of his wife, the murder of his old friend, the killing of his neighbour, All Good Things starring Ryan Gosling.

Durst saw the movie and actually liked it, which is why he agreed to be interviewed for the new documentary. It’s gripping stuff with the final episode airing tonight after the revelation last week of a clue which could finally put Durst behind bars.

And what do you know, he was actually arrested yesterday for the murder in Los Angeles.

This is fascinating. I just watched the last part of the documentary and it looks like his goose is finally cooked. And now I can follow the rest of the story without having to catch up.

Why in the world would he agree to be interviewed? Nothing good could have come of it and he had everything to lose. It’s because he gave the green light that the damning evidence was found.

You could understand one of his final comments as him wanting to be finally caught.

His whole body seemed to be creaking with the weight of it. Maybe his various tics will go away in prison.

I’ve been watching, and after the final part of tonight’s episode aired I couldn’t pick my jaw up off the floor.

Could this be the first time a documentary about an unsolved murder case actually solved the murder?

I was a little irritated and bored with the “will he or won’t he” that happened for about 3/4 of the interview but wow, what a payoff. Chilling and surreal…

Have you seen this show on HBO? I’m not sure that it has even been broadcast yet.

But when it is broadcast, it should be very interesting. Maybe even DYNAMITE!

“Wealthy eccentric says in HBO finale he ‘killed them all’” — "JINXED: Millionaire arrested hours before finale of film on murders… " 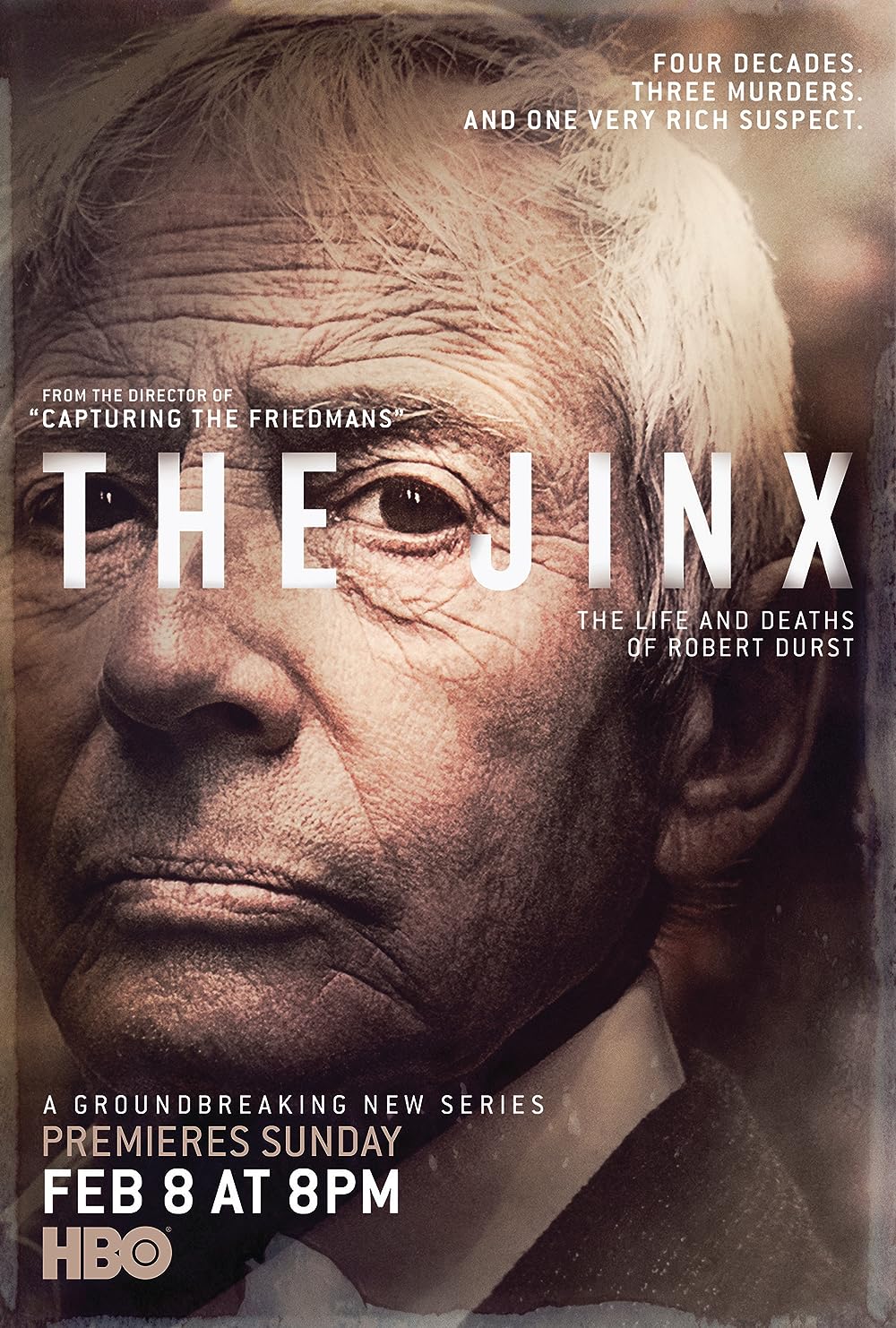 The Jinx: The Life and Deaths of Robert Durst (TV Mini Series 2015) - IMDb

P.S. His arrest for murder had nothing to do with the way he looks. Honest!

Very sorry. There was an existing thread about Robert Durst and I failed to see it.

I have reported this thread and asked the mods to delete it.

Very sorry. There was an existing thread about Robert Durst and I failed to see it.

I have reported this thread and asked the mods to delete it.

We don’t ever delete threads unless they are spam. We’ll either close or merge them, like I’ve done here.

I lost interest in the show after the first two episodes and stopped watching it. Now, I’m going to have to go back and catch up.

I watched the whole thing and saw a recently produced one hour show a few weeks before it on Vanity Fair Confidential. FWIW, VFC is on the Investigative Discovery channel (ID) and is new. It is probably the best produced of the genre and does stories that have appeared over the years in Vanity Fair magazine.

Anyway the HBO six parter was very good and obviously covered more ground than the 43 minutes or so on VFC. However there was one key thing that wasn’t brought up by HBO. According to VFC the neighbor in Galveston had connections to the Durst family back east and the theory is that he knew too much. Perhaps the evidence for that was to weak for HBO.

Another interesting dif was that VFC didn’t mention his current wife at all…the one he marrried and threw money at to gain spousal immunity. Perhaps VFC couldn’t pay her enough to gain her cooperation.

Another interesting dif was that VFC didn’t mention his current wife at all…the one he marrried and threw money at to gain spousal immunity. Perhaps VFC couldn’t pay her enough to gain her cooperation.

She was wealthy in her own right before she got involved with Durst.

She’s been a top broker in NYC for a very long time.

That being said, I am curious about the production timeline as presented in The Jinx. For example, The New York Times reports that the filmmakers didn’t notice Durst’s audio in the bathroom until two years after that interview took place. This after a (presumably) earlier instance in which Durst “rehearsed” during a break an answer he was planning to give to Jarecki, not knowing that his mic was hot.

Anyway, Gawker has an interesting analysis of the timeline as offered by the filmmakers. It will be interesting to get clarification on the timing of events that transpired during the production of the film.

An unrelated comment. I’m a little surprised the LAPD didn’t find that March, 1999 envelope, which bears the incriminating handwriting, so similar to that which appeared on the “cadaver note,” while it was investigating Susan Berman’s murder in December, 2000. Or, if they found it, they didn’t find it compelling. I’ve read that a handwriting analysis was performed in 2003; I suppose the “cadaver note” was compared with then-known samples of Durst’s handwriting (not the March, 1999 envelope, which investigators at the time seem to have been unaware of), but that the results were inconclusive. Did detectives miss this box of papers that ended up in Susan Berman’s stepson’s possession? Or did they see the box’s contents during their investigation but skipped over the March, 1999 letter? I think establishing the provenance of the letter (who discovered it and when? who had it and when?) will be important to Durst’s case.

Finally, that audio from the bathroom was chilling, as was Durst’s earlier uncontainable, visceral reaction to Jarecki’s questioning about the handwriting (the strange burping, which Durst even mentioned to himself), but I suspect an exceptionally adroit and well-paid defense team can spin the phrases Durst muttered off-camera as somewhat less damning than they appear on first hearing.

Finally, that audio from the bathroom was chilling, as was Durst’s earlier uncontainable, visceral reaction to Jarecki’s questioning about the handwriting (the strange burping, which Durst even mentioned to himself), but I suspect an exceptionally adroit and well-paid defense team can spin the phrases Durst muttered off-camera as somewhat less damning than they appear on first hearing.

Or keep it out of court altogether. IANAL, of course, but there must be some way to keep the prosecution from playing this for a jury.

He’s not convicted yet. There was no real hint of it in this documentary, but you have to wonder how much money has been passed under how many tables to keep Durst out of prison.

This isn’t over until a jury comes in with a verdict.

I think that he’s done for but I can see how a defense would go. Somehow exclude the documentary footage. Chain of custody issues on the envelope. If they allow the bathroom audio say that he meant, “now people will think that I killed them all.”

The LAPD really fucked the dog on this one. It’s unbelievable that they didn’t go through that box of possessions and that they didn’t compare the Cadaver Note writing to other examples like the rental agreement that the documentations found.

Dumbfuck Durst could have lived free and easy if he never agreed to be interviewed. What possible good could have come from him doing that? I had never heard of the guy prior to the HBO film.

Jarecki and Smerling address some of the timeline questions posed earlier,

I had never heard of the guy prior to the HBO film.

There was a L & O episode based on one of his murders.

Let’s just say I hope the prosecutors seek to sequester the jury.

Just came across the following news report on the net and I was staggered. Wow, I thought, this guy Durst just doesn’t know when to stop.

NEW ORLEANS—Following his arrest Saturday after he unknowingly implicated himself in the 2000 slaying of his friend Susan Berman during the taping of the television documentary The Jinx, real estate heir Robert Durst reportedly muttered his intention to murder his interviewers from the HBO special while unaware he was still wearing the live microphone they had placed on him three years ago. “The second I’m out, I’ll shoot those moviemaking pricks that put me in here, and then I’ll saw apart their bodies and hide them,” Durst said while in his holding cell, apparently still oblivious to the lavalier mic that has been clipped to his shirt since the April 2012 interview and which has recorded numerous incriminating statements he has made since, including the phrases “Of course, they’ll never find where I buried Kathie” and “Maybe I’ll murder my brother sometime soon, too.” “I’m going to kill the producers. I’m going to kill the crew. All of them are dead just as soon as this jury finds me innocent, of course.” At press time, representatives for the New York scion said he was refusing press interviews for privacy reasons.

Then I saw the source. Damn, the Onion got me again! :smack: