Anyone else give this a try? I watched the first episode and it was a bland cheesy soap opera, like most things on the CW. Also, there are magic swords, all of which must be caught. First impression is that it is crap.

Second episode down, and this show is not very good.

I mean, it’s fine. But it’s a bit simplistic and unlikely. It feels very old-school. Shows like this thrived in the 70s and 80s, but standards are higher now, and this just doesn’t cut it.

Just three years of training, and she is able to fend off ninjas and hold her own for a while with the baddy? Her teachers and all the other followers that trained for two to five times longer should have been able to mop up that invasion in their sleep if the training gives a novice that much skill and ability. The original story involved over twenty years of training, and Caine couldn’t pull off some of what she was doing as a mere novice.

I do hope they somehow include David Carradine. The current Flash did include actors from the 90s Flash so there is precedent.

Him being dead for 12 years might be a challenge for them.

Him being dead for 12 years might be a challenge for them.

A death most legendary.

Oops, did not remember he was dead. Maybe Chris Potter who played his (great grand) son on KF The Legend Continues

Didn’t make it through the second episode, which is unusual for me as I generally give a show three episodes to prove it sucks. Besides the aforementioned “three years of training and she’s a Master” BS, I had trouble with the fact that in the first episode her and her friends were able to take down the local big criminal in a week, which the local cops hadn’t been able to do.

Can’t wait for the first team up with Flash and Supergirl.

Watched part of the 3rd episode, but I’m out.

Me too. I’m clearly not the target audience for this.

I’ve kind of enjoyed watching for the shots of San Francisco that don’t actually exist, but I don’t think that will last long. A shame, because I feel like they could have done a lot more with this setting.

Curious, I just read a review of the season finale. I…don’t regret bailing. 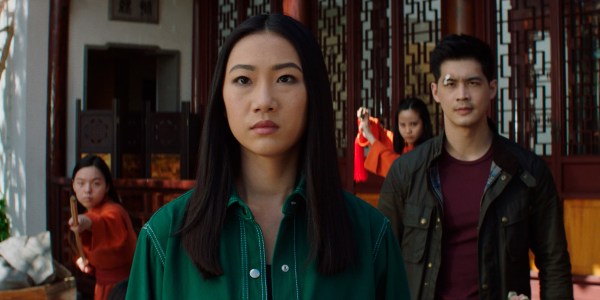 The first five episodes were very bland and formulaic. However, the second half of season one has been much better. It’s like they had different writers than the early episodes. Haven’t seen the season finale yet, but episodes 6-9 were very good.

I like the lead actress and her character. She is super attractive and has a likeable personality. The villain is also intriguing as well.

The fake scenes of San Francisco in the early episodes were cringeworthy and awful. The worst were when they showed the “Cable Cars” that actually had wheels with tires!!

Did they look like this? Those are very much a thing here in San Francisco, but mostly for tourists and event transportation. They obviously aren’t actual cable cars, but you do see them around town occasionally. A friend of mine used to work for one of the rental places.

Yes, that’s what they looked like. I actually took a city tour in one of those when I was in S.F. But on the show the cable car on wheels just moved along by their Chinese restaurant, like it was a regular cable car. It looked so fake. Also, Cable Cars don’t go down the main street in Chinatown anyway.