In The Blues Brothers’ Rubber Biscuit, Dan Aykroyd says ‘The other day I had a cool water sandwich and a Sunday-go-to-meetin’ bun.’

I know a ‘cool water sandwich’ is a slice of watermelon. What is a ‘Sunday-go-to-meetin’ bun’?

A guitar forum gives the definition as “Sunday go-to-meeting bun is a leftover roll that one quickly pockets on the way to church. Basically, it means day old or stale hard bread.”

No attribution, no cite but sounds reasonable which means it’s undoubtedly wrong.

It seems to me more like a reference to poverty food, e.g. nothing at all, or nearly so.

‘Cool water sandwich’ is water to drink instead of food to eat; like a salt and pepper sandwich, or what Paddy shot at and missed, or wish steak.

A go-to-meeting bun is a communion wafer; perhaps the only free food to be had on Sunday.

The rest of the song is about wish sandwiches and ricochet biscuits and rubber biscuits (whaddya’ want for nothing?) too.

‘Cool water sandwich’ is water to drink instead of food to eat;

According to what I’ve found online, people are saying The Blues Brothers say it’s Southern slang for watermelon.

The Blues Brothers may well have said that, but that don’t make it so. It may even be true, but I’d expect that there would be some independent source to confirm it. http://insidioustomatoes.com/a-cool-water-sandwich/, for instance, refers to it as a glass of water and two hard rolls, served during the Depression. So that’s one source for watermelon (the Blues Brothers), one against.

The song was written by the Chips, and insofar as one can make sense of a song that is mostly scatlike nonsense with spoken word intervals, it seems to be talking about having little/nothing to eat.

First section: a wish sandwich, where you have bread but can only wish for meat.
Second section: ricochet biscuit, where if it doesn’t bounce off the wall into your mouth you go hungry (presumably the singer went hungry).
Third section: cool water sandwich and a sunday go-to-meeting bun. If this means a slice of watermelon and a lady to go to church with (or one of the other theories on various music boards) it breaks what little through-line there is to the song. If it’s a glass of water instead of a meal (or a glass of water and two hard rolls) and a communion wafer or free doughnut from church, it ties together with the wish sandwich from the first section. The communion wafer/doughnut in the church basement that you get for free on Sunday does as little to slake your hunger as the free rubber biscuit in the next section.
Fourth section: what do you want for nothing? Rubber biscuit? i.e. you’ve got no money, so you can’t get anything that’s filling. Chew that rubber biscuit all you want, but you’re still hungry.

Since this just popped up on the iPod…

brossa opined over five years ago:

If this means a slice of watermelon… it breaks what little through-line there is to the song.

I don’t think it does. According to this site, ‘Historically, watermelon is the food of the underclass, the rural, the poor, the people society doesn’t value.’ I don’t know what I didn’t say it years ago, but I’ve always thought of watermelons as ‘poor people’s food’.

I don’t know about a Sunday-go-to-meetin’ bun being a communion wafer. While the writers certainly could have been Catholics, the rural/Southern theme suggests (to me) Baptists. I’m not aware that Baptists take communion. Grabbing a leftover bun, as silinus suggested, so you don’t starve while you’re being preached at seems more reasonable.

I this version of the song, Jake explains that it means “I had a watermelon and I took a little lady to church.” 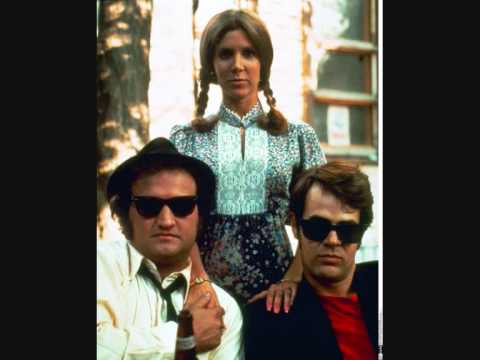 In some denominations, you’re not supposed to eat anything on Sunday morning until after the church service is finished. So a “Sunday go-to-meetin’ bun” would be what you eat on the way to “meeting”, i.e., nothing.

Though I don’t know if that rule is common with Baptists.

I always figured the ‘meetin’ bun’ was a (what do you call that?) stand in for ‘meat and bun’. As in ‘didn’t have any meat’, like the Wish Sandwich. Fits the theme.

I this version of the song, Jake explains that it means “I had a watermelon and I took a little lady to church.”

Yeah, I spotted that after I posted but hoped it would go unnoticed.