The state of Colorado is on fire

First was the fire west of Ft. Collins that is now approaching 100,000 acres and is still only 55% contained. It is the second largest fire in state history and the most destructive with over 250 homes destroyed. It has been burning for 18 days. Next came the Waldo Canyon fire near Colorado Springs - it is barely 5% contained and is rapidly expanding at over 5100 acres.

Just an hour ago a line of high base thunderstorms passed over the Flatirons in Boulder and my mind immediately said “That’s not good.” I looked out my upstairs window and saw lightning strike in the foothills, and sure enough a few minutes later I saw smoke. Now I can see flames. It’s at six acres in less than an hour and evacuations are being ordered within the Boulder city limits.

The one bright spot is that with all the firefighting equipment in the area they are throwing everything at it to keep it under control. I have already seen helicopters and an air tanker dropping slurry.

It’s really a nightmare scenario - the winter of 2010-2011 saw near-record snowfalls, and a warm summer meant a lot of growth of underbrush. This last winter was the opposite, warm and hardly any snow, followed by record heat. It has been over 100°F for four days in a row, a new record. The foothills are a tinderbox.

I once thought about moving into the foothills, but I don’t think I will anymore.

More than 100 firefighters worked overnight — and in the face of shifting winds — to battle the 300-acre Flagstaff Fire and to prevent it from spreading into the city of Boulder. A fede…

I work in the area of boulder that is threatened. I wonder if I will have a job to go to tomorrow.

What does this Mean:
“Pre evac in city of boulder in place now. Be ready to leave: Dartmouth ave on north, west to table Mesa & NCAR area, east to broadway”

Does that mean the evacuation is for north of Dartmouth, or south of dartmouth? Fuck “140 characters” bull shit.

Oh no. You all are dealing with something majorly terrifying. I hope the fires can be “steered” away. (Heard that used on the news yesterday.) Also, on the map it looked like the entire midwest is burning. Is everyone there ready to evacuate if necessary? If so, where do you go?

Hoping for the best for you both.

I have been procrastinating a trip to visit family in Colorado for years. I finally booked my tickets - to fly in to Colorado Springs, then drive north for my visit in Lafayette. This weekend.:smack:

What does this Mean:
“Pre evac in city of boulder in place now. Be ready to leave: Dartmouth ave on north, west to table Mesa & NCAR area, east to broadway”

Does that mean the evacuation is for north of Dartmouth, or south of dartmouth? Fuck “140 characters” bull shit.

It’s for south of Dartmouth and west of Broadway to the foothills. Basically the southwest corner of the city of Boulder. 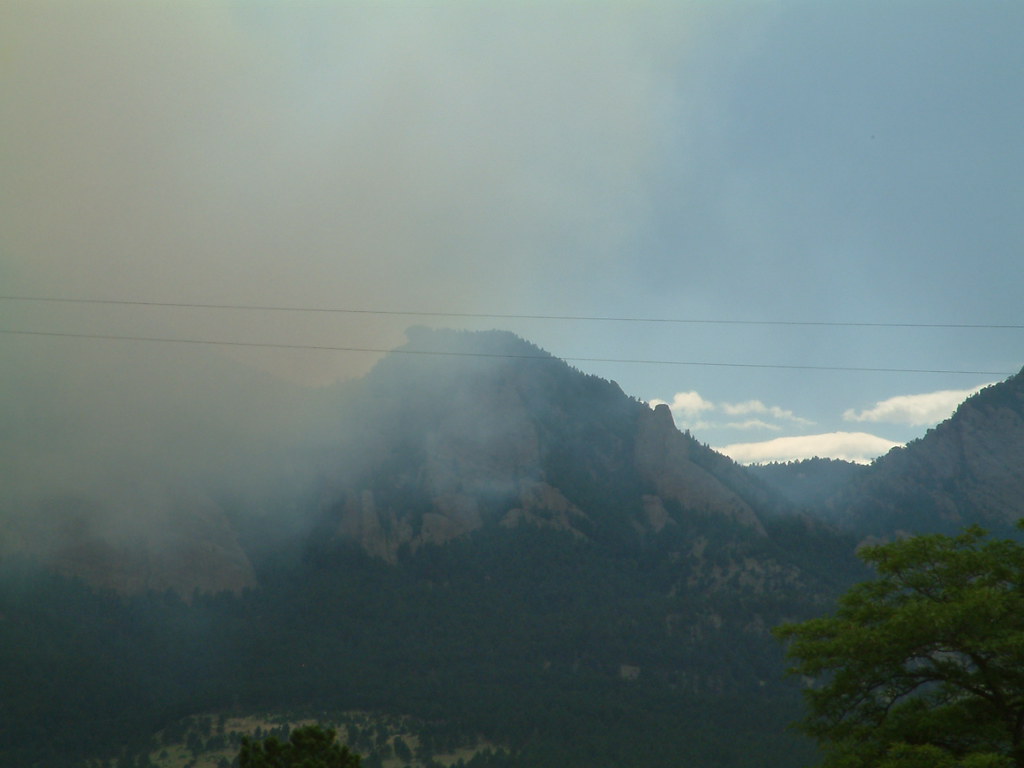 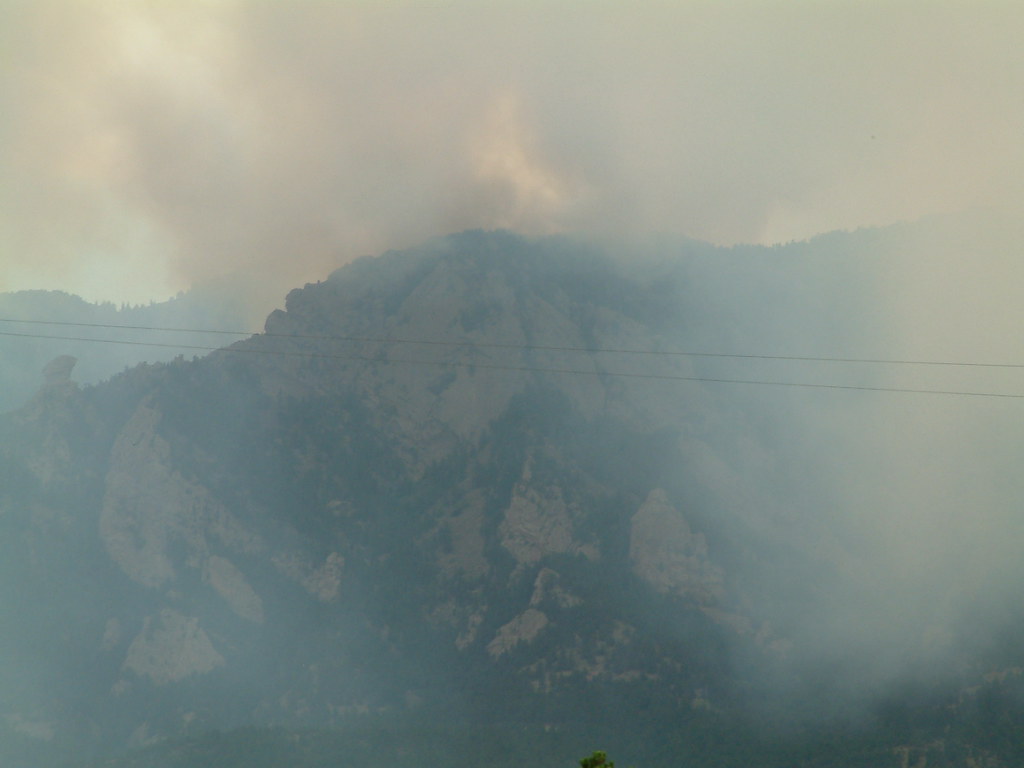 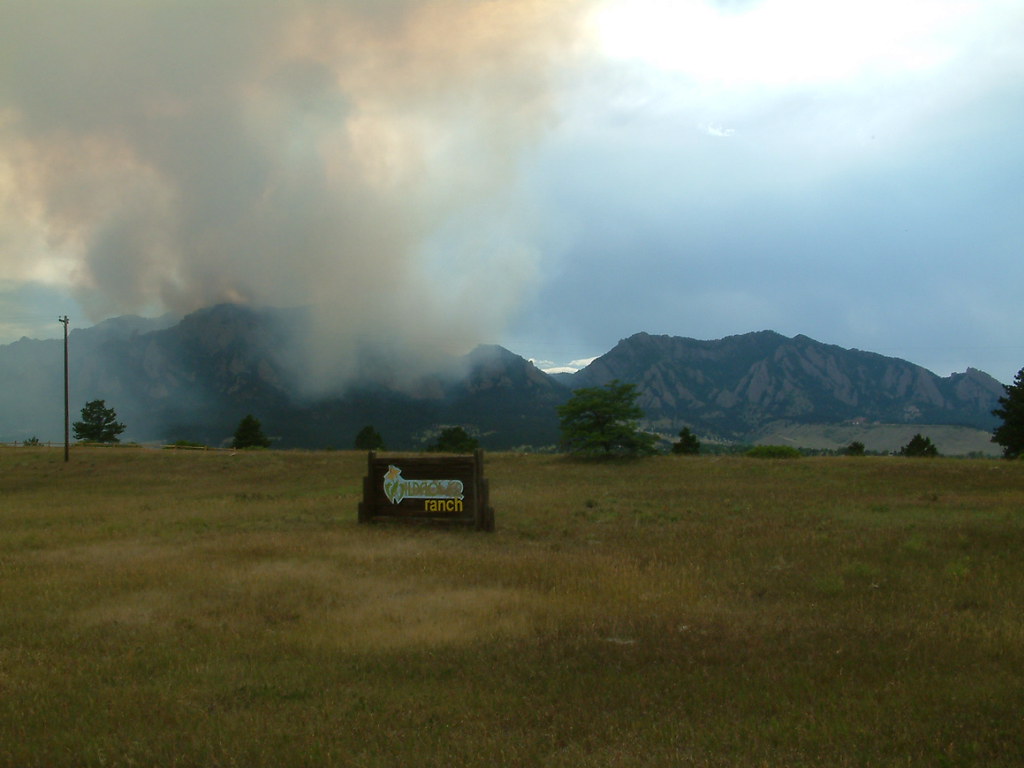 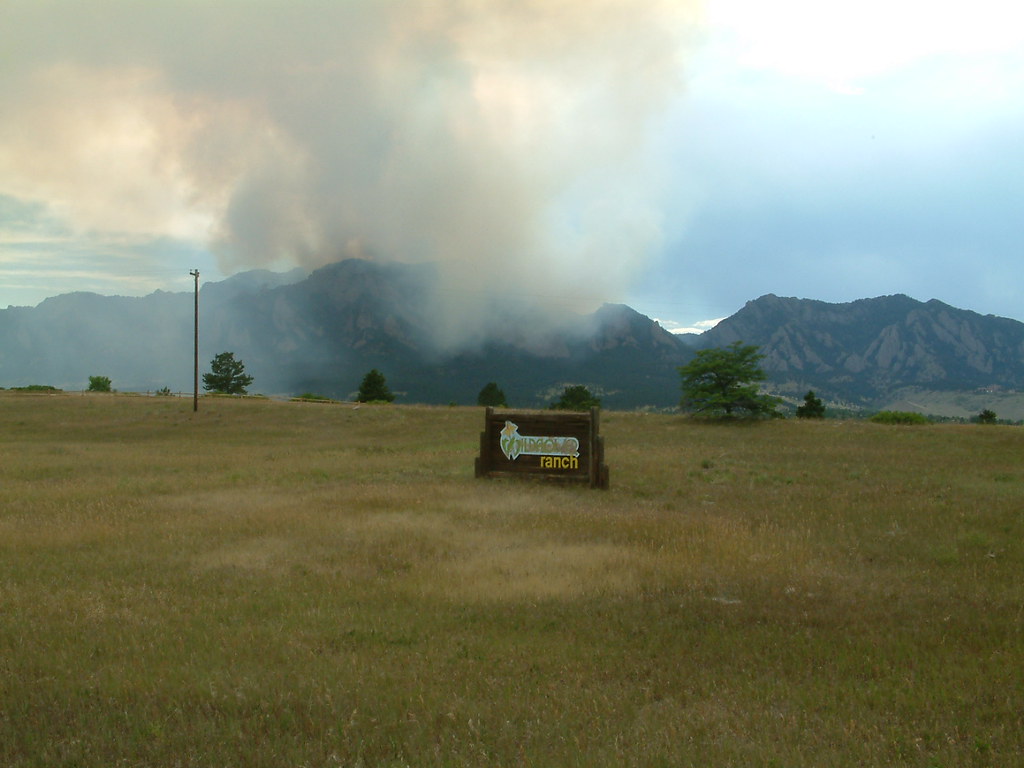 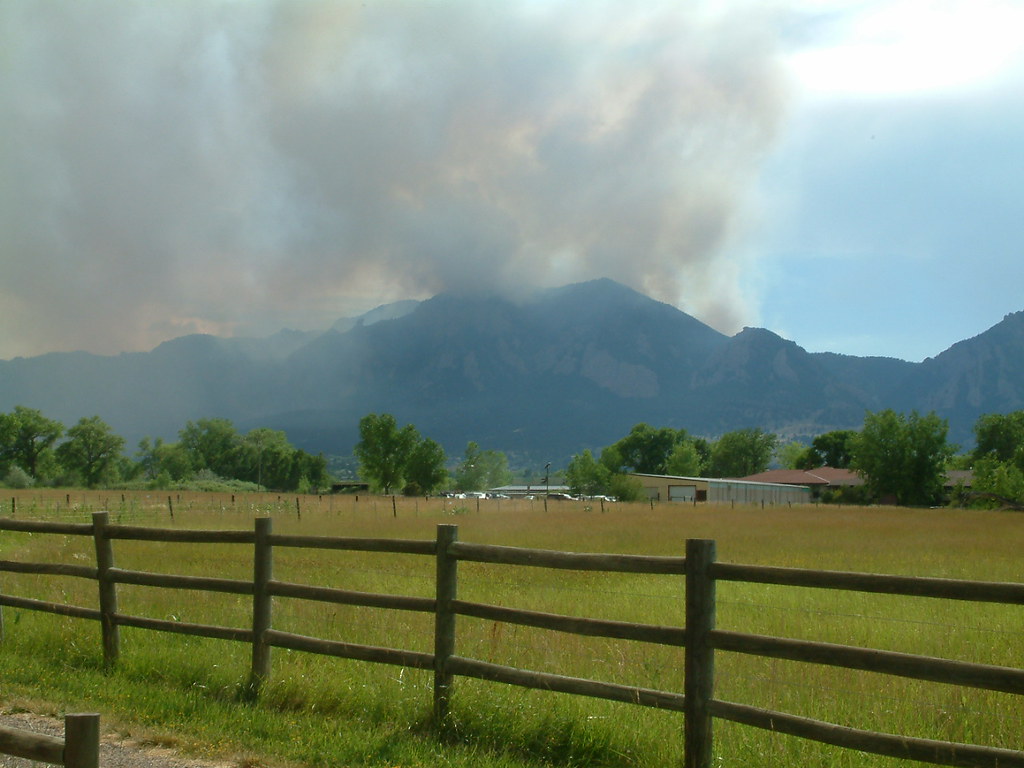 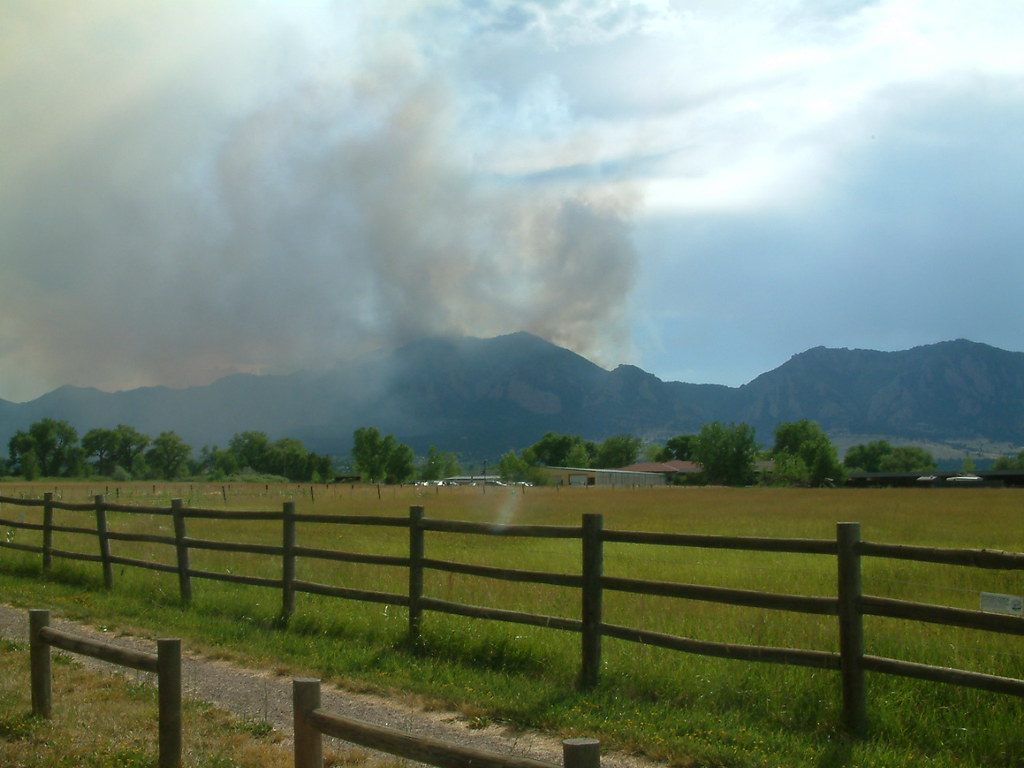 I took these about an hour ago.

P.S. Pre-evac means to get all your shit together and in your car and be prepared to get the hell out in a minutes notice.

Okay, thanks! My restaurant is in that area. I’m glad I’m not there right now. But I also wish I was, to help with the chaos. Scary stuff.

Are you in that area, Lamar? Good Luck and god speed if you are!

I’m about 4 or 5 miles away from the Waldo Canyon fire, which is threatening the western fringe of Colorado Springs. It started Saturday about Noon. Our sheriff is calling it the biggest natural threat in 40 years.

I was checking online news sources late Saturday evening, when I heard a fire truck go past. It turned out that the fire was picking up again. Normally, fires “lay down” at night, but things are so hot and dry here that the normal rules don’t apply. In fact, for much of Saturday afternoon, part of the fire was actually progressing AGAINST the wind. Over the last couple of days, it’s been progressing on three separate fronts.

The smoke gets worse in the evening–as the air cools, it sinks and brings the smoke down to ground level. Sunday evening, there was so much smoke at ground level that it looked like light fog. But we don’t have air conditioning, so smoke or no smoke, we had to open the windows to try to get the house cooled down. The air quality here is considered “unhealthy for sensitive groups.”

According to Gov. Hickenlooper, fully half of the nation’s air tanker fleet is fighting Colorado fires.

I’ve been listening to the Fire Department scanner from time to time. As of a little while ago, the fire finally managed to break through into the western fringe of the city. Apparently, something like 20 structures have burned. My neighborhood is not in danger, and probably won’t be–but it’s a mighty sobering time, I’ll tell you that.

The Waldo Canyon fire is blowing up and structures are being burnt.

There are flames at the top of the Flatirons right now and moving toward the city.

They just said they are preparing to evacuate the Air Force Academy.

I’m in west Colorado Springs. Hot and smokey. There is an eeriness around, like a lot of people have left, and not too many are venturing out unnecessarily. I don’t think the fire is headed my way anymore.

This is just awful. I lived in Denver for about three years and still have friends there.

Were all these fires started by lightning? Or is the cause even known yet?

This is just awful. I lived in Denver for about three years and still have friends there.

Were all these fires started by lightning? Or is the cause even known yet?

Two of them were for sure caused by lightning. The Colorado Springs one might have been arson.

I have cousins in and around Colorado Springs who are on “pre-evacuation” notice and good friends in the mountains south of Boulder. The fires here in New Mexico have been bad enough; in Colorado, there’s enough fuel in the forests for this summer to turn the state into hell on earth.

Although the nearest fire is quite a bit south of us (Weber Fire, Mancos), I’ve been surfing www.ready.gov. It feels like it’s only a matter of time before we get our turn, and I don’t want to get caught totally unprepared. There is info on packing an emergency kit, getting together all your important documents ahead of time, and more.

Here’s the CO Div. of Emergency Management fire map and blog for info on the current fires.

Another good source of information is InciWeb. Colorado fires here.

Fortunately, none here in GJ.

The Colorado Springs fire is going crazy. It went from 6,000 acres this morning to 32,000 just now. The live pictures on TV are terrifying. This photo is of the Air Force Academy - the football stadium is at the lower left.

That was several hours ago.

They just had a news conference about the Colorado Springs Fire. Some douche bag was asking “who’s in charge? who’s calling the shots?” Dude was looking to put the blame on someone, pissed off at the people trying to save lives and property. I was yelling at my TV: You know who is in charge right now? Mother F***ing Nature is in charge right now!

Sorry, that 32,000 number is people evacuated, not acres of coverage. The western side of the city of Colorado Springs is now ablaze. Entire neighborhoods are burning down. Before long it will be entire suburbs.