I loved Lindsay Pavao - she has a very interesting thing going on with her voice, I think. I was surprised Adam didn’t turn around - I thought he’d be good fit for her.

I’m less than halfway through the second show and so far I’m not wildly impressed with anyone except the Mousekteer and Former Tweaker Current Saint Guy (who I can’t believe didn’t get a better response), but I’m mostly here to confess my shame; this show has made me want to do profoundly filthy things to Adam Levine.
It’s okay if you’re judging me. I am too.

You are not alone. I think of Adam as a guilty pleasure. I’m pretty sure it would be a pleasure and I would feel plenty guilty afterwards.

I love her. She was in a band called Automatic Loveletter. They’re on Spotify. Her song “Hush” shows off her raspiness very well.

I been a fan of the band for years and I didn’t even know was going to be on. I was listening and I was all, “why do I know that voice?”

“The Voice” drinking game - take a shot every time the camera focuses on Christina’s over-stuffed bosoms!

Her boobs keep trying to eat her jewelry!

There were a few times last night I was sure Christina was just moments away from a real “wardrobe malfunction.”

I’m curious to see what they do with the opera singer. I can’t imagine how the match ups will work. They both have to sing the same song. It would be very unfair to make someone without classical training sing opera. I can’t see the Opera dude singing rock either.

My takes after Audition #2

Jesse Campbell is my early favorite to win.
I am honestly surprised Blake didn’t turn on Lindsey Pavao sooner. She reminded me a lot of Xenia which was one of his two girls from last season.
The Line not picking Blake? Good choice there :rolleyes:
Chris Mann and Xina? Not a good combo and he is going to be one of the first exits.
Jamar Rogers is a real wild-card in all of this. I can’t say I thought he gave a good performance but there is something there that Cee-Lo may be able to bring out.

Overall, great talent this year. There are a couple that I’m surprised they let go but there will be the wild cards so they will hopefully get a second chance.

It’s refreshing that these coaches are looking for something different as opposed to American Idol who wants singers that sound like 95% of the people out there in the industry.

Okay, I must confess I had never really looked at Cee Lo Green before this season, and I must ask: do you think he has some form of dwarfism? He doesn’t seem to be terribly short when he goes to hug people, but the proportions are…off.

I think Cee Lo has tiny little T. Rex arms, and that’s what throws his proportions off.

Opera dude might do okay with a Muse song. I’m picturing “Resistance” or “Starlight”.

Okay, I must confess I had never really looked at Cee Lo Green before this season, and I must ask: do you think he has some form of dwarfism? He doesn’t seem to be terribly short when he goes to hug people, but the proportions are…off.

Don’t know about the dwarfism factor, but I wasn’t thrilled with his changing up the lyrics of John Lennon’s song, Imagine, on NYE.
When I heard that, I immediately thought of Cee Lo’s hit and sang, “Fuck You” to him, without changing his own lyrics.

Can I chime in on the “dirty things I want to do to Adam Levine” 12 step group? Holy Cow. I know he’s kind of a jackass IRL but I could eat him up. Damn. He looks good.

Saw M5 in 2003 before they were big opening for John Mayer and they rocked the house. You ain’t lived until you’ve seen them sing NiN’s “Closer” - oh hell yeah!

He’s a hot, semi-intelligent jackass. That’s good enough for me.

I loved Lindsay Pavao - she has a very interesting thing going on with her voice, I think. I was surprised Adam didn’t turn around - I thought he’d be good fit for her.

This is the girl who sang “Say Ahh” by Trey Songz, correct? I only caught 2 performances and she was one and wow, she was good.

She was good, but I’m not sure she was “Dia does Heartless” good, and if you’re gonna go that route, you need to be as good or better, IMO.

That said, I do think she had a really nice voice, and one presumes that part of the purpose of the “coaching” is to beat those kind of impulses out of them.

I feel like more than a few of the singers were defeated by their song choices. Backstreet Boys guy, perhaps Grapevine guy, and most certainly Teenage Dream girl, who might (might, it was hard to tell) have an interesting voice, but literally could not have picked a crappier song to showcase it, both in terms of suitability to her (maybe) interesting voice, and just in terms of overall crappiness.

Another night of auditions. At this point all the faces and voices are a blur. Its hard to recall any specific names. I know there were a couple ladies with really weird singing styles that got selected. One of them was imitating Fiona Apple. The other one had a odd voice too.

There’s no way to keep names straight right now. Much less recall who’s on which team.

We still got another night of auditions next week. I’m hoping things will get a lot more interesting once we start the actual competitions.

Pip was really good. Christina has been the most picky and least likely to turn around for a singer. 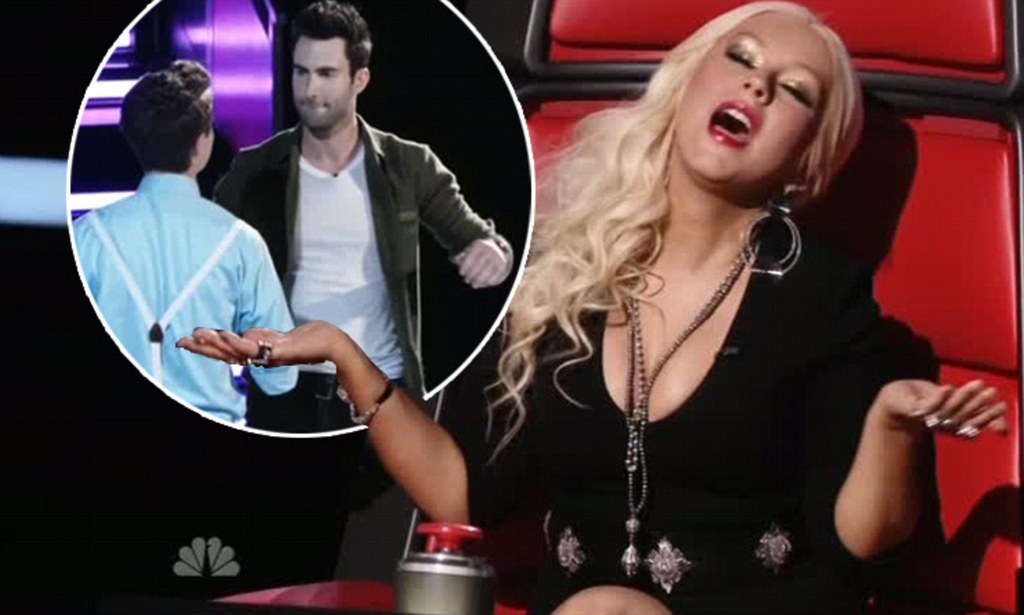 I liked Erin Martin (the model) - she had a very unusual voice, but I liked it.

I didn’t hear what all the judges were hearing from the Bawston kid (James Massone) - he sounded thin and un-interesting to me.

Was there no female judge they could get that wouldn’t be such an egotistical piece of crap as Christina, but still be funny and trade shots with all the guys? None at all?

Who else remembered Jordis Unga from Rockstar: INXS?

Cat Whisperer +1 on the assessment of the Southie James Massone

Who did Erin Martin remind me of voicewise? Macy Gray? Not really. Mrs Cad volunteered Marilyn Monroe and I though maybe Norah Jones for her breathiness but again, that’s not who I’m thinking of. It’s gonna bug me all day now. Maybe it is Norah. I need more coffee.

She reminds me of Lily Allen.