Did Morgan seriously bonk a walker on the head and kill it? Are their skulls made of marshmallow?

I don’t get how Carol shot a wide spray of bullets at those guys with a gun up her sleeve.

I don’t get how Morgan “knocks out” and kills zombies.

That digital blood spray coming out of Daryl’s shoulder was an incompetently done effect. The digital blood sprays on this show are weak, but that was so bad someone needs to be reprimanded. It came from the lower right corner of the screen, not even lining up with his shoulder at all.

These last few eps have really been boring and annoying. Exposition for 40 minutes, with five minutes of plot advancement.

This season is really interesting when you ignore the stupidity of the characters which let’s be honest if you’re still watching you have had to do for many years now.

Personally I’m having a hard time agreeing with Rick and the actions taken by our core group of characters under his leadership this season. I understand that an argument can be made that The Saviors started it with the scene involving Darryl, Abe, and Whats-Her-Name that ended with a boom. However, we’ve seen the group encounter random threats before and deal with them and then that is it. The guys Rick killed when he was with Hershel back around Season 2 comes to mind. Now we get presented The Hilltop and Rick makes an agreement to kill The Saviors to get food for his group and the incident with Darryl is just a weak justification. I also find the justification that eventually The Saviors will find Alexandria anyway so… pre-emptive strike… to be fairly weak. I’m not advocating pacifism here but let’s not kid ourselves. Rick needed to feed Alexandria and he did what he did for that reason alone. The rest is just trying to justify the killing of “other” people.

As a result, I think that there is a level of death, destruction, and personal hurt coming Rick’s way. The Saviors are clearly not good guys but Rick’s hubris led him to starting something that I suspect is far bigger than he imagines. And honestly, to some extent he has brought it upon himself and the rest of the group. I’m not feeling a ton of sympathy at what may come their way.

I don’t get how Morgan “knocks out” and kills zombies.

I think they mentioned at some point in the series (or FTWD) that you kill zombies by causing trauma to the brain. So it’s not that he’s ‘knocking them out’; he’s delivering a fatal blow.

Are their skulls made of marshmallow?

I’ve been calling them ‘Nerf-head zombies’ since the beginning. I’ve never actually tried to stab anyone in the head with a knife, but I suspect it’s more difficult than depicted in the show. I think they tried to explain it away once, saying that freshly-dead people have harder heads than long-dead ones, but that only happens when the plot requires it or for a gag – like the metal-heat zombie last week. The molten metal should have destroyed his brain, and he wouldn’t have been a zombie.

I miss the menacing zombies. I guess it has been clear for some time now that the biggest threat to our [del] stupid [/del] plucky band of survivors is other survivors.

Anyway, I like zombies. I don’t like the revolving door of evil others (Governor, Cannibals, Wolves, and now Saviors). And from what I understand, Negan is perhaps the worst of them all.

Sigh. After the supposed carnage of the final episode of the season, I really don’t want to continue this cycle. But I am weak and I’ll probably tune in next fall anyway.

I’m hoping that the Saviors will be taken out by The Spanish Inquisition, a biker gang fanatically devoted to the Pope who come in completely unexpectedly.

without burning the hell out of Carol’s arm?

But you should see the other guy.

Rick went back to Alexandria.

He headed back there, supposedly. Do we know he actually arrived there?

Did anyone notice Rick walking around with his left hand up in his sleeve, like Carol?

He headed back there, supposedly. Do we know he actually arrived there?

You mean, apart from the scene where he talked to Abe for a couple of minutes after arriving back at Alexandria?

Moreover, I’ve always loved her character becaus she became a sting, capable survivor and fighter, but she was never superhuman. She could shoot and fight and was damned clever, but the unaimed machine pistol up the sleeve made her into “Buffy all grown up and nearing 50.”

Not to mention, what sort of machine-pistol is small enough to hide up your sleeve? Uzis and MAC-10s are still pretty big.
What’s starting to piss me off is how everyone went from totally ninja to 20 guys able to sneak up on them because they are too focused on having some dumb loud-ass discussion while in the middle of a recon patrol in hostile territory.

Rick and Morgan - Well it’s just lucky Carol killed all those dudes and that guy in the barn up and ran away, because they are clearly not paying much attention to their surroundings either.

Plus what is Rick’s bullshit about “not trusting anyone anymore”? He didn’t kill Jesus, and that guy gave him plenty of reason to. He just trusted that they should go off and start a war with the Saviors. He trusted the people of Alexandria weren’t cannibals or psychos or like any of the other assholes they met who also lived in walled communes.

I’m with Algernon. I’m sick of the revolving door of communities full of psycho jerks. What is so great about “Negan” other than he has more inept mooks than the others, carries a bat and is probably going to use it to advance the plot another season?

Speaking of the machine pistol (I was going to ask this in my last post – also never mind where she got it; automatic weapons pop out of the ground down there)… Where did the brass go A) without jamming the MP; and B) without burning the hell out of Carol’s arm?

As long as you asked 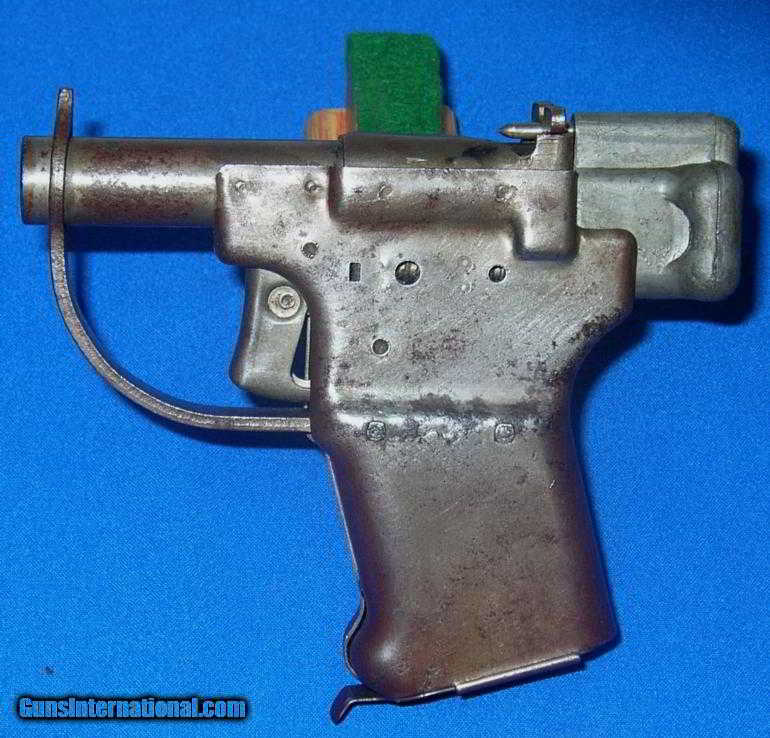 but with more rifled barrels (14-16?). Either in a pepperbox configuration The pepper-box revolver or simply pepperbox (also "pepper-pot", from its resemblance to the household pepper shakers) is a multiple-barrel repeating firearm that has three or more barrels which revolve around a central axis. It mostly appears in the form of a multi-shot handheld firearm. Pepperboxes exist in all ammunition systems: matchlock, wheellock, flintlock, caplock, pinfire, rimfire, and centerfire. While pepperboxes are usually handguns, a few rifle-sized guns were made; Samuel Colt owned...

or mounted to a ring Gatling gun-style. A normal grip wouldn’t be required.

Side-by-side, sixteen 1/2" OD barrels (9mm? caliber) would only be 7.5", which would fit inside a 2.5" circle. Or form a larger ring that the shooter could slip their arm thru in order to drive a car or flip the bad guys the bird. The sequential release of the firing pins will require a little more thought. Reloading sixteen barrels would be time consuming but you wouldn’t have to worry about slides, revolving cylinders, and external hammers hanging up inside a coat sleeve. Plus, no hot brass being ejected.

Of course, the coat sleeve would need to be fire proofed. Aluminum foil and a layer or two of Nomex should do the job. It’s only a temporary solution but that seems to be all that’s required for this type of hide-out gun.

The worst part of this episode was the terrible apple eating sequence. What the hell was that? That would never happen. First, let’s keep an apple next to the bed. Then, let’s eat it first thing when waking up. Then, blindly stick it in the face of the other person, who for some strange reason decides to eat it too! And to top it off, after they each take 1 bite, they put it back on the nightstand!

WTF? That was the worst moment in the episode, the season, and I think the entire series. That was worse than anything Lori ever did.

The worst part of this episode was the terrible apple eating sequence. What the hell was that? That would never happen. First, let’s keep an apple next to the bed. Then, let’s eat it first thing when waking up. Then, blindly stick it in the face of the other person, who for some strange reason decides to eat it too! And to top it off, after they each take 1 bite, they put it back on the nightstand!

WTF? That was the worst moment in the episode, the season, and I think the entire series. That was worse than anything Lori ever did.

I think the point was “Look at this great food we got from Hilltop because we took out the Saviors.”

But it was still dumb.

I thought it was to get rid of morning breath since they were out of toothpaste (no idea if Hilltop had any of that to spare).

I thought it was Bone mocking what he considers to be complaints about minutia.

No seriously - I really hated that scene. I loved this show. But it’s been on a steady decline and the poor writing is standing out more and more taking me out of it. That apple scene was so colossally stupid. And it was minutia but man.

You mean, apart from the scene where he talked to Abe for a couple of minutes after arriving back at Alexandria?

Yeah, apart from that!

Y’know… fuck all the other characters. I’d tune in every week to see Carol cutting a bloody swath across the post-apocalyptic landscape. If rumours are true and a major character is going to be killed off, I can’t seem to bring myself to care as long as it’s not Carol.

If it is Carol, then I’m probably done with this show.