The Watch hate-watch (all spoilers all the time.)

Sybil was radicalized by seeing her parents murdered when she was a teenager, but the Watch couldn’t so anything because it was an offical inhumation with a receipt.

Meanwhile, the assassins are a weird mask-wearing anonymous cult with code names (and lots of Nazi-red wall hangings.) Sybil has the mask her parents’s assassin dropped, walks in through the front door, but abandons the mission to try to get revenge on the assassin who killed her parents.

Meanwhile meanwhile, Carcer is watching through Vimes thanks to a spell cast by Wonse.

In a small detail, Sybil brings Cherry a small dragon to study. Every day it needs to be fed 18 pounds of dead snakes and mice (so no coal, lamp oil, the legs, etc.)

We find that Carcer indeed works for the Auditors of Reality, though they are not named in the show and are labled “Observer” in the captions. His job is to destroy Ankh-Morpork, but apparently only the Watch are the real problem. There is some gibberish about their opening their imaginations and hearts unraveling reality or something.

In this episode they finally find the sword they were looking for last episode. It talks. It involves a glurgy story about the Power of Love that was telegraphed from a thousand miles away. Hewey Lewis did not appear.

There are several more emotional scenes–this episode has more schmaltz than Schmaltzberg, or approximately 0.4 episode of Star Trek Discovery.

Also, there is an Igor. He is a surly, violent bad guy who talks and walks normally and looks like this 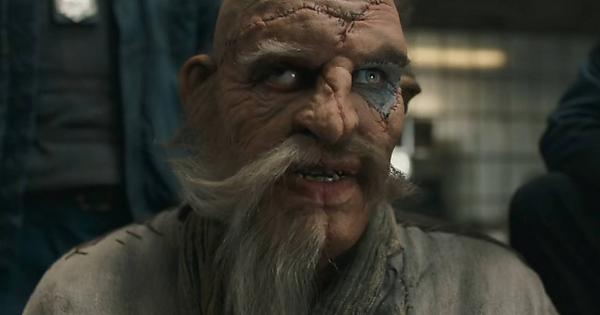 and has pretty much none of the aspects of an Igor other than the scars.

Two more episodes have come and gone. The traces of Pratchett’s Discworld–wherther in plot and character elements or in depth, intelligence, wit, or meaning, are even fewer and farther between, and what is offered instead is so unrelentingly awful that I can’t raise the interest to attempt to catalog it.

Both my wife and i are enjoying it.

I have come to the conclusion that you and I have very different tastes in shows.

Nearly every show I have liked, you hated, and vice versa. Not passing judgement.

I dont remember you at all, sorry. What show do you like that I have hated?

Mind you, we dont think The Watch is great- just fun enjoyable TV.

The only one that pops to mind is Preacher.

I have never watched that show. I didnt care for the one comic book I read, due to the fact it promoted smoking.

Okay, I will mention something from episode 6. This episode’s Mcguffin Quest requires a visit to Cherry’s dwarf mine. Turns out that the reason dwarfs have beards is because The Dark hates differences so everybody needs to look the same. So Carrot, Cherry, and Angua put on fake beards and go to the dwarf mine, which is operated exclusively by normal-sized people in normal clothes who are dwarfs. Turns out that the dwarfs are on the bad guy’s side, Cherry’s parents are dead, and the main dwarf in the mine is Cherry’s jilted lover who was originally supposed to run away with Cherry from Cherry’s mean intolerant father.

So, in a moment straight out of The Empire Strikes Back, the betrayal is revealed, Cherry is chaned without her fake beard, and The Dark takes her. Except that it turns out that The Dark is just misunderstood and is basically Danny the Street. Cherry is met by her beardless, dress-and-glitter-makeup-wearing mother who explains how much The Dark loves people being different. Cherry then is teleported to the rescue of Vimes and others, defeating Dr. Cruces and the Assassins Guild by doing a fabulous bearded song and dance routine (with backup dancers) that is also magic.

It’s watchable, but not great . I’ll probably keep watching it. Three main quibbles. It’s not funny, they kill Detritus and no Nobby.

Wouldn’t it have been funny if they got Norm McDonald to do the voice of Death.

Points for casting Matt Berry as the voice of the sword, though.

Points for casting Matt Berry as the voice of the sword, though.

It took me quite a while to pick out who that was. I was going “Eddie Izzard…no, Tim Curry…no, who has that blend of pompous and incompetent…Aha! The dude from What We do in the Shadows.”

And agree, watchable, fun, but it’s not Discworld.

Matt Berry is a busy guy. Watch Toast of London to see what he can do.

And agree, watchable, fun, but it’s not Discworld.

It is a alternate universe Discworld. pTerry said there are many.

I’ve just spotted the first two episodes of ‘The Watch’ on very late night BBC2 (I assume they are ashamed of it.)

I am confused by it because:

If they wanted to appeal to Discworld fans, why not stay with the original characters and just have an introduction to explain we were in a parallel Universe?

Honestly, it’s like somebody decides to have an adaptation of Sir Arthur Conan Doyle where Sherlock Homes is an estate agent and Dr. Whatson is a TV critic.

I think Discworld does not adapt well to the screen since the majority of the best jokes and charm are in the narration portion of the story.

All the TV-movies I’ve seen haven’t captured it and kind of make it look very silly.