Several years ago, my Grandma told me about a man known as the “Wonder Bread Giant.” He was apparently some sort of mascot for Wonder Bread. I don’t know exactly how tall he was, but I’m quite certain that he was over 7 feet–my impression is 7’ 4", but I’m not sure.

I have tried to learn more about him, but Wikipedia, rather astonishingly, doesn’t have an article. I’ve tried Googling his nickname, lists of tallest people, and everything else I can think of, but no significant results. About the only thing I’ve found at all was a comment somewhere written by someone who had seen him at some event.

Does anybody know his real name, or anything else about him?

Maybe she (or you) was misremembering, and was really thinking about the Jolly Green Giant?

Or maybe she was a pro wrestling fan and was referring to Andre the Giant.

Or the Stay Puft Marshmallow Man?

No, there’s no way that it could be a case of mistaken identity. Somewhere–and of course I can’t find it now that I want it–my family has a picture of this man dressed in sort of a baker’s work uniform.

The only concrete mention of him that I have been able to find on the internet is on this page. Scroll down to the top comment. 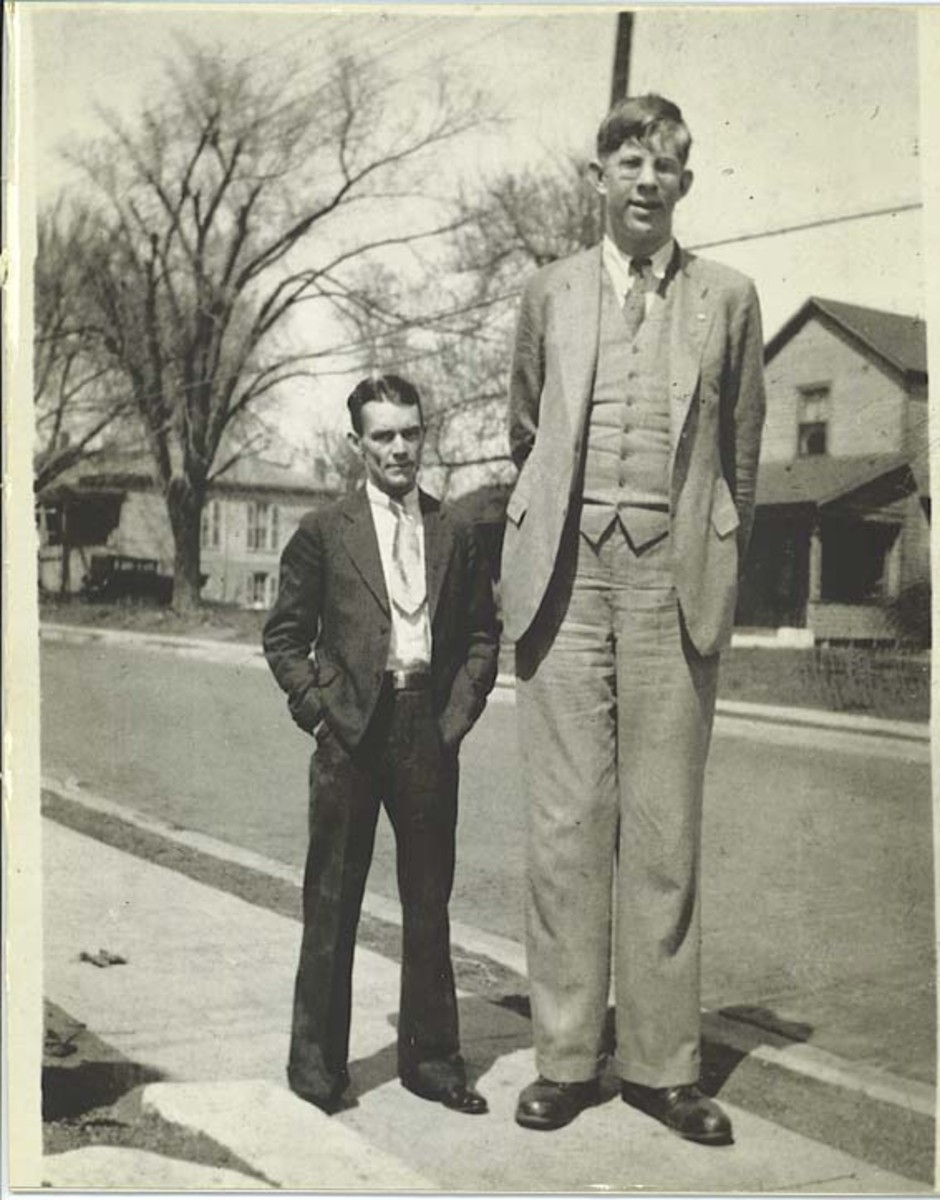 Tallest person in the world was Robert Wadlow. Gigantism and acromegaly were responsible for Wadlow's growth. A benign tumor adds pressure on pituitary causing excess growth. Wadlow was over 8 feet.

I too have vague memories of a “wonder bread” giant.

I would estimate he must have flourished during the Kennedy administration.

Never heard of a Wonder Bread man. Maybe it was that tire mascot, a being made from tires?

Wonder Bread has been around for a long time, and changed ownership several times also. There were plenty of opportunities to have an advertising campaign with a giant in it. Their slogan was something like “Building bodies in 12 different way”, so using a giant to demonstrate the growing ability of the product would make sense.

Was he purple and crashing through walls and going, “Oh, yeah!”

Here’s another reference. Apparently he was quite real.

Heading back west we come to a building that is some town government place. It used to be the grocery store. The best memory from this store was the time the Wonder Bread Giant visited and gave away little loaves of Wonder Bread. I’m living proof that Wonder Bread helps build strong bodies 12 ways!

So that’s flyer, me and two guys on the Internet who remember him…

Was it the Wonder Bread He Man?

My wife remembers him too, a really big, tall white guy in a white and red uniform of some kind.

Definitely not the Wonder Bread He-Man.

I’m wanting to say he was called “Chris, the Wonder Giant.”
He was on either Captain Kangaroo, as a guest, or else on some local children’s show in about 1966, at least. I remember meeting/seeing him at some store. Don’t remember his face, tho, or his uniform.

I’m wanting to say he was called “Chris, the Wonder Giant.”

Back in the mid 1960’s, it was Kris the Wonder Giant who walked the streets of Victoria, according to the personal testimony of Mike Wartman, former resident of Victoria and long standingcolumnist for the Victoria Gazette. That Wonder Giant was a spokes-man for white ready-sliced Wonder Bread.

My sister and I still remember the day that Kris the Wonder Giant came to the store on a publicity tour. Kris was indeed close to seven feet tall, a genial German fellow who came to the store wearing a white baker’s uniform topped by a chef’s toque. He spent an afternoon giving out miniature loaves, patiently posing for photos with gawkers, and hoisting the smallest children on to his shoulder for a thrill. (I was one of those kids. Atop Kris’ shoulder, I think I could see into Herkimer County.) I don’t remember, but my sister does, that at the end of his stint a Wonder Bread factotum pulled up to take him to his next booking . . . driving a Volkswagen Beetle. Poor Kris.

And here we see a newspaper ad from Fergus Falls, MN on July 8, 1964 touting an upcoming visit of Kris the Wonder Giant to the local Piggly Wiggly.

Ditto for an appearance at another locale on June 6th, 1963.

Sadly, doing an image search for Kris the Wonder Giant hasn’t produced a pic yet.

I did a web search for “picture of kris the wonder bread giant” and came up with [=wonder%20bread&filters[primary]=images&sort=1&o=26"]this picture](http://media.photobucket.com/user/VickiPerri/media/WonderBreadGiantatWestSideGrocery.jpg.html?filters[term).

Oddly…it’s in someone photobucket of Wonder Bread pictures.

I did a web search for “picture of kris the wonder bread giant” and came up with [=wonder%20bread&filters[primary]=images&sort=1&o=26"]this picture](http://media.photobucket.com/user/VickiPerri/media/WonderBreadGiantatWestSideGrocery.jpg.html?filters[term).

Oddly…it’s in someone photobucket of Wonder Bread pictures.

Good job! We have a thread winner!

Gee, looking at him brings absolutely no memories of him back to me…