I’m just ashamed that it took us two days. My apologies.

And here we see a newspaper ad from Fergus Falls, MN on July 8, 1964 touting an upcoming visit of Kris the Wonder Giant to the local Piggly Wiggly.

Ditto for an appearance at another locale on June 6th, 1963.

Newspaperarchive requires registration to view. Looks like I exceeded my quota of one already.

Newspaperarchive requires registration to view. Looks like I exceeded my quota of one already.

Wait until tomorrow for the second one. That’s what I’m doing.

Wait until tomorrow for the second one. That’s what I’m doing.

And it says that at the Food King in Greely, CO, “KRIS The Wonder Giant Will He At Our Store SATURDAY 1 to 2 p.m To Pass Out Miniature Loaves of Bread and Autograph Them”. That’s June 6, 1963.

I wonder if anyone saved their autographed loaf…

I figured that somebody somewhere had to know something about him.

Thanks to everybody who was able to dig up part of the story.

For once, zombies rule.

He told us how his city was destroyed during the war. Hope this helps you.

Looked for picture, but I know it’s around here somewhere. But, Mahaloth shows a picture of the guy I’ve seen. My father referred to him as Jake the giant, but I see they call him Chris. I believe he was from Cologne Germany.
He told us how his city was destroyed during the war. Hope this helps you.

It sure would be nice if you could find and post that picture. We at SDMB love to have corroborating evidence and your personal experience is interesting. Hope you stick around.

I’m 59. When I was in first or second grade the wonder bread giant came to the FairWay store in the rural town where I lived. Dale…the store owners son decided He would see if the giant was on stilts so he snuck up on his hands behind the giant and lifted the giants pant leg. The giant kicked Dale away and he was sure not using stilts! He was indeed a friendly guy and all of us kids shook hands with him. You must remember that the wonder bread slogan was it would build your body 12 ways. I guess they thought kids wanted to be giants.

I remember a “giant” visiting the IGA store (this is a grocery store) in a small Ark. town where we lived when I was very little. I’m 50 so probably this would’ve been late 60’s or very early 1970s. I don’t recall it being the Wonder Bread giant specifically but definitely recall the word “giant” being used in reference and recollection of the man seeming enormously tall to me. There was an air of festivities in the store when we went to see him, with balloons and I think maybe hot dogs and drinks, so it was probably a promotional event.

I bet it’s the same guy as others are citing. Thanks for asking about this, as my whole life I’ve had a vague memory of “that ‘giant’ guy we saw at IGA” but not a clear enough memory to know what the heck it actually was!

I’m 59. … You must remember that the wonder bread slogan was it would build your body 12 ways. …

I’m older than that. I remember (and I think this is verbatim): “Wonder Bread helps build strong bodies 8 ways” (as I remember Buffalo Bob Smith telling us on the Howdy Doody Show), but was adjusted to “12” sometime in the 1950’s.

Previous thread on the subject: http://boards.straightdope.com/sdmb/showthread.php?t=338654

The campaign by Wonder Bread started in 1963 with them introducing a “Giant loaf of Wonder Bread” and Kris to promote it.

I’m older than that. I remember (and I think this is verbatim): “Wonder Bread helps build strong bodies 8 ways” (as I remember Buffalo Bob Smith telling us on the Howdy Doody Show), but was adjusted to “12” sometime in the 1950’s.

Previous thread on the subject: http://boards.straightdope.com/sdmb/showthread.php?t=338654

Did Kris ever appear in a TV, movie short (it happened), or billboard campaign? Why not ask about radio? Why pay a giant for radio work, unless people are expecting a known voice?

If he did just in-person promotions, it would explain why memories are so spotty.

I have no memory of him

Why pay a giant for radio work, unless people are expecting a known voice?

Remember that people went absolutely nuts over a ventriloquist act on the radio.

If they did, it was probably due to the dialog (witty banter?), not because it was a ventriloquist.
IOW: What was said, not how it was said.

Check this out y’all: Santa Klaus: How that giant German soldier arrested by a tiny Tommy became a big hit in America after the war.

No mention of a stint with Wonder Bread, but I’m gonna be surprised if that isn’t him.

Here are some pictures of Jakob Nacken He definitely looks like the picture of the Wonder Bread Giant, and his name matches lynx62’s rememberance of him being “Jake the Giant”.

SEE THE WONDER BREAD GIANT (KRIS NACKEN) TODAY AT JERRY’S SUBURBIA 9:30-4 P.M. KRIS NACKEN WILL BEAT JERRY’S ROYERSFORD SATURDAY NOVEMBER 14 9:30 to 4 P.M. COME ONE … COME ALL … SEE KRIS- The Friendly II onder Bread (riant ( 1 1 Jerry’s KRIS, the Friendly Wont?er Bread Giant, is actually Kris Nacken, an experienced food, restaurant and hotel man, who has also appeared through* out the world on stage, screen and television. Today, he is a public relations man for the Continental Baking Co., maker of Wonder Bread and Hostess Cake. KRIS is no circus freak. Although he is one of the biggest men in the world —7 feet 4 inches tall—at 235 pounds he is husky, well proportioned and an Mcellent athlete. Now 56 years old, KRIS was born in Cologne, Germany, and comes from an old restaurant and hotel family. Both of his parents were tall—his mother was 6 feet 8 inches, and his father 4 inches shorter. He has one brother who is 6 feet 11 inches, a sister 6 feet 9 inches, and a younger brother-the shorty of the family- who is 6 feet 6 inches. 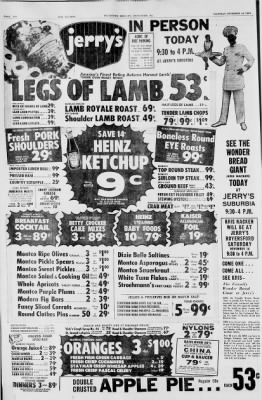 The Mercury from Pottstown, Pennsylvania on November 12, 1964 · Page 6