You can see some photos of Yanukovych’s compound here. Check out the gold banknotes in his image, his initials everywhere, and well, the galleon.

Impressive. In that one picture which looks like a shot from behind his desk, was that a cubby full of batons I saw? Who needs that many batons?

Tymoshenko is speaking right now in the Square.

You do not need to speak the language, it is an incredible and amazing historic moment to see.

What exactly is going on in the live feed? I don’t speak Ukrainian, but the camera is focusing on the crowd, where there seems to be streams of hospital workers or police walking through the crowd?

I speak Russian, but am far from a native speaker. I only get maybe 20 - 30% of the Ukrainian depending on the speaker’s accent and the subject matter, but earlier in the broadcast there was a full-on funeral service for a dead protester, with half a dozen Orthodox priests, lots of singing, etc. Lots of “glory to the heroes, to Ukraine, to the martyrs,” stuff you might expect under the circumstances. I am just hoping things stay calm. There is a lot of anger bubbling not very far under the surface.

You can see some photos of Yanukovych’s compound here. Check out the gold banknotes in his image, his initials everywhere, and well, the galleon.

Heh, that same sarape or flag wrapped guy with stolen police helmet and shield is seen accompanying other people that took the compound playing golf with the monogrammed Yanukovych clubs. 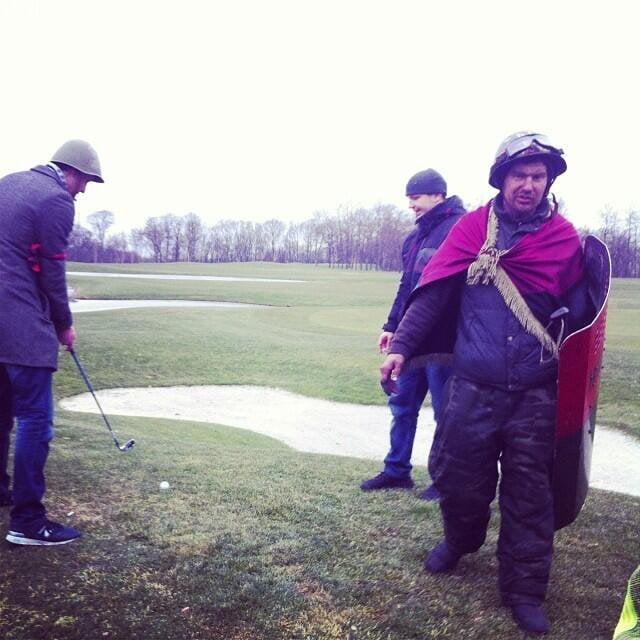 Still, the bastard Yanukovych has a point, new elections need to be called ASAP.

They are speaking Ukrainian most of the time, not Russian. I am amazed at the wide dialect variation among the speakers. I can understand some of them much better than others.

It’s Ukrainian, not Russian. I am a native Russian speaker, and I can understand 30% to 50% of what is said. I just turned on the channel, the number of people in the square is definitely way higher than it was when there were barricades there. I bet in the coming weeks/months and especially years the number of people who manned the barricades will grow and grow.

This too is my favourite angle of examining world events…

Canadian hockey teams shut out the US in gold medals!: But how will it effect the Jews?

Italy announces youngest PM: But how will it effect the Jews?

Revolution in the Ukraine: But how will it effect the Jews?

Seriously, OP doesn’t strike me as having a consuming concern about the well being of The Jews as it is about hyperbole and histrionics.

But I thought the Jews caused all those things.

You can see some photos of Yanukovych’s compound here.

He’s obviously corrupt. There is no way an honest man could keep all those Soviet cars in such good shape and, probably, running.

There is no way an honest man could keep all those Soviet cars in such good shape and, probably, running.

Running? Are you accusing him of corruption, or witchcraft?

So what are your predictions now that Yanukovich has been ousted?

My prediction is this, and bookmark this page for future reference:

By the end of 2014 Ukraine will have US supported jihadists running wild just like Syria and Libya etc. :rolleyes:

TV reports here are saying that the **chief rabbi in Ukraine is warning all Jews should leave the country.
**

I would think the heads of the churches will be saying the same thing soon too.

For sure the American president seems to have it in for Jews and Christians!

Advice here: someone with a track record of being soberingly, consistently wrong on every foreign policy issue should not make predictions. You’d do better to repost what Joe Biden says and try to pass it off as your own views.

I think Ukraine 2 USA 1, I think it’ll be very difficult for the USMNT to travel there and get a result. The game might be called off though 'cos apparently there’s other stuff going on there at the moment though.

Revolutions in Ukraine don’t get put on hold for football? That shit doesn’t happen in Central America, where the people are proper FANS.

I don’t know how quickly but this is my main fear. I consider it very likely there will be a call by some in eastern Ukraine for protection from the “fascists/terrorists”. From the NYT:

Regional governors from eastern Ukraine met in Kharkiv and adopted a resolution resisting the authority of Parliament. They said that until matters were resolved, “we have decided to take responsibility for safeguarding the constitutional order, legality, citizens’ rights and their security on our territories.”

With the large ethnic Russian population in eastern Ukraine I expect there to be calls from some in that region for Putin to send troops. From the same link as above:

Mr. Yanukovych said in his television appearance that he would be traveling to the southeastern part of Ukraine to talk to his supporters — a plan that carried potentially ominous overtones, in that the southeast is the location of the Crimea, the historically Russian section of the country that is the site of a Russian naval base.

I have grave concerns this situation will get much worse before it gets better.

According to CNN the Ukrainian Parliament just votes unanimously to remove Yanukovich from office.

Sorry, force of habit from previous coups, IMHO **how **that vote took place will tell us a lot of what will happen next.

In Honduras it turned out that there was another “unanimous” vote supporting the expulsion of the president. The vote came as unanimous because the supporters of the deposed president did not go to the congress to vote as they were in hiding or protesting the coup. In the end the coup plotters had to let elections take place and the deposed president was exonerated and returned to Honduras as it was clear that things like the resignation documents used for the removal vote were fakes or signed under duress by the military of Honduras.

If that unanimous vote in Ukraine was made with many members of parliament that are from the south and east side of the country then Yanukovich is toast, but if it turns out that that vote was not really as unanimous as it looks then this could turn bad quickly.

There’s 450 seats in the Ukrainian Parliament. 328 is a pretty significant supermajority regardless of where those other 122 legislators were.

I am concerned what Putin will do after the Olympics ends. He obviously wasn’t going to spoil his winter show by reacting to the Ukraine. The next few weeks will be the most critical. I think thats when Putin is most likely to do anything.

I hope they just allow the elections. The votes will still divide between the Ukrainian and Russian peoples. They’ll both have representation in the Ukrainian Parliament. That would be the best outcome. Whoever gets the top job will still need to represent both peoples.

There’s 450 seats in the Ukrainian Parliament. 328 is a pretty significant supermajority regardless of where those other 122 legislators were.

Well, that is part of what I feared, now we can count with supporters of Yanukovych pointing out that those “unanimous” declarations are not the whole truth.

Does anyone know how many from the south and the east voted to remove the president? And what exactly was the vote about? A request for him to step down or an order?

I predict that the US government and other Western powers will eventually be outed as the impetus for the revolution if not for providing material support. The lapdog media ignored the substance of the Nuland call because it was evidence of such a conspiracy. They instead participated in gossip and speculation about who recorded the call. Nuland also gave a speech where she boasted of 5 billion dollars spent in Ukraine to give them the “future they deserve”. With the participation of John McCain visiting the “protesters” just as he visited the US backed opposition in Syria, we have circumstantial evidence of US meddling. We had a situation in which a powerful US senator is openly showing support for an opposition calling for the overthrow of a democratically elected government with other US officials plotting in the darkness about who will be installed in power. It is absolutely incredible that nobody in the media is pointing this out. What if Vladamir Putin visited an armed Tea Party encampment in Washington DC calling for the ousting of Obama from office while Dmitri Medvedev was recorded on the phone about a plot to install Ted Cruz as president? It is absolutely shameful behavior. Ukrainian police showed incredible restraint for months before the fascist (quite literally) elements of the opposition could no longer be ignored.

This is going to end terribly. The US timed this so that Putin would be hamstrung with the Olympics. It is an incredibly reckless move by the US government. I just hope that Putin backs down. They should work out a solution whereby the country is split up, that’s the only peaceful way out. Otherwise you’ll have a war over control of the state apparatus that could be catastrophic.

TV reports here are saying that the **chief rabbi in Ukraine is warning all Jews should leave the country.
**

If this is true, it’s likely because the US backed opposition contains paramilitary elements of the fascist anti-Semite party Svoboda.

Euromaidan: The Dark Shadows Of The Far-Right In Ukraine Protests

Svoboda, an extreme right-wing political party, has representation in parliament and has been dubbed by its critics as a neo-Nazi organization.

If this is true, it’s likely because the US backed opposition contains paramilitary elements of the fascist anti-Semite party Svoboda.
http://www.ibtimes.com/euromaidan-dark-shadows-far-right-ukraine-protests-1556654

Yes this is true
so is this a ‘multinational coup’ and toppling the democratically elected Yanukovich in Ukraine?