In the 1980s, a friend of my family visited the USA and returned with two things for us. Amway (don’t want to talk about it), and a cherry pie in a can.
This was a whole cherry pie, maybe 7 inches in diameter, sealed in a pie shaped can - similar in form factor to the Fray Bentos canned (savoury) pies we have here in the UK:

Does anyone recall this product? I don’t remember the brand, only that it was in a can this shape, with a general white and cherry-red design, maybe some gingham type print on the can. I do recall the ingredients being a horrific list of artificial stuff (I think the cherries may not have been actual fruit but instead, sort of reconstituted cherry-pulp-and-jelly spheres)

Wow. Not recognizing that at all.

Cherry pie filling in a can is bog standard stuff in the US. Cherries, sweetener goo, pectin, etc. Just dump the contents into a frozen store-bought piecrust, bake for 30 minutes, & Viola! Homemade pie!

For very ersatz values of “homemade”.

But a complete canned pie? I can’t recall even a close cousin of such a thing.

Nope, and I would’ve been first in line to buy something like that in the 80’s.

I don’t remember ever seeing something like that. I just asked mom and she doesn’t remember entire canned pies either. Both of us are from the west coast, USA.

Could it have been Cherry Cobbler?

Nope, and I would’ve been first in line to buy something like that in the 80’s.

Yeah, me too, at least to try it. Cherry pie is my favorite. And being canned doesn’t necessarily make something less good. Hard for me to believe this was ever even slightly common in the US in the 80s.

I do recall canned bread but not pie. Although I came from a pie baking family. Cherries seem to process pretty well. If you buy those 3" pies the blueberry ones are just jelly but the cherry has real fruit.

This is the first I’ve ever heard of Fray Bentos. Think I’ll order some online.

I’m curious how the crust stays even remotely crust-like.

I’m curious how the crust stays even remotely crust-like. -

Based on the OP’s latest video, it sorta doesn’t. 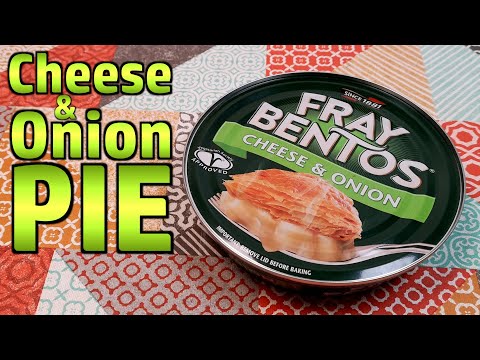 Ah I was assuming some sort of wonders-of-chemistry ready-to-eat situation. My bad for not viewing before posting.

Thanks - yeah, it was handling and opening this can that brought back the memory of the cherry pie - and I idly hoped that I might be able to get hold of one for the series (but alas, it’s almost like it never existed and I imagined it, but I’m sure it was real)

Could it have been Cherry Cobbler ?

It said cherry pie and the picture on there was a pie with a slice out of it. I think it might actually have been a full pie with a bottom crust, maybe canned after baking and preserved by some other method than the normal cook-inside-the-can method

I know there are frozen cherry pies, but I’ve never heard of one that’s canned.

I might be misremembering, but I feel like the top lid of the can was printed with a very similar design to that. I wonder if it was a Sara Lee product…

FWIW Sara Lee’s logos have changed very little since the 1980s, so that may help you.

Americans just aren’t used to eating things like pies from cans. I’m wondering if this wasn’t something Sara Lee (or another company) produced specially for foreign markets.

Or it could be something that was test-marketed for a short time and proved a failure - and the OP’s friend just happened to be visiting the States at the time and snagged a few.

Same here. I’ve been known to eat cherry pie filling straight from the can so this would have been right up my alley.