I just got turned on to the game Vampire Survivors. It’s a “simple”, fun waste of time for 15 or 30 minutes that sees you coming back for more.

It is still in Early Access but the developer seems to be putting out patches and content at a brisk pace.

By “simple” I mean the game could hardly be easier to start playing. No aiming or anything. Just run around avoiding monsters while your character auto-shoots whatever he/she has equipped. That said, you finish a level surviving for 30 minutes and I have yet to break 15-minutes.

You get random loot drops you can use to equip/upgrade your character. How you choose to do that has a major effect on how that match plays (again, also subject to randomness…you don’t always get what you want). Of course, some weapons synergize better with certain things so you hope to get those items.

The number of monsters chasing you easily gets in the hundreds. Kind of a slo-mo bullet hell.

The game looks and feels…cheap (it kinda is but unabashedly so). It starts off slowly too. It takes time to unlock items and weapons and characters and maps. But it seems there is always something else around the next corner to keep you playing.

Hard to explain but it seems to be super popular and at $3 (currently on sale for $2.69) it is hard to go very wrong (and you could always return it). 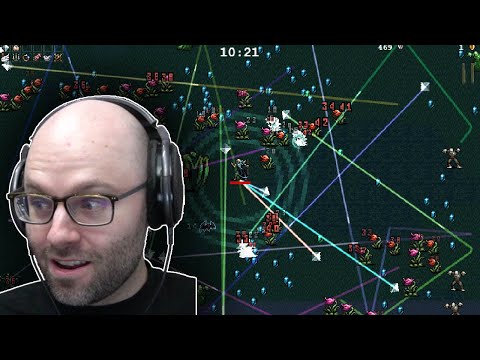 I bought yesterday on sale (10% off! Saved 30¢!) based on recommendations from friends. I know a couple people who tried it and they all spoke very highly of it and thought it great fun.

You get random loot drops you can use to equip/upgrade your character. How you choose to do that has a major effect on how that match plays (again, also subject to randomness…you don’t always get what you want). Of course, some weapons synergize better with certain things so you hope to get those items.

One thing to mention here is that it is a rogue-like, so you also get coins which can be used to purchase permanent upgrades. I’ve fully maxed out and it’s pretty rare for me to not hit 30 minutes now (although the latest level they added is tough).

It’s fun going from a guy plinking bats with a axes to a whirling vortex of death.

In my opinion, this game is ridiculously underpriced. I’ve had a ton of fun with it.

I was having my best run yet and then a swarm of bats (two of them) pushed a huge mob into my face…dead.

I’ve seen the bat swarms (and others) plenty of times. Usually not a big deal and sometimes really great (if you have garlic). Pushing mobs is devious though. Even then, usually not a problem but this time they bulldozed a wall of monsters right on top of me…twice (no avoiding it). One of those frustrating but fun (sorta considering I died) moments in the game.

The later swarms of ghosts (or whatever you call them) pushing werewolves still gets me almost every time. They just don’t stop and there are so many.

In my opinion, this game is ridiculously underpriced.

Absolutely correct. I’ve been playing it off and on for a while and the entertainment:price ratio is ludicrous.

My first thought as well.

Some tips, spoilered for people who like figuring stuff out on their own.

For new players: always take garlic. It doesn’t scale well and you’ll eventually stop prioritizing it in most runs, but it will absolutely keep you alive in the early game.

When deciding on new items, pay attention to the tooltip that says (I think) EVO, which is short for evolution. If you have the weapon at level 8 and at least one level in its appropriate support item, you will always earn the evolved version of the weapon when you open a chest. They’re significant power spikes. You won’t have access to all evolutions early on since you have to unlock certain items, but you can look at the achievements to see which ones you’ve gotten and which ones you still need.

All permanent upgrades get more expensive as you make purchases, so it’s possible to be extremely inefficient. Don’t be afraid to hit the refund button and redo your upgrades as often as you need to, and always start with the more expensive ones that you want, like duplicate.

When deciding on new items, pay attention to the tooltip that says (I think) EVO, which is short for evolution. If you have the weapon at level 8 and at least one level in its appropriate support item, you will always earn the evolved version of the weapon when you open a chest.

Just a note about that:

You won’t see the “EVO” notice until after you’ve evolved that weapon once.

Huh, I didn’t know that. That change must’ve come in after I’d cleared all the baseline stuff and I didn’t notice as new content rolled out.

I just made 30 minutes for the first time on Mad Forest with Gennero(sp?).

Was a very close run thing. I was surrounded by a jillion pimped-up bats (the ones that drop loot boxes and do not die easily at all). I literally just put myself in the center of the closing circle and hoped the timer would reach 30 minutes before the bats did. I just made it (happy to take it though).

My strategy: Around 15-17 minutes or so the map just becomes impossibly crowded. I simply stopped trying to do anything (like collect gems or chests or kill special entities that drop chests) and focused solely on running around and getting out of tight spots. I was lucky to get evolved knives. While knives are kinda meh in the early game the evolved knives drilled holes through anything in front of me and allowed escape routes when otherwise I would have surely died. I also got lucky in a part where I was surrounded by mummies and maneating flowers which move real slow allowing more time to wail on them. The faster moving stuff is harder to deal with.
I also buffed my speed with the powerups before starting. It definitely helps being able to move a bit faster.

Definitely worth the $3, but also some issues (what do you expect?)

Played probably 7-8 times and really struggled getting past 12-13 minutes, but on the next run found multiple 5x chests and maxed out all my gear by minute 18. I basically AFK’d for 11 minutes and only really had to do anything the last 30s-1m. lvl 8 whip, wand, bible, cross, knife and maxed spinach and tome. Only was able to evolve the wand though. I’ll have to see if you’re only allowed 1 evolve per run or if I didn’t have the correct support gear for the other weapons.

So my runs have all been incredibly hard or trivial. Game could use some balancing.

I’ll have to see if you’re only allowed 1 evolve per run or if I didn’t have the correct support gear for the other weapons.

You can evolve anything that you have the matching equipment. Here’s an evolution chart, but I do recommend trying to just find as many as you can:

So my runs have all been incredibly hard or trivial. Game could use some balancing.

Have you unlocked any of the other levels? The first two are pretty easy but it ramps up in difficulty. Also, there’s a power-up you can unlock to make the enemies harder.

But, as you play you get coins to spend on power-ups that work on any character for any game. Those can start to get you past 12-13 minutes.

I found a penta-chest (5x) on my second play through and several triple-chests (3x) early on. Made me think they are kinda common. They are not. Great when you get them but you certainly cannot rely on them. By far most are only 1x chests. That said, chests are worth getting any time you can.

It is possible to literally never move in the game and make it through 30 minutes. But you will need to be pretty advanced to start and pretty lucky as you play.

As with many rogue-like games they tend to be boom or bust in a given match. Annoys me too.

Does anyone know if bonuses are retroactive? I have watched some videos that suggest you need to take some bonuses in a certain order or else the bonuses do not apply to your advanced weapon.

Given this is an Early Access game and patches come out frequently it may be that stuff was fixed.

If it’s super simple, I wonder how well it’ll work on my tablet using Steam Link? I’ve played a few Steam games very successfully on my tablet, like A Baba Is You.

For less than $3 (still on sale) I’ll experiment.

I’d be surprised if it didn’t work but hard to know with this stuff. Let us know how it goes (I am curious if that will work).