Vending machine thefts on the rise

Is it so wrong that this story gave me a chuckle - just picturing rings of vending machine thieves prying these things open and waddling away, their pants weighed down with pounds of jingling, jangling coins.
OK, it’s not funny that this is happening, and they’re probably not stuffing all that money into their pants, but the mental image makes me laugh.

Anyway here is the story from the WSJ: 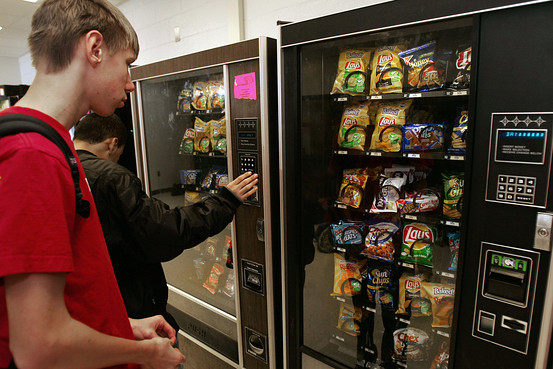 Tough times have triggered a wave of vending-machine thefts, prompting operators to fight back with sales-tracking devices and automated text-message alerts.

Theft rings have sprung up in Georgia, South Carolina, Florida, Mississippi and New York, among other states. More schools, hospitals and other big vending customers are complaining of such break-ins, especially with outdoor vending machines, according to loss consultants and machine operators.

While no one closely tracks the exact number of such thefts, these experts report a proliferation of websites and YouTube videos with instructions on how to break into the machines.

“My sense is that theft is on the rise as there are so many people in desperate times,” said Mark Manney, chief executive of Loss Prevention Results Inc., a Wake Forest, N.C., vending-theft consultant.

The industry already is struggling. U.S. sales fell 10% in 2009 to $19.85 billion, the latest data available, from $22.05 billion the year before, according to Automatic Merchandiser, a trade magazine. With profit margins as thin as 1%, losses from theft have an impact.

Reminds me of the story of the man who was arrested and charged with vending machine theft. He appeared in court to plead not guilty, and paid his bail in quarters.

We had a soda machine here at work. The stupid thing was getting cracked into every few weeks. The last person got caught (before we added an anti-break in device). The guy was using the money to buy some crack…to celibate a year of sobriety.

My college was a pretty private, yuppie liberal arts kinda place where only people with money sent there kids (or, like me, you took out a metric buttload of loans.) Everyone was well off but that didn’t stop the cool hipster kids from stealing from the machines. They were Pepsi machines that were filled with waters, juices, Sobe, Gaterade, Starbucks cold drinks, etc. and were all viewable since the front was transparent plastic. The bottom row was always empty as the kids would jam their arms through the retrieval slot to steal anything from the bottom row. You could tell which kids did it, as they had horrible looking purple bruises on their upper arms. I don’t know if the vendors caught on, though.

There used to be a vending machine in my dorm that would give out too much change sometimes. I’d play that thing like it was a slot machine. I really miss that machine.