Was Caesar Fat or Thin?

Somehow, this question somehow came up between two friends. Every description and portrayal of Caeser shows him as a fat glutten. However, my friend claims as a military man, he was thin. So, did the porky image come later - and stick? - Jinx

Somehow, that post was somehow redundant without being repetitive at all! Great Caeser’s ghost!

Every bust and coin I’ve seen, like these, tend to show him as a lean man: 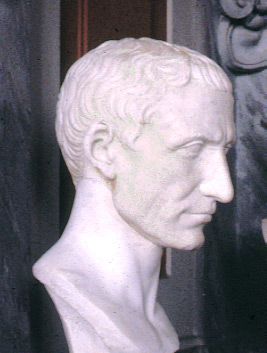 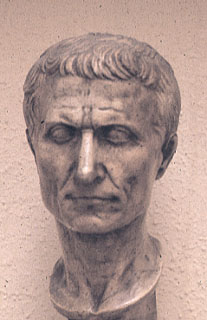 I found this description poking around, which I assume derives in at least part from Suetonius ( I know Suetonius mentioned the balding thing ). Unfortunately my own copy of The Twelve Caesars is packed away, so I can’t immediately confirm the details:

*He was small by our standards, only about 5’7". He was slightly built but kept in shape. He had dark brown eyes and soft and white skin. His face was nearly full and he kept it clean-shaven throughout his life. He was balding prematurely and was sensitive when people commented about it. *

My vote goes for: thin.

He was an excellent general, and noted as a womanizer.

I think this speaks for “thin”.

I’ve only seen depictions of Julius Caesar as a slender man (as in jovan’s links).

Where have you seen him depicted as a fat glutton?

I wonder if you’re thinking of later emperors who adopted “Caesar” as a title, even though they were not descended from the Julio-Claudian lineage. “Caesar” became the conventional title for the emperor’s heir apparent. Later, during the Tetrarchy, “Caesar” was the title given to the co-regents of the Western and Eastern halves of the Empire–Constantine, for instance, was recognized as the Caesar during Maxentius’s reign.

Although Constantine wasn’t a fat glutton either.

Also, here’s a reproduction of a bust of Caesar. He didn’t have a fat face.

You might be thinking of Nero, who did (and who was, by all accounts, pretty hefty):

Not at all. Very much the opposite.

You may be thinking of Charles Laughton’s portrayal of a corpulent, decadent Nero in Cecil B. DeMiller’s The Sign of the Cross (1932).

Being fat is not a luxary that an active Roman general could have afforded. Sure, they had their armchair generals back then who pointed at the enemy and said “attack” while resting comfortably in their tents. But Caesar was not one of those.

In addition to leading a soldier’s life, Caesar was well known for traits that do not seem compatible with an overweight man. He travelled at speeds that left his friends and enemies dizzy. He could work like a maniac and devote seemingly endless reserves of energy to a project. And he was a womanizer of unparalleled reputation. Possible for a big guy, but not likely.

Plus the fact that portraits at the time tended to be more realistic than idealized. So if his portraits all look the same and all show him as thin, then he was thin.

Suetonius AFAIK came closest to having a factual answer to the OP. The important thing to keep in mind is that he is writing in circa 110CE, +150yrs after the fact. He starts so many lines with They Say that which is better than stating as fact things not in evidence – it is still a bit of a thin reed for the SDMB. Tamerlane does a good job summing up what he said.

---------------QUOTE-----------------
He was somewhat overnice in the care of his person, being not only carefully trimmed and shaved, but even having superfluous hair plucked out, as some have charged; while his baldness was a disfigurement which troubled him greatly, since he found that it was often the subject of the gibes of his detractors. Because of it he used to comb forward his scanty locks from the crown of his head, and of all the honors voted him by the senate and people there was none which he received or made use of more gladly than the privilege of wearing a laurel wreath at all times. They say, too, that he was remarkable in his dress; that he wore a senator’s tunic [Latus clavus, the broad purple stripe, is also applied to a tunic with the broad stripe. All senators had the right to wear this; the peculiarity in Caesar’s case consisted in the long fringed sleeve.] with fringed sleeves reaching to the wrist, and always had a girdle [While a girdle was commonly worn with the ordinary tunic, it was not usual to wear one with the latus clavus.] over it, though rather a loose one; and this, they say, was the occasion of Sulla’s mot, when he often warned the nobles to keep an eye on the ill-girt boy.
--------------END QUOTE----------

As for Glutteny – I DK. Certainly he was no drinker, at least as far as Romans went and the only thing I see on food:

------------------------QUOTE-----------------------------------
LIII. That he drank very little wine not even his enemies denied. There is a saying of Marcus Cato that Caesar was the only man who undertook to overthrow the state when sober. Even in the matter of food Gaius Oppius tells us that he was so indifferent, that once when his host served stale oil instead of fresh, and the other guests would have none of it, Caesar partook even more plentifully than usual, not to seem to charge his host with carelessness or lack of manners.

FWIW, he liked to have men about him who were fat. Shakespeare.

I understand he wasn’t very heavy, but that fellow citizens would have still rather seen him with his clothes on. Hence, the general preference for Low-Fat Caesar Dressing.

Wow, the original comb-over, eh? Never knew there was such a distinguished model.

Wasn’t he also known as a, uh, manizer as well as womanizer?
(Great Ceasar’s ghost! Bald, bi-, been to Athens: It’s Michael Stipe!)

remember thou art mortal
NEVER seen him depicted as a fat glutton??? Oh, so you havent seen History of the World Part I.