What action figures would you buy if a good one was made?

Inspired in part by this thread, there are several I’d love to have had over the years. The first ones I can remember wanting were Gilligan’s Island, but save for a strange resemblance between Johnny West and the Professor they never made them, and I moved on. A few years later I wanted fully jointed LITTLE HOUSE ON THE PRAIRIE action figures, but from the books as opposed to the TV show.

Action figures that I’ve wished were available since I was an adult:

BARNUM’S SIDESHOW figures (mentioned in the other thread)- you’d have to have Seth MacFarlane or someone equally good make them, but I’d LOVE to have a set of Barnum’s “special people”. They’d have to be as exact as possible and perfectly scaled, but imagine your very own Chang & Eng jointed figures posed between Tom & Lavinia Thumb and Anna Swan & Captain Martin Bates [pic, preferably with a museum display set. Even the movie Freaks could be cool, though I’d prefer the Victorian originals.

King Tut- my ideal action figure would be similar to a nesting doll. His partly decayed leather corpse, which comes in an “as it would have appeared when his mummification was new” figure that it can fit inside of, then the wrappings, then the mask/sarcophagos/coffin/etc…

Henry VIII & family- but fully poseable, dressable and with modern ware accessories just as a matter of curiosity ("let’s see Anne of Cleves in Goth).

John Wilkes Booth and the conspirators plus the Lincolns, etc., and not just because I got recommended for counselling in sixth grade for reenacting the conspirators hangings using Best of the West figures.

Err… above should read “TODD McFarlane” (although Seth’s take might be equally interesting).

Well, I just recently bought these action figures, after researching the line and confirming that yes, the joints don’t slip, and yes, the actual figures are painted true-to-color of the marketing images. They’ve also got mixed plastic-and-metal construction so they’re weighted to balance properly! :eek:

But, I’m a huge Gundam fan, who doesn’t have the patience to assemble models. Although I do have these two!

Hobby Link Japan is a great site for this stuff; they sell models of all different sorts of stuff, not just mecha and anime/manga characters. In general, any toy line that’s also made-and-marketed in Japan has superior stuff over there (like Transformers, though I gather Hasbro’s stopped making their own and are just bringing those over now).

Sorry, I assumed you meant stuff that actually has toys made of it, but which are unsatisfactory. I was showing off these new ones I bought myself because they’re just about everything I’ve wanted to see in action figures since I was a wee little kid and read about the die-cast metal Optimus Prime that was super expensive, and a limited-edition item, to boot (meaning I’d never get one).

Hmm, what would I like toys of? HCM Pro style (like the Gundam stuff I linked to) Escaflowne, Alseides (blue and red), & Scheherazade from Escaflowne.

Toys of Link (as he appeared in art for the NES and SNES games, as well as the old American cartoon show; brown hair, brown pants and long-sleeve shirt under the green tunic, not a pretty boy, no earrings), Gannondorf (as seen in Ocarina of Time and Super Smash Brothers: Melee), Samus Aran (Super Metroid/Prime style; with power suit you can assemble around her), and Ridley (Super Metroid style red bastard). Might as well add Sonic, Knuckles, Metal Sonic (Sonic-CD version), Tails, Amy, and Robotnik (as seen ever since Sonic Adventure). Oh! and Alucard (as seen in Castlevania: Symphony of the Night)

That’s it for me! :rolleyes:

I would kill for action figures of the Firefly cast.

Action Figures have always seemed very flimsy to me. Either they are too poseable and loose-limbed, or not poseable enough and very stiff. Plus, at that scale, likenesses are hit and miss, even with the scanning technology they now use.

So I prefer statuettes and maquettes, which are not poseable at all for the most part (maybe a turnable head or replaceable accessory).

So in that case, I’d like to see (You can probably detect a theme):

The rest of the cast of Pixar’s Cars in 1:24 scale.
Vermithrax the dragon from Dragonslayer.
Falkor the LuckDragon from the original NeverEnding Story movie.
The Gorax from the Ewok Adventure: Caravan of Courage.
A Terror-Dog from Ghostbusters.

Robin Curtis as Saavik, just to go with my Kirstie Alley Saavik (and Ro and Barclay) to complete my mini-collection of Star Trek characters I actually like.

Psst… Hey, GuanoLad! Check out those HCM Pro figures I linked to in post #3! There about 5 inches tall, and they range from $12-$25 a piece. Look at the detail! And note my points about the construction, engineering, and painting of them. What you want out of figures is possible, it’s just that companies have this bad idea that there isn’t a market for it. :mad:

John Wilkes Booth and the conspirators plus the Lincolns, etc., and not just because I got recommended for counselling in sixth grade for reenacting the conspirators hangings using Best of the West figures.

They made Best of the West figures? The one-season parody Western sitcom (which Dad & I loved) spawned action figures?

To answer the OP, the Universal Monsters action figures (which SHOULD be but are not still being produced) should have put out a Bela Lugosi Dracula which was available for a decent length of time, and also a Dwight Frye Renfield. (I’m not counting the dressable 12 in figures- I’m talking the action figures!)

And a Wicker Man playset with all the characters Do not actually place Sgt Howie figure in Wicker Man before burning. Replacement Wicker Men sold
seperately.

I would kill for action figures of the Firefly cast.

I wouldn’t kill for them, but I would like to buy them. But only if they, you know, actually LOOK like the characters and aren’t just generic faces in similar costumes.

Ok, I would kill for a lifesize animatronic Inara. Shhh…

There was a Big ass Sentinel from the Matrix I spotted a while back, but I cant find it anywhere now… That would be INSTANTLY purchased. IIRC, there were a few Serenity action figures… Mal, Jayne and a couple differnt Reavers, not the whole crew.

There was a Big ass Sentinel from the Matrix I spotted a while back, but I cant find it anywhere now… That would be INSTANTLY purchased. IIRC, there were a few Serenity action figures… Mal, Jayne and a couple differnt Reavers, not the whole crew.

Actually, IIRC, two Mals (with and without brown coat), two Jaynes (different t-shirts and weapons, one with cigar) and one reaver.

Can’t believe I’m the first to ask for that.

Someone must have done a stretchable-bendable Plastic Man.

Can’t believe I’m the first to ask for that.

Someone must have done a stretchable-bendable Plastic Man. 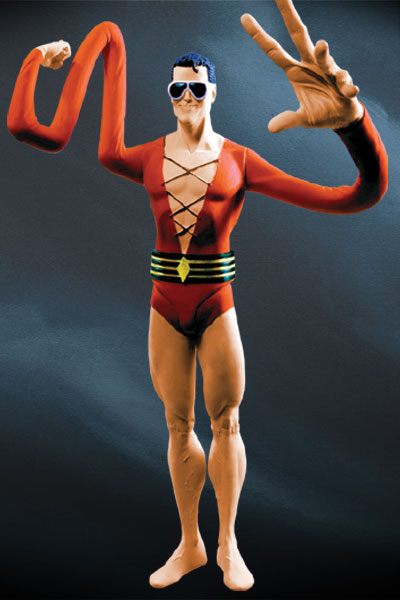 Anyway, I’m a big action figure collector, but I would definitely buy:

Movie-accurate Ghostbusters that actually look like Bill Murray (Peter Venkman), Dan Aykroyd (Ray Stantz), Harold Ramis (Egon Spengler), and Ernie Hudson (Winston Zeddmore). NECA, the company with the license to make toys, has only been able to make a few monsters because Bill Murray is a jerk about his likeness rights.

Tyler Durden and the Narrator from Fight Club (even though it would go against the very point of the book and movie).

From comics:
The Rocketeer with removable helmet (in 6" scale, since I know some high-end 12" Japanese figures have been made)
Grifter and Jack “Spartan” Marlowe from Wildcats (again, new sculpts from DC Direct, since I have the old '90s Wildcats figures and they didn’t age well)
Fire, Ice, and improved versions of Starman and the Shade from DC Direct
An improved Hunter Rose Grendel in Toy Biz’s upcoming Legendary Comic Book Heroes line

The Monica Lewinsky action figure where she is on her knees. The one that matches up so well with the Bill Clinton action figure.