We didn’t have Hardee’s in California. It’s called Carl’s Jr there.

But no, this was a sit-down restaurant.

The closest I can find is that a restaurant in Saint Petersburg, Florida has a food item called a British burger:

Check out the menu for Munch's Restaurant.The menu includes and main menu. Also see photos and tips from visitors.

We didn’t have Hardee’s in California. It’s called Carl’s Jr there.

There’s also one at HB Jones in Elmhurst, IL.

I’m still trying to figure out how you can arrange two pieces of bacon into something resembling the Union Jack. Wouldn’t you need four?

In the 70s, the epitome of “British burgers” was Wimpy, which isn’t something I would recommend to anybody.

I forget: What was the sit-down “family restaurant” Elizabeth Moss was flogging in Mad Men?

Did they have something on the menu called “The British Burger”?

Quite possibly, back then. Memory is fleeting and the old menus aren’t online.

I’m still trying to figure out how you can arrange two pieces of bacon into something resembling the Union Jack. Wouldn’t you need four?

I presume they wanted to make a bacon-cheeseburger and someone thought the crossed bacon resembled the flag.

I forget: What was the sit-down “family restaurant” Elizabeth Moss was flogging in Mad Men ?

All I remember is that they were at one time very popular. Country Kitchen, maybe?

This menu is from before I remember, but it’s definitely on there.

Was it Howard Johnsons? They figured into a few episodes.

Huh. Works for me. Here’s the page it’s on. (Note: They also have a chili size.)

Link didn’t work for me, either.

The coffee shop in the Petroleum Building near DTLA had a Canadian burger which was essentially a cheeseburger with a slice of Canadian bacon, and it was so good. It was also appropriate because the owners were French Canadian.

Nope, not HoJo’s. I’d remember that because I ate there a lot when I was with my dad.

It was Burger Chef. Here’s the clip: 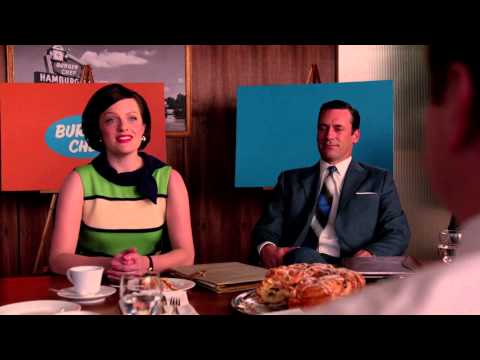 I’m still trying to figure out how you can arrange two pieces of bacon into something resembling the Union Jack.

Lots of people use ‘England’ when they mean Great Britain and the English flag is easily made with two rashers. That might be good across the white background of an English muffin, served with some strong mustard and mushy peas. The flag of England is derived from Saint George's Cross (heraldic blazon: Argent, a cross gules). The association of the red cross as an emblem of England can be traced back to the Late Middle Ages, and it was increasingly used alongside the Royal Banner in the wake of the English Reformation, especially as a maritime flag referred to as a white ensign. It was used as a component in the design of the Union Jack in 1606. It has been widely used since the 1990s, specifically at national sp...