What do all these people actually do at the JPL?

I was watching this video, filmed at the Jet Propulsion Laboratory, about the successful Mars landing, and I remembered something I always wondered about in the past about these “control rooms”: what do all the people sitting in this room in rows actually do? Why has the design essentially not changed from the early days of space flight? Do they sit there every day like this, or are they the engineers involved in the project who come together just for the touchdown? 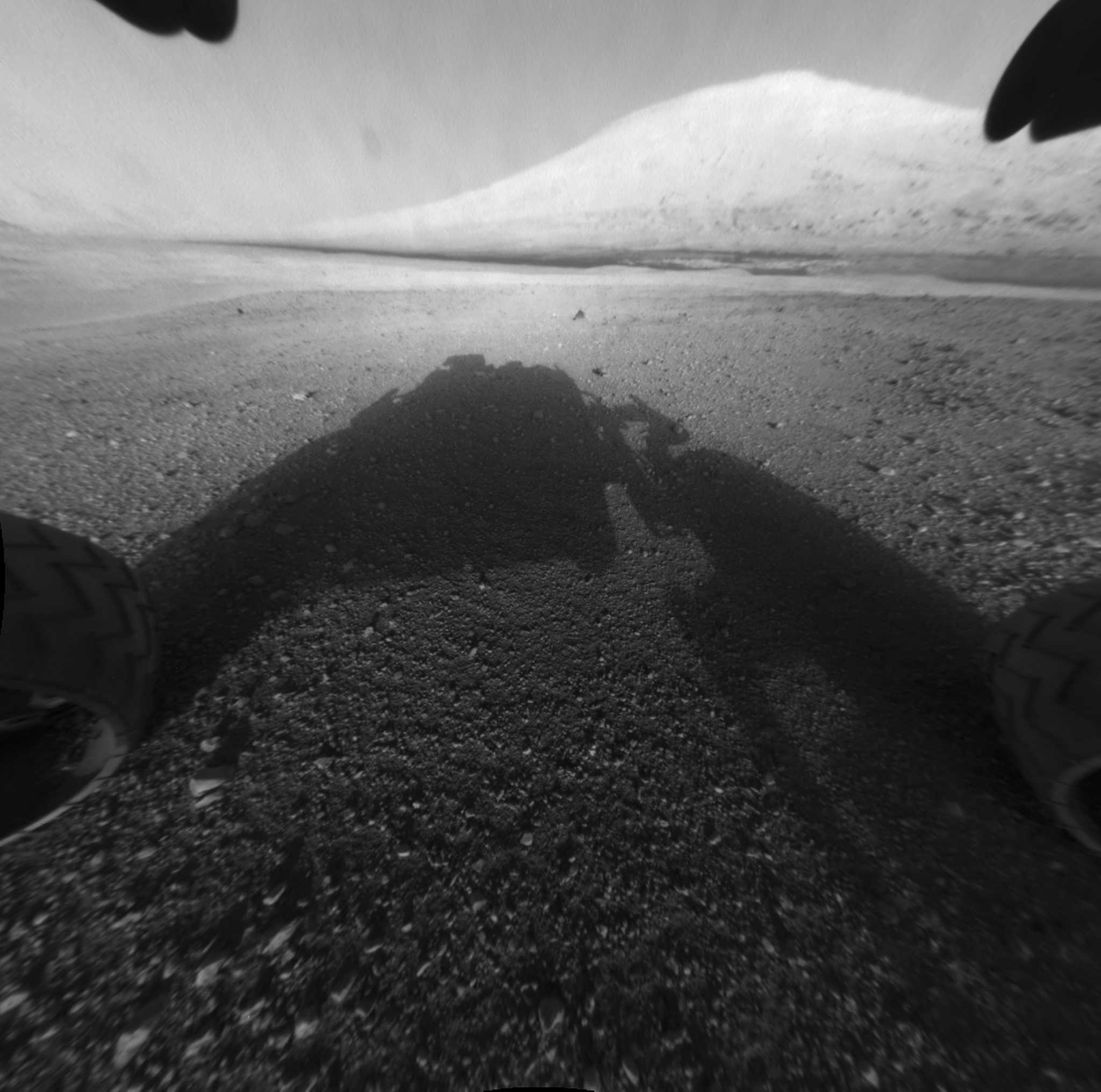 NASA celebrated the precision landing of a rover on Mars and marveled over the mission's first photographs Monday.

At any given time there will generally be someone in the control room, but usually only one or two at a time, in shifts. You only get that many people crowded in at once for big events like landings.

And for many missions, the “control room” can be any room with a computer in it that’s on the Internet, and may move around the country when different people go on shift. You could have a guy in the fancy official control room in Pasadena handing off control to a guy at some university in Kansas, sitting in an office set aside for that purpose.

There’s likely to be a teleconference every day or every week (depending on the pace of the mission in question) where a bunch of the top people on the project decide what their general goals are going to be for that day or week, but then it’s usually one guy who sits down and implements that general plan. And then, if something really unexpected happens, that guy might change the plan, or call up the others to come up with a new plan.

I’m not familiar with civil space exploration missions, but for a typical government satellite you’d need to have a few people to monitor the health of the satellite, monitor the performance of the payloads and make sure the mission is getting done, schedule things like the availability of relay satellites to make sure messages get passed back and forth between the ground and satellites, maybe someone to monitor space weather and receive warning calls if satellites start getting too close, and so on. I would think for research missions there would be more people to plan out things, like where to go next, what tests to run, make sure the data is being received, and the like.

Her’s a cool picture from what appears to be the Apollo program. 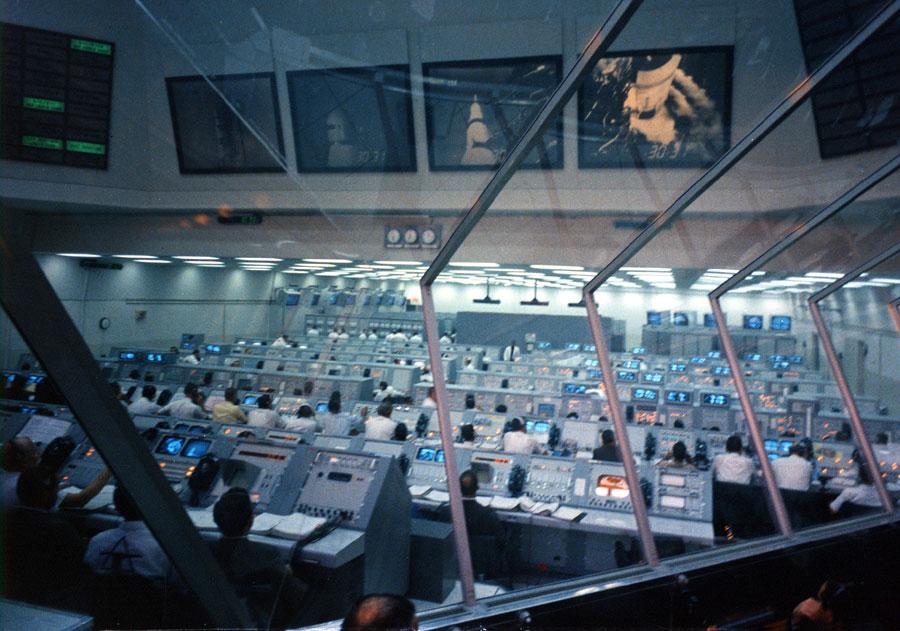 I suppose every one of those people is monitoring some individual subsystem.

Here’s a Wikipedia article with some cool pictures of the ISS mission control centers in Russia and the US.

A mission control center (MCC) is an entity that manages aerospace vehicle flights, usually from the point of lift-off until the landing or the end of the mission. A staff of flight controllers and other support personnel monitor all aspects of the mission using telemetry, and send commands to the vehicle using ground stations. Personnel supporting the mission from an MCC can include representatives of the attitude control system, power, propulsion, thermal, attitude dynamics, orbital operations and other subsystem disciplines. The training for these missions usually falls under the responsibility of the flight controllers, typically including extensive rehearsals in the MCC.

During the actual landing sequence on Mars, not much except watch and wait and hope. There’s a 14 minute speed of light delay to Mars, so if anything went wrong, it’s not like they could do anything useful in a meaningful time frame.

At other times, they monitor systems, run tests, probably input course corrections and decipher data the vehicle is sending back.

Her’s a cool picture from what appears to be the Apollo program.

I suppose every one of those people is monitoring some individual subsystem.

That looks like the launch control blockhouse at Cape Canaveral. They were in charge of the mission until the rocket cleared the tower, at which point operational responsibility switched to Mission Control in Houston. I had no idea it was so big, though.

I didn’t see a description of the controller responsibilities for Curiosity. Flight controller positions for the Apollo era (used here because it’s well covered, and I’m familiar with it) included:

EECOM – in charge of electrical systems and overall health of the spacecraft
INCO – responsible for telemetry and communications systems
FIDO – reponsible for maintenance of proper course (and course correction)
GNC – monitored health of guidance and navigation equipment, as contrasted with
GUIDO – interpreted data from the guidance and navigation systems to determine the spacecraft’s location
SURGEON – doctor monitoring astronaut health
FLIGHT – the guy in charge on the ground
CAPCOM – the only controller who talked with the astronauts

The way it worked in manned missions is that each controller has his area of responsibility. If he determined something needed to happen – a course correction, maintenance on the guidance computer, crew needs to take a seconol, whatever – he told the flight director (FLIGHT). FLIGHT then decided what actions were necessary, in what order, and instructed the CAPCOM to relay the information to the crew.

Obviously in an unmanned mission the positions are different (I’m sure some are similar), but the idea is the same – each controller is responsible for his or her particular sub-section of things that can go wrong, and when those systems require attention, she reports to the flight director. He determines what actions to take and when, and then instructs someone to carry them out. I don’t know if they have a single person implementing instructions to the robot like the CAPCOM did to the astros – I bet they do, so things don’t get confused.

Most members of the flight control team are probably engineers by training. Some might be scientists responsible for the mission plan, although those guys wouldn’t have much to do during landing, I expect.

Most of them are probably doing math.

Well, that man is playing Galaga…

At other times, they monitor systems, run tests, probably input course corrections and decipher data the vehicle is sending back.

And don’t forget, they’re also giving the rover orders about where to drive to, where to drill, which rocks to zap, etc.

(Plus a few total dipsticks.)

I always thought it would be cool to work at NASA, and I can do that. I wonder if they’re hiring…

Well, that man is playing Galaga…

I have an image of a room full of people; some button-down military types, some geeks, and one guy from LongIsland with gelled hair, orange skin, and freshly waxed eyebrows: “Dude… I mean, flight control, nav is five by five, yo.”