What movie is this?

What film am I thinking of? A middle-aged (possibly overweight) guy from somewhere overseas comes to the U.S. and ends up on a farm somewhere in the midwest and falls in love with the proprietress?

The guy doesn’t speak English, and, I thought, played the accordion!!! I thought the film was Schultze Gets The Blues, but I watched it last night, and that’s not it…

Thanks in advance to all Dopers…

I remember a movie about a butler who moves to the States (out west) and opens a restaurant with a local woman; I’ll see if I can find that one.

I remember a movie about a butler who moves to the States (out west) and opens a restaurant with a local woman; I’ll see if I can find that one.

It’s a relatively recent film (within the last 20 years?), I should have mentioned that.

It was Werner Herzog: Stroszek is a 1977 German tragicomedy film directed by Werner Herzog and starring Bruno S., Eva Mattes, and Clemens Scheitz. Written specifically for Bruno S., the film was shot in Plainfield, Wisconsin, and North Carolina. Most of the lead roles are played by non-actors. Bruno Stroszek (Bruno S.) is a Berlin street performer. Released from prison and warned to stop drinking, he immediately goes to a familiar bar where he meets Eva (Eva Mattes), a sex worker down on her luck, and lets her stay w...

Accordion was the key word.

It was Werner Herzog:

Accordion was the key word.

Thanks, but I still don’t think that’s the one. In the film I’m thinking of, I think the protagonist lives in a motel and takes up with the woman who runs the motel.

Thanks, but I still don’t think that’s the one. In the film I’m thinking of, I think the protagonist lives in a motel and takes up with the woman who runs the motel.

How many movies like that, with an accordionist, are even allowed?

It’s not about a fat Germnan man, but an overweight gewrman woman who ends up at a motel, but there are some similarities in the Bagdad Café from 1987: Bagdad Cafe (sometimes Bagdad Café, titled Out of Rosenheim in Germany) is a 1987 English-language West German film directed by Percy Adlon. It is a comedy-drama set in a remote truck stop and motel in the Mojave Desert in the U.S. state of California. Loosely based on Carson McCullers' novella The Ballad of the Sad Café (1951),[citation needed] the film centers on two women who have recently separated from their husbands, and the blossoming friendship that ensues. It runs 95 minutes in the U. Ge... 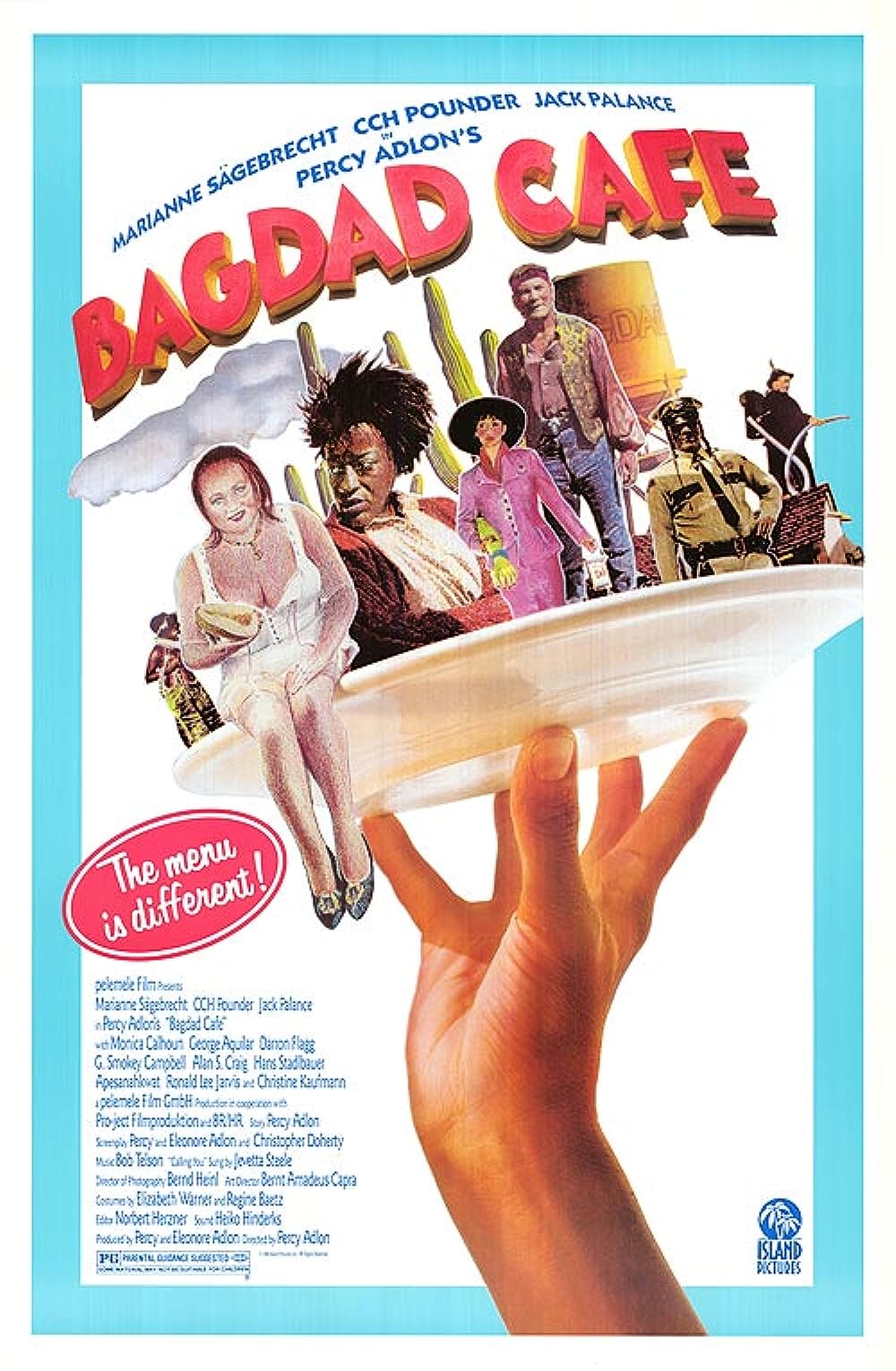 Bagdad Cafe: Directed by Percy Adlon. With Marianne Sägebrecht, CCH Pounder, Jack Palance, Christine Kaufmann. A lonely German woman ends up in the most desolate motel on Earth and decides to make it brighter. 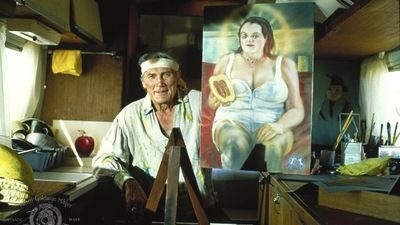 The heavyset German lady, her body and soul tightly corseted, her hair sprayed into rocklike permanence, is having a fight with her husband, right there in the Mojave Desert. They are in the middle of some kind of miserable vacation, touring America...

The heavyset German lady, her body and soul tightly corseted, her hair sprayed into rocklike permanence, is having a fight with her husband, right there in the Mojave Desert. They are in the middle of some kind of miserable vacation, touring America as a version of hell.

She can take no more. She grabs her suitcase and stalks away from their Mercedes, he drives away into the red, dusty sky, and she walks to a miserable truck stop and asks for a room.

An opening like that makes you stop and think, doesn’t it, about how cut-and-dried most Hollywood movies are. There would seem to be no place in today’s entertainment industry for movies about fat German ladies and homesick truck stops, and yet “Bagdad Cafe” sets us free from the production line of Hollywood’s brain-damaged “high concepts” and walks its own strange and lovely path. There is poetic justice in the fact that this movie, shot in English in America by a German, is one of the biggest box office successes in recent European history.

The German woman is named Jasmin (Marianne Sagebrecht), and she is appalled by the conditions she finds at the Bagdad Cafe. It is simply not being run along clean and efficient German lines.

The proprietor is a free-thinking black woman named Brenda (CCH Pounder - yes, CCH Pounder), who shares the premises with her teenage children, a baby, a bewildered Italian cook, a tattoo artist and a shipwrecked former Hollywood set painter who is played by Jack Palance as if he had definitely painted his last set.

Jasmin sets to work. She gets a mop and a pail and begins to clean her room, while the motel regulars look on in amazement. Back and forth she goes, like some kind of natural force that has been set into implacable motion against dirt. Gradually her sphere extends to other rooms in the motel, and to the public areas, and she gives Brenda little lectures about cleanliness and the importance of maintaining high standards for the public.

Day by day, little by little, however, Jasmin herself is changed by this laid-back desert environment. Her too-tight hausfrau dresses give way to a blouse that billows outside her slacks. A stray wisp of hair escapes from the glistening spray, and then finally her hair comes tumbling down in windswept freedom. And she reveals that she can do magic tricks.

Yes, magic tricks. After she whips the cook into shape and the truck stop’s restaurant begins to do some business, she starts entertaining some of the customers with closeup illusions, which eventually grow in scale until the Bagdad Cafe is presenting its own cabaret night after night, with all the regulars pressed into the act.

All of this sounds rather too nice, I suppose, and so I should add that Percy Adlon, the director, maintains a certain bleak undercurrent of despair, of crying babies and unpaid bills and young people who have come to the ends of their ropes.

He is saying something in this movie about Europe and America, about the old and the new, about the edge of the desert as the edge of the American Dream. I am not sure exactly what it is, but that is comforting; if a director could assemble these strange characters and then know for sure what they were doing in the same movie together, he would be too confident to find the humor in their situation. The charm of “Bagdad Cafe” is that every character and every moment is unanticipated, obscurely motivated, of uncertain meaning and vibrating with life.

Thank you Cal, I do think that’s the one. It’s weird how I conflated Bagdad Cafe and Schultze into one film.

I should also note that I found Schultze to be a pretty boring film, though the premise is a good one.