Whatever Happened to Canned Hams?

You can order traditional Virginia hams. Plantation owners like George Washington had smokehouses filled with a couple of hundred hams to last through the winter.

Smithfield Country Ham for gourmets who enjoy adding their signature to this famous delicacy. Comes complete with cooking instructions and cooking bag.

As I recall, they’re fairly labor-intensive to prepare. You have to scrub mold off them and rehydrate the meat.

Looking at some of the Amazon links, I acknowledge that some of the product doesn’t indicate that refrigeration is required. But I remember absolutely and without error that the canned hams I grew up on were sold refrigerated, and had language requiring refrigeration. This, as opposed to Spam, Vienna Sausages, etc., that didn’t require refrigeration.

These were big hams, and you had to open the container with an included key.

How have we gotten so far in a thread about canned meats and not mentioned the wonderful meat-like product wonderful Spam?

And her ugly sister Treet.

I don’t remember canned ham ever being a thing, even back in the 80s when I was a kid. In fact the first time I saw one was in a Christmas movie (one with Tim Allen maybe?). I thought it looked odd, and assumed that it was a thing up north that never made it’s way down here to Texas. Here the hams are usually in the freezer section next to the turkeys. This is how they’ve always been sold as far back as I remember, with the wrapper being a different color depending on whether it’s glazed, smoked, spiral slice, etc.

I’m a fan of older restaurant menus and ham seems to have been much more popular decades ago. You’d see it in the dinner entrees next to the salmon and veal.

Maybe it’s the time that Stephen Colbert put a pair of glasses on one of the large hams and called it “Ham Rove” (after Karl Rove, GOP hatchet man, and it really did look like him) - after that, we all lost our innocence.

When he did that he also had the “Colbert Super PAC Fun Pack” and I ordered one. It came complete with a 1 LB canned ham, so you can make your own Ham Rove (glasses not included). I still have mine!

I suspect Ham Rove is now expired. But as of yet he hasn’t started leaking.

And now, let’s take a break and listen to “Canned Ham”, one of the few, maybe even the only, song about our topic du jour 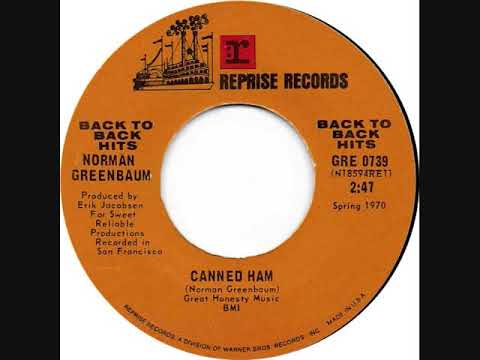 OK, if I didn’t already love this thread, a Norman Greenbaum song about canned ham (“When you gonna buy me a canned ham?” would’ve done it.

How have we gotten so far in a thread about canned meats and not mentioned the wonderful meat-like product wonderful Spam?

I didn’t include it in the OP because it’s so (improbably) popular today. I included canned corn beef because I happened to see some at the store recently. 5 minutes later, an older man stopped me to ask if I knew where the canned corn beef was. He was shopping for his ninety-something mother.

But I remember absolutely and without error that the canned hams I grew up on were sold refrigerated, and had language requiring refrigeration.

That is also my recollection. And I recall seeing canned hams in people’s refrigerators, not in cupboards. Has ham technology improved?

I don’t remember canned ham ever being a thing, even back in the 80s when I was a kid.

I think by the Eighties, it was already on its way out. I bought one in 1983. The day before Thanksgiving, my baby son, who’d been very ill, was released from the hospital. The store was out of turkeys and real hams, so I bought a canned one and some yams. Profound relief makes even a canned ham taste good.

I’m a fan of older restaurant menus and ham seems to have been much more popular decades ago.

I blame us Boomers. We grew up and got obnoxiously health conscious, and pork lost out to chicken and fish (even though lean pork was actually OK for you). I wonder how much fat was in canned ham back then.

When he did that he also had the “Colbert Super PAC Fun Pack” and I ordered one. It came complete with a 1 LB canned ham, so you can make your own Ham Rove (glasses not included). I still have mine!

The 1lb cans like DAK don’t need to be refrigerated, but the larger ones do. They’re usually in the cooler with the cold cuts, so may be why some of you don’t see it.

Yep, it used to require a key like Spam used to and Libby’s corned beef still does. Now there’s a pull handle on the top.

I don’t understand all the hate for it. It’s the same as packaged cold cuts and some deli ham. Glued together pieces of ham.

Hormel Black Label canned ham is available in the grocery store cold case near the sausages and bacon. We got one once and found it was just delicious! It was no honeybaked spiral ham, but it was very good, sliced for sandwiches and fried for breakfast. About $14 for 3 lbs.

I’ve purchased five hams in the last month. They were all bone-in. Two were spiral sliced, and one was a shank. I didn’t pay more than $1.05 per pound for any of them. I think 2 of the 5 were .99 a pound. If a canned ham is $4.50 a pound I think we’ve answered the OP. I’d rather be buying London broils.

Does it have something to do with David Letterman’s retirement?

See also Romantic Dinner in a Can.

I bought one of the 1-lb shelf-stable canned hams back in the 1980’s. It tasted almost only of fat. Never tried another one.

I don’t know, but apparently if you buy “hot dogs” in Europe, they can be packaged in brine within a glass jar.

As for the hams, I think there was some kind of advancement in vacuum-packaging sometime since the late 1970s-early 1980s, and that’s right at about the same time that we started seeing vacuum packed hams becoming more common, and canned hams starting to fade away.

I believe they’re still going, just having a break.

I’ve had canned whole chickens. Like canned ham, they’re not bad, but I wouldn’t want to eat them every day.

This. The chickens are pretty unappetizing to look at unless you are really, really hungry. I’ve also had canned bacon. Great for the family camping trip if the fish aren’t biting. And, of course, who can forget canned Vienna sausages?

Are these canned hams an actual piece of a ham that has been canned or a processed product?

I can’t say I’d go for canned ham these days, but growing up I ate plenty of “boiled ham” that came sliced from the deli counter. I’m imagining this is something similar.

They are canned so they ‘keep’ for a long time. Convenient if you’re snowed in or the electricity goes out.