What's the residual oxygen concentration in a jar candle, after a flame out?

Consider a typical jar candle with a nice flame. The lid is closed, and the flame goes out, because there is no oxygen to sustain combustion.

Where there's smoke, there's fire, right? Well, it's a little more complex than that. Learn the elements of fire and how they're connected.

Indeed fire suppression systems that rely on displacing the oxygen concentration in a volume (ie a room) generally target a concentration of 14% O2. This is sufficient to interrupt combustion yet allow human life

Indeed fire suppression systems that rely on displacing the oxygen concentration in a volume (ie a room) generally target a concentration of 14% O2. This is sufficient to interrupt combustion yet allow human life 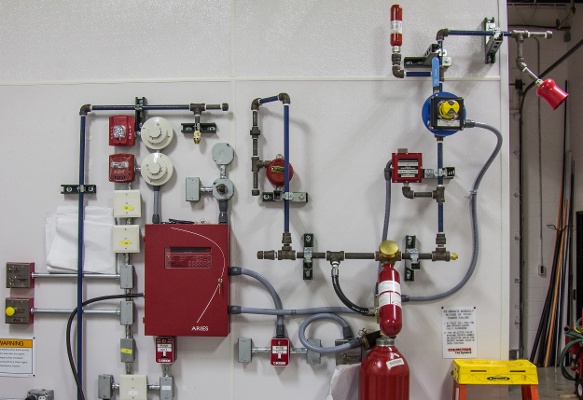 What is a CO2 Fire Suppression System and How Does It Work?

Carbon Dioxide as a Fire Suppressant: Examining the Risks | US EPA

Under the Clean Air Act Amendments of 1990, the U.S. Environmental Protection Agency (EPA) has the statutory authority to set phase-out dates for ozone-depleting substances (ODS) and to evaluate potential risks posed by proposed ODS substitutes.

At the minimum design concentration (34 percent) for its use as a total flooding fire suppressant, carbon dioxide is lethal.

I’d say, of all the related installations of systems, 95% or more are clean agent based with the remainder being C02 or fancy things like water misting.

Clean agent systems use a variety of products, such as FM200, Novec 1230, etc. Some more detail:

Why not nitrogen? Or nitrogen mixed with a small amount of either CO2 or a oderant, so people will get out?

And is it concentration of oxygen that matters, or partial pressure (for both flames and human survival)? A system that’s designed for sea-level total pressure might not work right in Denver.

Pure nitrogen is used often. seemingly more frequently in SE Asia than in the west, I’m unsure why.
Chemical Clean agents (FM200, novec) have some specific advantages over pure gaseous clean agents like nitrogen or nitrogen/argon blends. They provide a cooling effect on discharge for one and also require less physical infrastructure (compressed bottles and piping and associated valving).
There are correction factors required for installing at altitude but I’m unclear on the physics behind it

Why not nitrogen? Or nitrogen mixed with a small amount of either CO2 or a oderant, so people will get out?

And is it concentration of oxygen that matters, or partial pressure (for both flames and human survival)?

According to the EPA site I linked to:

Flame extinguishment by carbon dioxide is predominantly by a thermophysical mechanism in which reacting gases are prevented from achieving a temperature high enough to maintain the free radical population necessary for sustaining the flame chemistry. For inert gases presently used as fire suppression agents (argon, nitrogen, carbon dioxide, and mixtures of these), the extinguishing concentration (As measured by the cup burner method (NFPA 2001)) is observed to be linearly related to the heat capacity of the agent-air mixture (Senecal 1999).

Although of minor importance in accomplishing fire suppression, carbon dioxide also dilutes the concentration of the reacting species in the flame, thereby reducing collision frequency of the reacting molecular species and slowing the rate of heat release (Senecal 1999).

Short version: CO2 has a higher volumetric heat capacity than N2, making it better at interrupting the flame chemistry. The importance of the diluent’s heat capacity shows that O2 partial pressure is not the only factor in the performance of a diluent-based fire suppression system.

For inert diluent gases, human survival is a function of O2 partial pressure. But CO2 isn’t an inert asphyxiant, it’s acutely toxic. In small concentrations the effects take time, but at large concentrations, you can pass out pretty damn quick. Tests performed on mongrel dogs showed the physiological effect of carbon dioxide on the body of the animal: after inhalation of a 50% CO2 and 50% air mixture, respiratory movement increased for about 2 minutes, and then, it decreased for 30 to 90 minutes. Hill and Flack showed that CO2 concentrations up to 35% have an exciting effect upon both circulation and respiration, but those beyond 35% are depressant upon them.[citation needed] The blood pressure (BP) decreased transiently during the incr...

But in concentrations much lower than the toxic levels, carbon dioxide also has the effect of making humans feel short of breath. That’s why nitrogen leaks are dangerous, because they can displace too much oxygen, but without ever triggering that short-of-breath feeling, so people stay in the area until they pass out. That’s why I was suggesting mixing in a small amount of carbon dioxide (i.e., just enough that in operation of the system, humans in the area would feel short of breath, but not so much that they’d be poisoned).

Mixing suppressant gases adds cost without significant benefit. Areas that use CO2/N2 fire suppression systems have an ear-piercing alarm and strobes that operate for something like 30 seconds before dispensing. And when it dispenses, it’s a violent event that you definitely won’t fail to notice (see first video at 0:45, second video at 1:35): 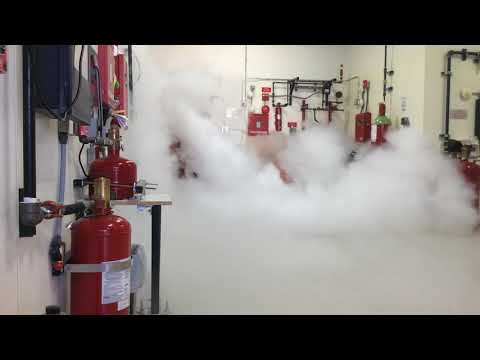 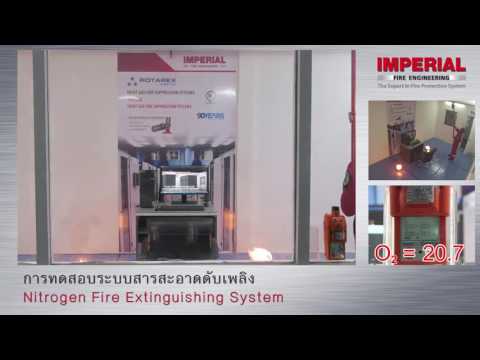 That’s why I was suggesting mixing in a small amount of carbon dioxide (i.e., just enough that in operation of the system, humans in the area would feel short of breath, but not so much that they’d be poisoned).

I like the idea Chronos. I am not sure though, that you will be able to establish a statistically valid safe (and defensible) CO2 concentration in N2. And OSHA and other regulatory agencies will not get behind it unless you have data. And data will require experiments on humans.

We use Oxygen monitors that alarm on low O2 concentrations and it works fairly well.

These systems were set to produce a 5%-7% Halon in the computer room, while humans don’t lose consciousness until 10%+. Even so, there were loud alarms & strobes going off, and the switch to trigger the Halon system was usually right beside the exit door, to be hit as you exited the room.

I believe new Halon systems are very restricted now, because it is an ozone-depleting gas – an environmental problem.

I believe new Halon systems are very restricted now, because it is an ozone-depleting gas – an environmental problem.

I don’t know about restrictions, but yes they can be pretty bad for the environment. FM200 has a GWP of 3220. There is an alternative called Novec that has a GWP of 1, no different from CO2.

FM200 and Novec are both pretty expensive, though. For a typical engine test cell ( 25’ x 25’), refilling the tanks costs about $60,000. OTOH, they’re much better than CO2 at not killing room occupants.

Heptafluoropropane (HFC-227ea) contributes to climate change. It has a global warming potential (GWP) of 3,220 over 100 years. Due to its high GWP, the HFC-227ea has been included in the list of controlled substances of the Montreal Protocol (2016 Kigali amendment, in effect in January 2019). Under EU regulations, production, imports and sales of HFC-227ea in spray cans such as freeze sprays or dusters have been prohibited since 2014, as the GWP is over the limit of 150 for these applications.

Novec 649/1230 does not deplete ozone (ODP 0) and has a global warming potential of 1 (over 100 years), equivalent to that of carbon dioxide. The Globally Harmonized System of Classification and Labeling of Chemicals (GHS) classifies this chemical as H412 - Harmful to aquatic life with long lasting effects. Photolysis in sunlight, hydrolysis and hydration may be a significant sink of Novec 649/1230 in the environment. It has very short estimated atmospheric lifetime of around five days.[