I don’t think there was a lot of realignment in state house control in 2020,

But I don’t think there were a lot of statehouses picked up in 2020. And in 2018, democrats only picked up 6 state houses. Considering that there are 99 statehouses, those are low numbers.

The graph below has what state legislatures (both house and senate) were under one party control or split between the two parties. Tons of gains for the democrats under Bush, tons of gains for the GOP under Trump. But the changes seem to have been minor in 2018 and 2020. 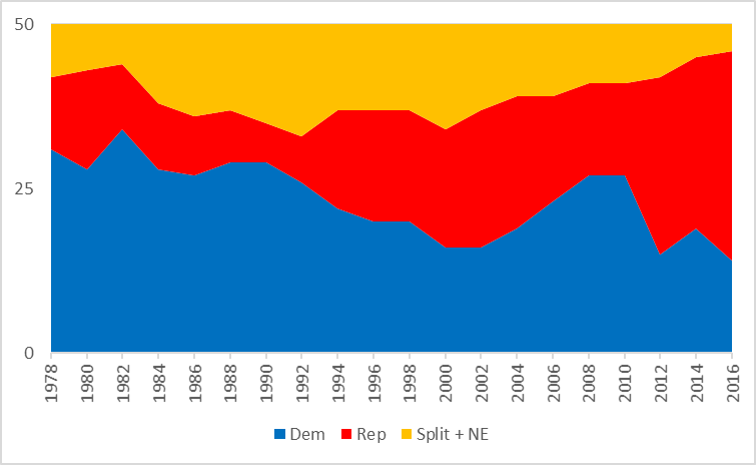 So any idea why state houses aren’t switching as much? is it gerrymandering, or just high turnout among republican voters since 2018 and 2020 were democratic years?

At least some of it is gerrymandering. The modeling for it got a lot better in the last 10 years and gaining control of state houses to gerrymander was an explicit plan by the Republican party starting in 2010, right when the recent Republican dominance begins.

Thats my assumption at least in part. The GOP won big in 2010 and then made it so they can’t be voted out of office except in a landslide.

Like in the Wisconsin state house elections of 2018, democrats won 53% of the vote but won 36% of the seats.

Robin Vos Republican Robin Vos Republican The Wisconsin State Assembly elections of 2018 were held on Tuesday, November 6, 2018. All 99 seats in the Wisconsin State Assembly were up for election. The Republican Party maintained a majority it has held since 2011, winning 63 seats, a loss of one seat, and 44.75% of the voting share. Despite winning a majority of ballots cast, the Democratic Party won only 36 seats, thus remaining a minority and gaining just one seat from the Republicans, distr...

I know there was severe gerrymandering after 2010, but I thought (perhaps wrongly) that it was limited to a dozen or less states. Maybe its more pervasive.

Ticket-splitting has declined, which means it’s harder for local candidates to run very far ahead of (or behind) the national parties’ popularity in their area. Gerrymandering certainly affects this, but the increase in partisan polarization means most states just aren’t competitive enough for it to matter except at the margins. Like, Democrats controlled the Oklahoma House of Representatives until 2004, despite having lost every presidential election there since LBJ won it in 1964; that kind of thing isn’t happening any more.

Another factor is that we continue to sort ourselves geographically by politics. Democrats are increasingly urban and Republicans are increasingly rural. Since states very quite a lot in population, you’re going to see that as a trend toward Republican control if you graph # of state legislatures by party.

Another factor is that we continue to sort ourselves geographically by politics. Democrats are increasingly urban and Republicans are increasingly rural. Since states very quite a lot in population, you’re going to see that as a trend toward Republican control if you graph # of state legislatures by party.

They became overwhelmingly Democrat under bush then became republican under Obama. but they’ve stopped flipping recently so maybe something else is happening.