Why do conservatives take some diseases seriously, but not others?

Although coronavirus-related, this isn’t really a Covid thread, so I’m not putting it in Quarantine Zone:

Conservatives are plenty capable of taking a disease seriously. When there was the (tiny, tiny) risk of Ebola in America in 2014, there was plenty of hype in the right wing about it, and some even dressed up in hazmat bodysuits and protested outside the White House. Sure, one key difference was that it was a Democrat who was in office at the time, not Trump, but the point remains. Many of these conservatives, by the way, probably also bought into the hype when anthrax letters were being mailed in 2002.

But with the coronavirus, somehow it became the conservative thing to ignore or deny the danger. I suspect this is because Covid doesn’t kill in gruesome fashion and that had the coronavirus instead been some disease that gnawed at testicles, caused pints of blood to spew forth from body orifices and killed victims in extreme flailing pain, that there’d be a different response.

What if Covid had been an intentional bio-attack (which it wasn’t, but let’s suppose it had been) - would that get conservatives to treat it differently, because now malice is part of the equation? Or was it just that conservatives can only get hyped up over scary-sounding diseases like hemorrhagic fever and smallpox, but not ones that sound tamer?

Sure, one key difference was that it was a Democrat who was in office at the time, not Trump, but the point remains.

I think it really is that simple. Everything is seen through partisan eyes. They exaggerated the threat of a virus when a Democrat was in the White House, and minimized when a Republican was.

Sure, Ebola death is scary and gross. But I’ve heard a COVID death is pretty brutal too.

Sure, one key difference was that it was a Democrat who was in office at the time, not Trump

I don’t think a Democrat is the reason. When Biden is in power, they are still minimizing the Covid threat, just like as if Trump were still president.

It’s same with the debt and deficit. When a Republican is in the WH, they don’t care, but when a Dem is in, they literally shut down the government due to debt “concerns”. And, the same with bailouts – when the economy was a shithole during the Obama administration, they fought tooth and nail against bailing people out. But, when the economy tanked due to COVID, the were fine with sending out checks.

Suppose Hillary were president when Covid came, and ordered churches to close - you don’t think conservatives would downplay the virus threat and rebel even harder? Because now it would be considered “a facade to enable liberal persecution of Christians.”

You want to Google up some of the videos of patients on respirators in ICUs and compare it to say similar footage of those suffering whooping cough and I’ll call BS on the gruesome bit.

I will take the point that if COVID-19 was a predominantly male infection they’d be much more sympathetic.

Everything, even the gods, were turning against their savior Trump, and they had to turn to the side of death to continue when the pale horse of COVID-19 came around because it was destroying Trump’s reelection chances, The economy would take a massive hit if we had a shutdown and that would reflect on Trump and they knew it. They knew that not even Trump’s lies could hide this. They had to make it a democratic conspiracy to close everything down to get Trump out of office.

You want to Google up some of the videos of patients on respirators in ICUs and compare it to say similar footage of those suffering whooping cough and I’ll call BS on the gruesome bit.

This is where we’ll have to disagree subjectively, and I’m not saying you’re wrong, I’m just saying conservatives don’t perceive it as such. Someone on a respirator doesn’t induce fear the way, say, someone with blood coming out all of their orifices does. Or some covered with hideous smallpox blisters all over their body. Covid just doesn’t strike fear in the hearts of half of the U.S. population.

When there was the (tiny, tiny) risk of Ebola in America in 2014, there was plenty of hype in the right wing about it

I don’t recall “plenty of hype” from conservatives about Ebola - mostly, it was the opposite.

Last week American Airlines reported the first actual evidence that the American people are reacting to the largest Ebola outbreak in history: a one-day hiccup in ticket sales, which appears to hav…

What some right-wingers won’t accept is a strong role for government in fighting disease outbreaks. If it means limiting anyone’s behavior to even a minor extent, it’s viewed as an unconscionable assault on the foundations of liberty. The private sector will come up with the requisite wonder drugs, no problemo.

They are starting to come around, now that the Grim Reaper is starting to lower the number of GOP voters: To answer the OP, in a word: Trump. In January 2020, he had a strong-looking economy, and had just stomped on the necks of the demoncrats’ latest impeachment attempt. Remember Nancy Pelosi ripping up the State of the Union address? His fans were loving it. Then along came the virus, and the images he was cultivating going into the 2020 election were at risk, so he did what came naturally - downplay the virus, no matter what the cost. And since his fans are of the mind that anything the Democrats say, the truth must be the opposite, you got a whole lot of people thinking the pandemic was no big deal, in spite of what their lying eyes were telling them.

I don’t think a Democrat is the reason. When Biden is in power, they are still minimizing the Covid threat, just like as if Trump were still president.

They still remember that it started when Trump was in power. Give it a couple of years and the “memory” will be that everything was going swimmingly with Trump, and then as soon as Biden got into power a plague came.

I recall Obama being blamed for not doing enough to prevent 9/11 attacks.

Obama was being blamed long before that. Limbaugh called it “the Obama recession” on November 6, 2008.

Back on topic: I think conservatives are skeptical of any problem that can be solved or alleviated by government action.

Suppose Hillary were president when Covid came, and ordered churches to close - you don’t think conservatives would downplay the virus threat and rebel even harder ? Because now it would be considered “a facade to enable liberal persecution of Christians.”

I think this is a good point, if Hillary were president she would have lost re-election because for having a death toll of over 100,000 despite “draconian” social distance requirements.

I don’t recall “plenty of hype” from conservatives about Ebola - mostly, it was the opposite.

Well the national review is a pretty level headed publication as far as right wing sources go. Looking at Fox news you get a different impression:

What a lowlight reel. 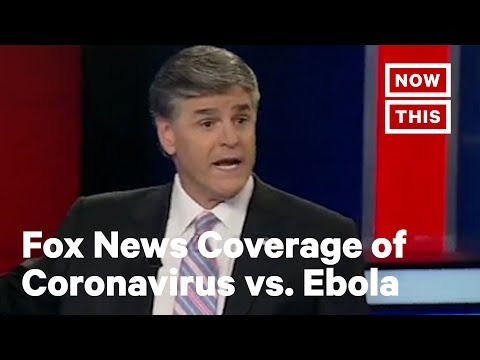 It has nothing to do with Democrats versus Republicans, or Ebola vs Covid, or general hypocrisy in politics. The reason Republicans downplay Covid is one word: Trump. Trump needed to downplay the urgency of Covid (because his re-election chances depended on a robust economy) and all Republicans went along. Even though the political necessity is long gone, they can’t stop.

“It’s a disease that hits others, and you are exaggerating the risk to me, to trick me into supporting the policy decision you want.” Seen/heard it before.

Some of us remember when there was a novel deadly infection, that some conservatives even in top leadership would not even mention much… except to point out it mainly hit homosexuals and heroin users. Nice try, liberals who want to teach my children it’s OK to have sex if you use condoms.

Dying on a ventilator with no visitors allowed is assumed to be a “first world” way to die. The family does not get to see you visibly turn into a living corpse before their eyes.

Plus frankly, anything short of the dead piling up in their driveways will fail to faze some of them. The average voter has no idea what the normal mortality rate is and the average person alive today in the US has little concept of what are the normal rates of fatal or long-term disabling outcomes of even “regular” diseases (see: Antivaxxing from pre-2020). We’re victims of our own past success.

When Ebola hit, I didn’t have to change my behavior at all. I didn’t get vaccinated for it (I’m not aware if there is an Ebola vaccine). By contrast, when COVID hit-19, I had to wear a mask outside for 16 months, could not meet with friends, and went outside a lot less as well. My work became online only. A family member died and I had to attend the funeral virtually. Schools had to shut down, which didn’t affect me but is profoundly disruptive and life-altering. I’m an atheist but my mother is a Christian and hated that she couldn’t go to church. (She also isn’t web-savvy enough to attend virtually.) Fortunately the church she goes to didn’t try to stay open during a pandemic.

(When I refer to “the government”, I’m not referring to parties. Dr. Fauci isn’t an elected official, for instance. Of course, Democratic governors generally treated the pandemic more seriously than Republican governors, so things quickly become political anyway.)

Kimera, I think you may be on to something, which is that conservatives also seem to have more of an IDGAF attitude when it comes to non-contagious diseases, too, such as obesity-or-diet-caused issues. Conservatives seem to be a lot more averse to quitting red meat, processed meat, eating more veggies, etc. Maybe less willing to stop smoking or drinking too. Not that there aren’t unhealthy liberals but to stop or slow these diseases requires big changes in lifestyles, and conservatives may be defiant against such changes. (Plus, if one believes in a religious afterlife, there is less to fear about death or bad health, but if one believes there is no afterlife then you better take care of your body in this life.)