Why do medieval drawings look the way they do?

I’ve seen many medieval drawings/paintings/tapestries, and the figures just have a certain look to them. 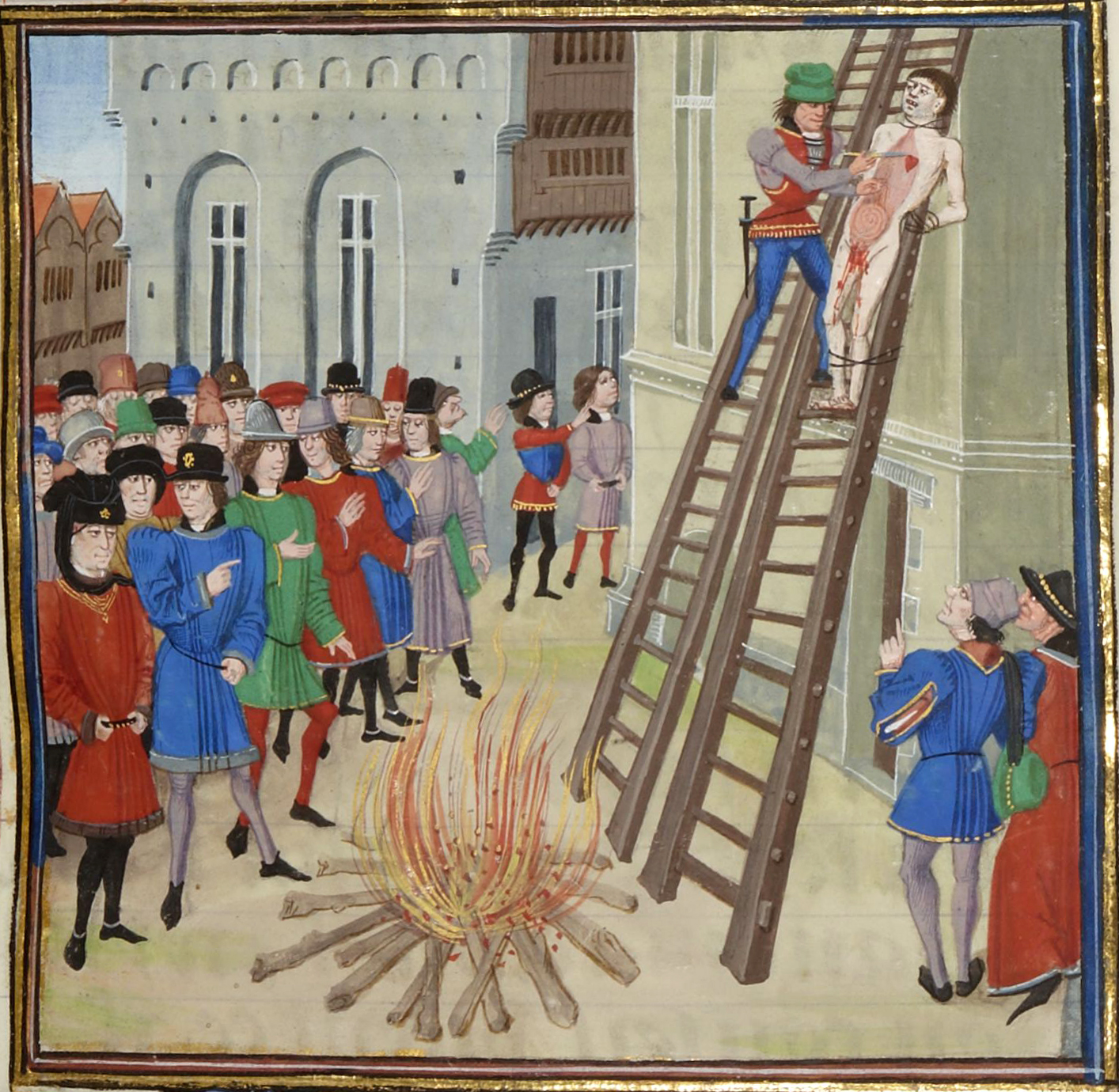 The way the faces are – they don’t look fully human at least according to my biased modern eyes. I am not criticizing the style, but is there any explanation to why the medieval people drew like that? It is illogical that people would have looked significantly different, but why do they have that ‘look’?

Part of it is down to the equipment they used. Most medieval portraits were painted on planks with grainy ochre-based pigments so it took a very skilled artist to get any kind of detail in the picture, and part of it is, crazy as it may sound, proper perspectives hadn’t yet been developed. It wasn’t until the renaissance that artists developed ways to optically transfer a 3D perspective to a painting, up until then the best they could do was an estimate that usually comes with that “off” look in posture and body proportions.

Because that was the style of the time.

I’ve seen many medieval drawings/paintings/tapestries, and the figures just have a certain look to them.

What a lovely picture. Could you imagine that hanging on your wall?

What a lovely picture. Could you imagine that hanging on your wall?

Oh, I see you have a good conversation piece over there Mr. Torquemada!..

And why does the victum have a kielbasa where his intestines should be? And a Valentine shaped heart? And why is he giving a vaguely, sultry look to the guy with the knife? Do they have something going on after the disembowelment?

The bases of the ladders are too close to the fire, where is OSHA?

If I were asking questions about that painting . . . the style would be the last thing I’d be asking about.

That looks more like a modern picture with artistic license at interrupting a medieval style painting. That lady and guy on the left look like singers from the 1970’s or early 1980’s. Maybe ABBA. Why do you think that was done by a medieval artist?

I’m thinking maybe it was more like cartoon style, and that photorealism wasn’t in vogue because it was too difficult. We often still do it today with CGI. (And, no, Avatar does not look realistic.)

Why do you think that was done by a medieval artist?

Probably because Jean Froissart died around 1405.

I don’t really understand the idea that the Medieval artists “weren’t able” to draw correct body proportions. The figures carved into Trajan’s Column in 113 AD and scenes in countless other reliefs from Roman or Byzantine times show that artists were clearly capable of showing correct and lifelike proportions, if not perspectives, so I don’t understand why artists in England and France more than a thousand years later wouldn’t have been able to similarly create human figures that looked more realistic. I think it’s more likely that it was a stylistic convention of the time than that the painting of Despenser being killed is truly the “best” art that Medieval artists were capable of.

Back to the original question: my recollection is that it’s not until the Renaissance that two things happen:
(1) Corpses are dissected by artists, to study anatomy, the underlying muscle structure, etc.
(2) Perspective is invented, to give a sense of roundness and depth, not just to landscapes but the faces, hands, etc.

Probably because Jean Froissart died around 1405.

It’s linked to a picture with no signature or text. I’m glad you can identify this picture without it.

It’s linked to a picture with no signature or text. I’m glad you can identify this picture without it.

It’s on Wikipedia and says Froissart right in the title, just how difficult do you think that information was to find?

It’s on Wikipedia and says Froissart right in the title, just how difficult do you think that information was to find?

Why do medieval drawings look the way they do?

If you refer to the picture link it’s an encoded link. Maybe this thread should link to the wiki page then and not just a picture. I’ve never heard of Froissart and a link to the relevant page would have solved that. Asking whey the OP thought it was a genuine medieval picture is not unreasonable, because it was just a picture. It also does not give credit to the source since only a picture is linked without the credits.

Is this a Monty Python sketch?

Here is the full link from the address bar of the linked page.

Look starting around the 61st character.

I don’t really understand the idea that the Medieval artists “weren’t able” to draw correct body proportions. The figures carved into Trajan’s Column in 113 AD and scenes in countless other reliefs from Roman or Byzantine times…

113 AD is hardly Medieval. The extensive study of the human form in classical times was not passed down effectively to artists more than a thousand years later; it had to be rediscovered and redistributed in the Renaissance.

The figures on the left look short because that’s the artist’s way of indicating they are farther away. This is a step up in realism from when figures were sized based on their importance.

Part of it is down to the equipment they used. Most medieval portraits were painted on planks with grainy ochre-based pigments so it took a very skilled artist to get any kind of detail in the picture.

Slight sidetrack. Was this the only kind of material that medieval artists used, or was it just the stuff that was most likely to last 600+ years so we could see it?

Because being an artist is hard. It is particularly difficult to create realistic representations of three dimensional things in two dimensional formats. Beyond having innate talent and artistic ability it takes the learning of specific sets of skills and techniques to make realistic paintings (and sculptures, etc). Sometimes these skills and techniques can be learned by years and years of trial and error by an exceptionally talented artist with great ingenuity and determination, providing he has the time, money, and resources required to make such advances. Even then a good artist with all those things going for him may only crack into one or two of the dozens of techniques required in making great realistic representations. Usually, however, these techniques are learned from other artists through a long succession of handed down knowledge and careful tutoring and mentoring. Novice artists learn from masters, and fellow artists share with one another what they learned in their own education. Skills, techniques, and technologies are thus added to the repertoire of artists in general as long as information continues to be shared, practiced, and codified.

Sometimes, however, the line of education is broken and the knowledge is lost. This happened in Western Europe during a period sometimes known as the “Dark Ages” when classical Rome collapsed around 400 AD to around 1000 AD when feudal Europe gained full steam. Thus one way of looking at Medieval art is tracking the slow relearning of previously known techniques and technologies in making representational art. They were doing the best they could in the Middle Ages, and consistently making progress. By the time of the Renaissance most of what was lost in Western European art was relearned, and the improvements in technology, communications, and education made possible even further improvements toward making realistic paintings and sculpture. By this time the techniques for creating realistic scenes and figures (such as chiaroscuro, perspective, sfumato, and foreshortening) could be learned by aspiring artists because of a centuries long “conversation” by a long line of serious hard working artists handing down knowledge practical and theoretical. Renaissance artists didn’t just suddenly decide to start painting better portraits, they were using the accumulated knowledge of their teachers mixed with knowledge gleaned from other, previously isolated cultures, mixed with a good measure of their own genius.

Some art historians would also argue that Medieval artists were simply less concerned with realistic representations and more concerned with symbolism, meaning, and storytelling. While I think there is some merit to that, I also believe that any look at a timeline of Medieval art shows a true progression toward better realism and thus shows a cultural desire towards that end.

On a personal note I actually prefer the character, symbolism, storytelling, and simplicity of Medieval art over Renaissance art. The Medieval section is the first and sometimes only section I visit at art museums. And you can bet damn well if I owned that Froissart I’d display it prominently (though it isn’t a painting so it wouldn’t really be hung on a wall).

Another questions: Who was the victim supposed to be, and is this the earliest depiction of someone “hung down to his knees”? No wonder everyone’s pointing.