Why is the 23rd psalm the one that is so well known and popular?

Out of 150 Biblical psalms, why this one? Most everybody knows it by heart, even non-religious people. How many people even know the opening line of another one of the 149 psalms.

WAG: the Psalms are all over the place. Many are strictly liturgical - praises of God meant to be recited/sung during worship. Others are what theologians call “imprecatory” - that is, invoking judgment and calamity on the writers’ enemies. Others fall into this category or that category.

The 23rd, by contrast, is heartfelt, emotive, and, most importantly to the believer, a genuine and moving description of the writer’s relationship with his god. It’s also comforting (or intended as such): even though the writer is walking through a metaphorical and figurative hell, he’s being guided by his god.

It strikes all the right notes with believers.

Modern day? I would say it’s because in the English speaking world it has become heavily associated with funeral liturgies which is one of the few times people actually are in religious services. That also makes it a more constant scripture reading. Other religious readings tend to get hit much more rarely.

As for other Psalms, they are poetry and Psalms 23 enjoys the benefit of brevity and a relatively positive message. It was well-written in the KJV and I think most people would say the wordplay is meaningful and beautiful. Many of the Psalms are less positive. They are frequently laments and filled with doubts. You look at just one Psalm before Psalms 22 which is another relatively popular Psalm particularly during Lent, it involves the Psalmist crying out that God has forsaken him and doesn’t hear his prayers. He trusted God and hears nothing, but is forced to wait as life attempts to destroy him and a silent God sits and does nothing. This is not an uncommon theme in the Psalms and it’s hardly surprising that such Psalms while read and cherished are not nearly as popular as “I am a beloved lamb protected by a loving God who sacrifices for me and gives good things even in the presence of my enemies.”

Modern day? I would say it’s because in the English speaking world it has become heavily associated with funeral liturgies which is one of the few times people actually are in religious services.

^ This.
We go to funerals for the person/family. I’ve never heard someone say they wouldn’t go to a funeral because the decadent wasn’t the right denomination so even if you’re of a different religion/non-religious you still hear that psalm.
On a side note, growing up my friend’s parents had some ‘art’ on the wall in the basement where we’d play. It was a cartoon drawing of a caveman-like guy in a wife beater dragging a big club. At the bottom was the text, “Yea, though I walk through the valley of the shadow of death, I will fear no evil for I am the meanest son of a bitch in the valley.”

It’s still hard to not break out in a smile & think of them when that’s read.

It’s actually quite well written and nice, but it’s one of those things cheesy and overdone enough that it became part of the culture.

It also is useful and readable even if you don’t believe in the Bible, but just believe in God.

Why is Psalms so important that it gets a read every single week? Never could figure that out.

In any collection of poems or songs or other works, there are almost always going to be “greatest hits” that stand out. But it’s still a reasonable question: why this particular one?

In addition to what others have said, my WAG is that this psalm is particularly popular among Christians because it resonates with the image of Jesus as “the Good Shepherd.”

All right, I think it’s not against the rules to post it here as a service to those (like me) who have no idea what’s Psalm 23.

A Psalm of David.
The Lord is my shepherd; I shall not want.
He makes me lie down in green pastures.
He leads me beside still waters. He restores my soul.
He leads me in paths of righteousness for his name’s sake.

Even though I walk through the valley of the shadow of death, I will fear no evil,
for you are with me; your rod and your staff, they comfort me.

You prepare a table before me in the presence of my enemies;
you anoint my head with oil; my cup overflows. Surely goodness and mercy shall follow me all the days of my life,
and I shall dwell in the house of the Lord forever.

Out of 150 Biblical psalms, why this one? Most everybody knows it by heart, even non-religious people. How many people even know the opening line of another one of the 149 psalms.

Me, for one. I decided to get out the Psalms and scan them and of first lines at least a couple dozen leaped up. Can’t say I could have recited them without looking, maybe half that many, but the others are familiar, some more as quotes. When Jesus was on the cross and cried out “My God, my God, why have you forsaken me?” he was quoting the opening verse of Psalm 22.

And one of my favorites is the opening of Psalm 19 “The heavens declare the glory of God, and the firmament shows his handiwork.” There was a recent thread speculating what the first person to step onto the surface of Mars would say. I figure that NASA would script it, but how could they enforce if? That is, if the speaker didn’t care about their career after they got back to Earth. 19:1 is what I would say.

I agree that it’s familiarity is partly due to it’s usage in liturgy. It is short, although nine others are as short or shorter. At six verses it’s easy to memorize too, or engrave on plaques.

It’s short and a lot of people feel it has personal meaning for them.

Why is Psalms so important that it gets a read every single week? Never could figure that out.

Perhaps because the psalms were written as songs, and were often sung in many different forms of liturgy over many centuries.

In a sung service either the whole congregation or the choir sing the psalm, rather than the text being read out.
The Old Hundredth (100th psalm) is also pretty well known. The tune was written in the 16th century and is still used all the time, in Anglican services at least.

All people that on earth do dwell,
Sing to the Lord with cheerful voice. 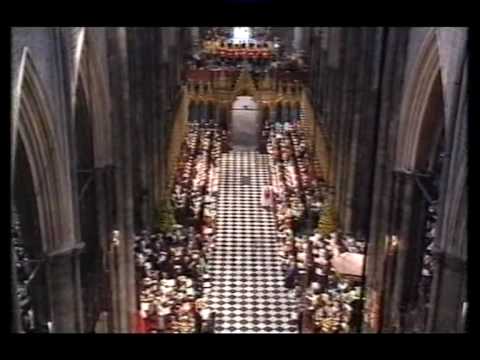