Will Biden Exclude Trump from the Presidential Inauguration?

Yes, I know some people believe that Trump will be impeached or Article 25’d. I also know that many others believe Trump will refuse to attend. But I’m curious if Biden will decide that Trump should have no part is his presidential inauguration. Thoughts?

Among the perfect storm of COVID and political unrest, the inauguration should be limited to Justice Roberts, the Biden and Harris families, and a battalion of Secret Service agents.

Good point, are they really going to have a full blown, public inauguration? Don’t you guys have any rules around mass gatherings?

Pretty sure Biden doesn’t have the authority to do anything of the kind. I suspect that there will not be a big ceremony though.

Good point, are they really going to have a full blown, public inauguration?

No, it’s limited. I think Trump would be included if he agreed to come. I’m starting to think Mike Pence will be there.

I see no reason why Trump would be specifically excluded (with the caveat that health reasons for minimizing attendance obviously apply here). I agree that it’s unlikely he would, and that Mike Pence would likely attend instead as the “respectable” face of the outgoing administration.

Mike Pence would likely attend instead as the “respectable” face of the outgoing administration.

I did not think either would go, but I think Trump is disqualified from 2024 now and Pence might show up so he can run in 24.

Pretty sure Biden doesn’t have the authority to do anything of the kind. I suspect that there will not be a big ceremony though.

Who does have the authority then? Going from memory, there’s an inauguration committee made up of representatives from several groups including D.C. government, the federal administration, White House permanent staff, law enforcement, the Secret Service, and the president-elect’s transition team. However, it’s the president-elect’s representative’s on that team that have decision-making authority unless the decision conflicts with mandated responsibilities such as security or public safety. If Biden’s representative says Trump won’t attend, who’s going to override him?

I cannot imagine Trump would come, but if he does, Biden won’t stop him. After his performance yesterday, I fully expect Pence to come. He has clearly defected from Trumpism.

Honestly not sure, but depending on which element of the inauguration we’re talking about here the jurisdiction will change. The big ceremony on the front steps of the Capitol are managed by the JCCIC which is a Congressional body. It takes place on the Capitol grounds which probably puts it in the purview of the Capitol Police and the Sergeant’s-at-Arms of the Senate and House. It could be viewed as a public space where the President doesn’t actually have any authority to enforce anything and it would fall to the Mayor of DC. Biden’s powers don’t actually kick in until he takes the oath, so even he had jurisdiction he couldn’t give any orders until well after Trump stunk up the place.

Practically speaking, Biden could make his wishes known and it would probably happen, but if Trump dug his heels in and insisted on showing up you’d likely end up with a bunch of people staring at each other with no idea who to listen to. It may come down to the simple question of who has the power to kick a trespasser off the Capitol steps and does that authority extend to the still sitting President. My guess, is probably not based on previous precedents.

I thought he was toying with a virtual ceremony to avoid drawing a crowd and spreading Covid. I’m sure I read it somewhere, days ago now, but can’t remember where.

Thanks Omniscient, that’s good information. I wasn’t aware that the JCCIC and the Presidential Inauguration Committee were separate bodies. For anyone who’s interested: https://www.inaugural.senate.gov/partners/

It’s too bad they can’t strap Trump into a chair, tape his eyes open and mouth shut, and force him to watch.

So a repeat of what happened to Hillary Clinton. 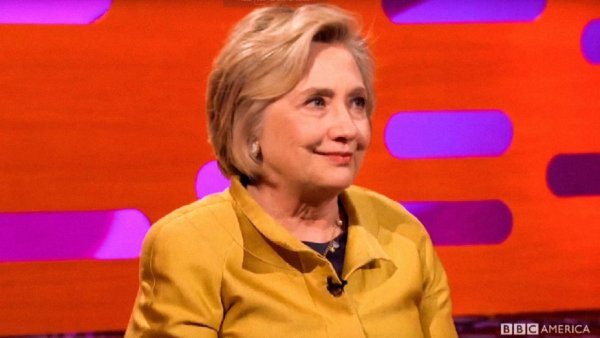 During an appearance on ‘The Graham Norton Show,’ Hillary Clinton detailed her dilemma, and disappointment, with attending Trump’s inauguration.

So a repeat of what happened to Hillary Clinton.

Can you share what this is in response to? I don’t understand the relevance to the OP or any subsequent post.

Can you share what this is in response to? I don’t understand the relevance to the OP or any subsequent post.

Running Coach made a smart-ass reply about Trump being forced to attend the inauguration of his election opponent. I continued the smart-assery by pointing out that circumstance occurred four years ago.

Ideally, Trump would be watching from a prison cell while awaiting trial for inciting sedition.

Ah, I see the context now. Thanks!

Hillary’s situation was much more of a high school peer pressure thing (“Are the Bushes going? If they don’t go we don’t have to go”) than the Clockwork Orange situation running_coach proposed.

Good point, are they really going to have a full blown, public inauguration? Don’t you guys have any rules around mass gatherings?