It was a typical Friday night in stately Mercotan manor yesterday, with me sitting in the loo, on my throne and enjoying the bidet seat. At least, until I heard a shriek from a distant part of the house. Mrs. Mercotan was unhappy; reason unknown.

Before I could even end the ablutions, much less re-attire myself into my hero vestments, she was pounding on the bathroom door and announcing at ear piercing pitch and decibel level: “There’s a bat in the kitchen!”

Oh crap. I hate bats in the house.

I recognize their purpose in the scheme of things, promote them locally as I want to diminish local mosquito population. I’ve even gone to the extent of putting up bat houses far from our abode to encourage a flourishing population.

But in the house is not the place for them. While we’ve gotten over the creepiness factor for the most part, bats in our area frequently carry rabies. The niece of a woman I used to work with was scratched/bitten by a bat, told no one, and the fact wasn’t found out until she had developed rabies itself. This young girl luckily survived, by using an experimental therapy in which she was placed in a coma for a time, and powerful drugs used to shut down as much of her nervous system as possible. She survived rabies thanks to this treatment, but this treatment has failed to help others. She also needed a boatload of therapy over years to recover (nearly fully, I’m told).

So bats in the house are a no go. However, we have practice at this; it’s not our first bat rodeo here on the estate. So after I charged into the kitchen and determined there was absolutely no sign of our bat, we assembled our gear: Lacrosse sticks, towels, gloves. In my last 3 outings of me vs. bat, I carried the stick into the engagement twice and each time it helped me deal with the situation most quickly. I was able to knock it out of the air each time, then trap it under the stick. Never managed that with my earlier implements of bat attack: Trash can lid and badminton raquet.

So we were geared and ready. I had an attack man’s stick, the Mrs. had the longer defender’s implement. As we stood guard, waiting to see something, she informed me the bat must have come in on the ladder she’d carried in from the garage. Unfortunate but not unusual. She’d not noticed it until our cat, Wowbagger, dashed after something. Then she saw it, orbiting the general kitchen area. This led to the aforementioned shriek.

So we waited. And we waited. And we cautiously poked around our kitchen area. We know where bats might go, and there were a LOT of places to look. And that was just the kitchen; it had full access to the laundry area, dining room, living room, upstairs library, foyer, downstairs rec room, library and tool rooms too. Ugh.

After about 5 minutes of nothing we decided: We’ll leave the cat in the kitchen/rest of house overnight (instead of his usual sleeping quarters), and barricade ourselves in the bedroom. And see if the cat dealt with the problem overnight, hopefully leaving enough evidence to show us he’s dealt with it. Wowbagger has had his rabies shots, after all.

But at that moment, I noted that the estimable Wowbagger was suddenly fascinated by a pair of binoculars we keep on the kitchen window shelf. They are there, ready to use, to identify passing ore boats or people walking along the beach. They’ve been in that spot for at least 2 decades, and the cat didn’t give a damn about them before.

But he was nosing them now, standing on hind legs to reach them, batting them with a paw. Hmmm, what could that mean? Well, my mother didn’t raise any idiots. A few fools maybe, but no idiots. I had my “aha” moment fairly quickly.

With left hand I grasped the dangling strap on the binocs, with right I held the attack man’s stick. I pulled the binoculars back a bit, to reveal a tiny, cute little bat, huddled on the shelf. Logistics of a capture strike were poor, as the shelf was narrow, filled with other obstructing items, and any flaw in the grab would result in the bat flying off again. But an execution strike right onto its neck would be easy. So I muttered an apology to the little bat and to the universe in general, and broke its neck instantly with the lacrosse stick. <<sigh>>

Scooping the corpse up in the stick, I ascertained all others in the room were well, & the Mrs. denied any close encounters with the dread beastie other than it soaring around the room around her, and no reported injuries. So with lax stick still loaded with dead bat, I went outside and flanged (flung?) the carcass into the nearby woods.

We duly celebrated with great praise unto Wowbagger (may he be infinitely prolonged), giving cat treats, pettings, snuggles and head banging (which he adores). And called it a night.

Next morning while I’m at work, the Mrs. contacts me, reporting she’d woken up that AM (after my departure) to note a scratch on her finger, which had bled slightly and scabbed. She had no idea where it came from, but thought she might have scratched it while carrying in the ladder. Or maybe the bat bit/scratched her as she carried the ladder. So off she went to start her series of rabies shots. She had looked for the bat corpse so it could possibly be examined but to no avail. Besides, local health authorities told her it took 48-72 hours to test an animal for rabies, and the vaccine should be administered before 72 hours was up, if it was needed. So don’t bother. My former college roomie and current ID physician confirmed all that, plus the definite desirability of getting the vaccine in her situation.

So the Mrs. is enjoying both the social status of needing rabies shots (a more desirable status than needing lyme disease treatment in our social circles) and feeling that our cat, Wowbagger the Mercotan, has truly gone above and beyond typical cat duties. I agree with that latter assessment, and while in the past have given him grudging respect (for being a good nap partner and terrorizing and devouring local squirrels), now I tender him my admiration. He of course doesn’t care, and takes all affirmation as merely his due.

Also: Probably the best consequence of me having spent 8 years at Johns Hopkins was me having lacrosse sticks in the house.

I know that you are a MD and you have my highest respect, but are you aware that most bats carry a virus that presents like rabies, but isn’t. I think its a sort of herpes thing, but its not rabies, however the blood work shows something like rabies, so everyone thinks that every bat in the world is rabid.

Of course nobody wants to risk getting rabies so its good that the Mrs is getting treatment, but I really don’t think she is at risk.

Poor bats have such a bad rep, and they are mostly innocent.

I was surprised to see lacrosse sticks in your armament.

My mom claimed to see a bat in our house in Tahoe. I dismissed it completely, figuring she was old and crazy.

Then a few months later, I’m up there skiing and, what’s this? Flitting around in the upper room, a fucking bat!

Don’t know how it got in, don’t know where it went. But it was in there.

Give Wowbagger a head bang for me. And my best to Mrs. Mercotan.

Why not just have everyone get a rabies shot, along with all the other vaxxes that us rational people get? Or, at least all people living in areas where bats are common?

What are the arguments for and against that?

If I understand right, rabies shots are no longer the torturous treatments they used to be. And in particular, if one gets a pre-exposure shot, like most dogs do, isn’t that just a simple vaccination?

Also: What, no butterfly net in your arsenal? I’d have thought that would be a good bat-catching tool to have handy.

Ha! Very nice OP.
Cats as hunting companions! I can get behind that idea.
Goodluck to the Mrs.
Headbumps to the feline!

There ain’t nothin’ like a good kitty when you need one.

But am I the only one who paused briefly when reading the story—to wonder how many people other than the Mercotan family keep a pair of binoculars on their kitchen window?

…And that was just the kitchen; it had full access to the laundry area, dining room, living room, upstairs library, foyer, downstairs rec room, library and tool rooms too.

Great story but as I was reading along picturing the stately Mercotan manor I was awaiting a further list of rooms. Such as: ballroom, sitting room, maid’s quarters, banquet hall, boiler room and dungeon.

Surely the grand double doors to the ballroom would be kept closed - otherwise all the balls would roll out.

I crack me up!

you really can tell a story!

when you feel like it, can you share why “Wowbagger” for your cat’s name? perhaps you’ve talked about this before and I missed it.

It should be mentioned that if someone awakens from a night’s sleep to find a bat in the bedroom but has no evidence of a bite or other injury, that is still considered a significant exposure, and likely justification for getting vaccinated against rabies (bat bites/scratches can be hard to detect, and victims have contracted rabies in this manner). 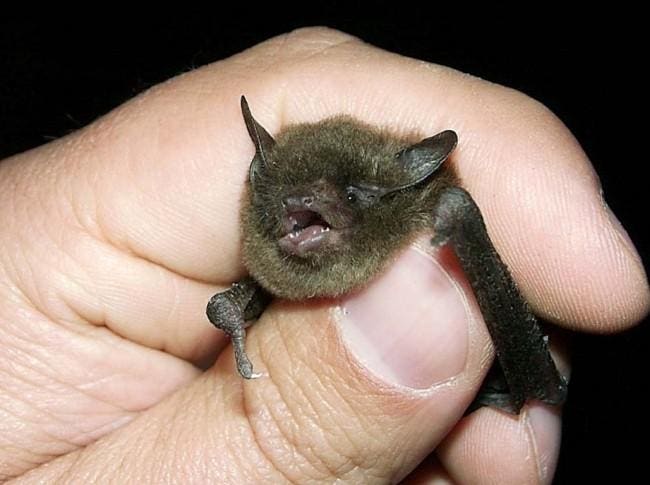 Bats In The Bedroom? What You Should Know About Rabies

An elderly Wyoming woman died of unsuspected rabies, exposing a number of family and healthcare workers to the virus and necessitating their treatment. This week, the CDC's Morbidity and Mortality Weekly Report (MMWR) shows missed opportunities in...

Qadgop might also want to think about taking the cat in to the vet for examination and possible rabies vaccine booster (even vaccinated pets generally get boosters if bitten by a rabid animal, which of course has not been established in this particular case).

He of course doesn’t care, and takes all affirmation as merely his due.

just be glad he hasn’t called you a complete kneebiter yet.

Hooray for the hero cat!

you really can tell a story!

when you feel like it, can you share why “Wowbagger” for your cat’s name? perhaps you’ve talked about this before and I missed it.

I think its a sort of herpes thing