WTF is this Wumo comic about?

Yesterday’s Wumo. I don’t often find Wumo funny but at least I see what they’re trying to do. But this time I have no idea what anything is or what it means.

Forklift driven by some sort of beast, carrying a flaming eye, two designers or something, the Chrysler building, an erupting volcano…WTF?

Isn’t it clear?
It’s Sauron, reviewing the model of his new tower with his architects.

I guess it would be clear if I had known who Sauron is. I am not a LOTR fan. Never heard of him.

Yes, I can see not knowing the characters would make the cartoon hard to understand…

Interesting choice for a comic syndicated in newspapers.

It’s a joke about something that was immensely popular about twenty years ago. Seems par for the course for a syndicated comic.

Interesting choice for a comic syndicated in newspapers.

It seems weird for my local newspaper to have a sports section when I’m not interested in sports, but c’est la vie.

I think you’re underestimating the cultural penetration of LotR. Which is not to say that “most” people are fans - but they are some of the most profitable movies ever made, and have had enough sustained interest that, twenty years later, Amazon is dropping hundreds of millions to make a LotR TV show. Having a LotR reference show up in a bad syndicated comic is only a little more surprising than a Star Wars reference.

I’ve seen the phrase “Eye of Sauron” appear in enough non-LotR related articles as a symbol for something baleful watching over an event to figure it’s a decently well understood reference.

This is general cultural knowledge at this point though of course not universal.

ETA: My apologies, all 3 Hobbit movies & all 3 Lord of the Rings movies are top 100 earners.

As somebody long ago told me on SDMB when I asked for an explanation of a comic strip: the joke’s on the OP for trying to find humor in a Wumo comic.

I think you’re underestimating the cultural penetration of LotR.

OK, I admit I am pop-culture impaired.

the joke’s on the OP for trying to find humor in a Wumo comic.

Yes, there’s that. Like I said, I don’t normally find it humorous, but usually I can tell why the authors think they have done something humorous.

So Sauron is just a big flaming eye with no body that lives in a tower?

For the movies, pretty much. For the books, no, just no. But he is disembodied and Peter Jackson came up with a good visual for a visual medium.

So Sauron is just a big flaming eye with no body that lives in a tower?

There a quite a few posters on this board who are far more expert in the works of J.R.R. Tolkien than I am, so I’m likely to be corrected on this, but I don’t think that’s right. Or not exactly right.

Tolkien wrote in a style that relied heavily on evocative imagery and metaphor, not detailed physical descriptions. He also was drawing heavily on authentic European folklore and mythology, which was often a complex mix of fuzzy and outright contradictory terms and images.

Sauron was a malevolent entity. At some times, in some places, for some purposes, he had a physical form that was in some ways analogous to a human (he had a hand with fingers on which he wore the One Ring). At other times, in other places, he was a disembodied spirit. He might even have been both at once. That’s not a way of thinking about things that makes much sense to most of us in a post-industrial 21st Century culture, but in pre-modern cultures, that’s not uncommon.

Sauron also had a “lidless, burning eye.” We don’t really know to what extent that was a metaphor, or a physical reality, or a psychic impression, or something else.

Which is all great on the printed page, but movies need physical images. For the Lord of the Rings movies, Peter Jackson interpreted the “lidless, burning eye” as literally as could be - Sauron’s tower literally had a gigantic eye made of flame hovering over it. The cartoon is an accurate representation of the movies’ version of Sauron at the time they mostly took place.

I know Sauron is the big bad guy from Lord of the Rings with a volcano lair, just as general knowledge (I have never seen the movies and only read The Hobbit).

I know what he looks like from The Lego Batman Movie (2017). 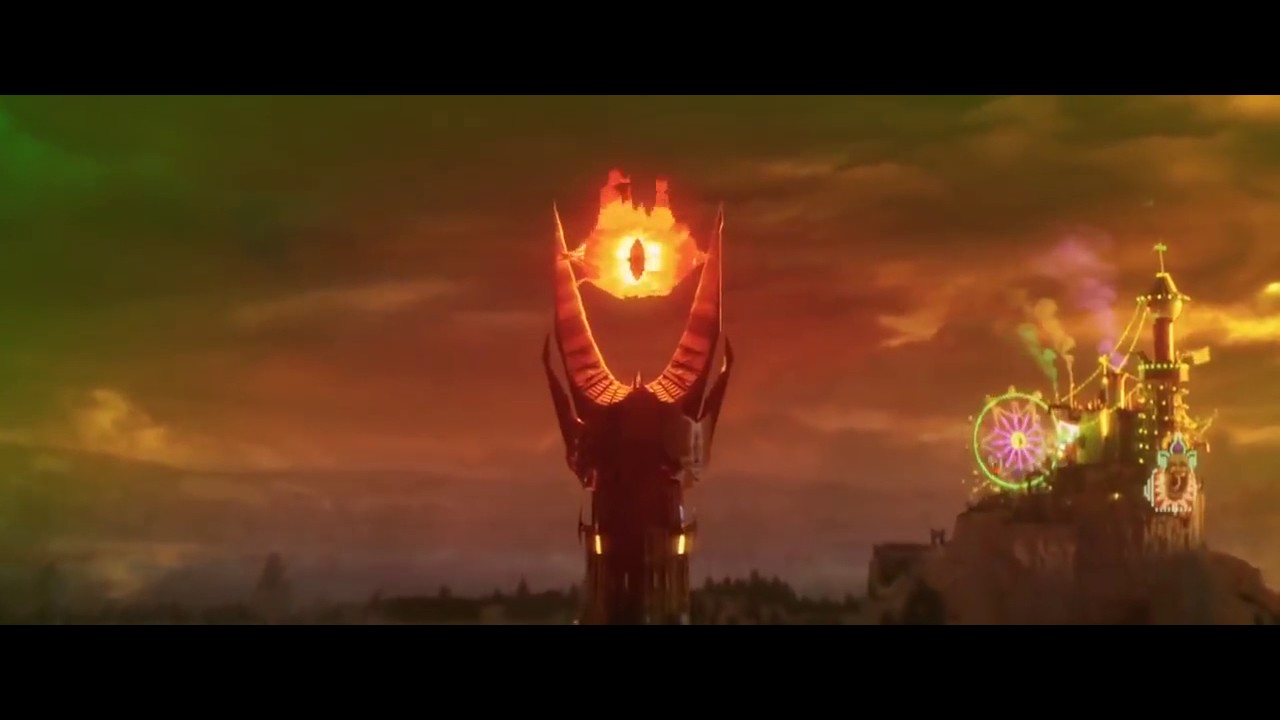 And at one point, he was able to appear pretty much however he wanted, and predictably for a being who could choose his own appearance, he usually chose to be quite attractive. But long before the Lord of the Rings books, he lost the ability to take on a fair form, so whatever forms he had in recent history were all foul.

I still don’t get it, but don’t bother to explain it.