WWII: Battle of Midway...why couldn't the Japanese have pressed on and captured the island?

In World War II the Battle of Midway is seen as the turning point in the war against the Japanese. They lost four aircraft carriers in the space of a few hours. No doubt that was a massive loss.

That said, why couldn’t the rest of the very large fleet almost at Midway’s doorstep continue? Two battleships, five heavy cruisers and numerous other ships were in that fleet.

The US aircraft carriers, despite crushing four enemy carriers, were not in good shape. One carrier was badly damaged (and would sink later) and their air crews had been severely damaged. I cannot imagine they had a lot of fight left in them. Surely the Japanese knew this. Despite everything they knew there could be no more than three carriers out there and, since they had spent a day fighting them, they had a good idea that had put the hurt on those air crews.

So, why not press on and take the island? Could the US carriers, now down to two with diminished air crews and planes and ammo have been able to stop the Japanese on their own? There was nothing else but them and the (relatively) few people on Midway.

It’s possible they could have taken the island, but holding it would have been problematic. A few random WAGs:

I’m sure there are other reasons as well.

They tried. After the first three carriers were sunk, Yamamota insisted on carrying on with the operation. It was the wrong choice; all that resulted was that they lost a fourth carrier.

Yamamota was a gambler and he got caught up. He kept throwing more money into the pot rather than admitting he had a bad hand and folding.

I’m not entirely sure the Japanese could have taken Midway even if they had sunk the three US carriers and lost none of their own.

The Japanese invasion plan was to land some 5000 troops from the Army and the Navy without specialized landing equipment and without any real naval gunfire support doctrine. The troops were primarily armed with rifles, light mortars, and medium machine guns. There was no reserve.

There is no evidence that these troops had practiced large scale operations together, much less rehearsed the landing. Specialized landing craft like the later American DUKW and tracked landing vehicles were never developed by the Japanese. I can’t imagine that the Japanese had even dreamed of them by this point in the war.

The American forces were about 3600 Marines and other support personnel who were well dug-in. They had a platoon of A3 Stuart tanks in support. Heavy weapons included five 5" guns, four 3" guns, twelve 3" AA guns, forty-eight .50 cal guns, thirty-six .30 cal guns. There was an AA unit attached as well with another dozen or so weapons of 3", 37mm, and 20mm size.

Midway is surrounded by a coral reef through which one boat channel, covered by the heavy guns, had been blasted. The Japanese plan was to use their daihatsu barges to land troops on the reef instead of forcing the channel. From there the troops would have to wade about 200 yards through waters ranging from ankle to chest deep to reach the beach.

I am not sure that any Japanese soldier would have survived to make it to the beach. Wading through 200 yards of water ranging from ankle to chest deep or so? The lagoon would have flowed red with blood.

As for actually holding Midway, or even sticking around long enough to blockade it, OttoDaFE is right on the money for the difficulties the main IJN force would have faced.

Without a reserve, there was no way a second landing could be attempted. Despite the damage done to the their air wings, Task Force 16 (Hornet and Enterprise) still had plenty of dive bombers that had proven against Mikuma and Mogami that they were quite capable of wrecking capital ships.

The only way Yamamoto might have salvaged the situation might have been if Spruance, rather than retiring east overnight, had continued west and run into the remnants of Nagumo’s forces in the dark. Spruance, of course, understood that calculated risk did not include a night battle and rightly kept his distance. With that, Yamamoto had no choice but to withdraw.

Losing four carriers wasn’t the the biggest obstacle to capturing Midway; losing the element of surprise was. Every US submarine and long range bomber in the vicinity of the Hawaiian-Midway chains would be waiting for those Japanese troop transports.

The plan wasnt so much to take Midway anyway, it was to lure out the American fleet and crush it.

Actually a really good point. That was the primary aim.

The plan wasnt so much to take Midway anyway, it was to lure out the American fleet and crush it.

If so then why drag an invasion force along with them?

The primary goal was to lure out and defeat the US fleet, but Midway was the secondary goal.

Yet their actions seemed to suggest they wanted Midway.

Their search for enemy (US) carriers was woefully lacking. They prepped for strikes on Midway and not enemy combatants.

Their search for enemy (US) carriers was woefully lacking. They prepped for strikes on Midway and not enemy combatants.

True for the first, not quite for the second: Nagumo actually held back some of his best pilots (whose planes carried anti-ship ordnance) just in case the American fleet happened to be on the scene. But everybody knew they wouldn’t be, since the plan decreed that it wouldn’t leave Pearl until the attack was well under way. Then it would be harassed by submarines en route, crippled by air strikes once it got to Midway, and finished off by Yamamoto and Kondo’s battleships.

And that was the fatal flaw of operation MI. The operational plan not only laid out an impossibly intricate and precisely timed naval ballet for the IJN, it also decreed what the USN would do in response and when it would do it. Little or no provision was made for deviations (the search and holdback were done because they were part of IJN tactical doctrine, not because anyone thought they would really be needed).

I am not sure that any Japanese soldier would have survived to make it to the beach. Wading through 200 yards of water ranging from ankle to chest deep or so?

Didn’t the Allies do that at Normandy? Not that the Japanese navy gave a damn about soldiers.

They tried. After the first three carriers were sunk, Yamamoto insisted on carrying on with the operation. It was the wrong choice; all that resulted was that they lost a fourth carrier.

Yamamoto was a gambler and he got caught up. He kept throwing more money into the pot rather than admitting he had a bad hand and folding.

IIRC, this was in part due to Pearl Harbor regret. Yamamoto regretted not having ordered an additional strike wave at Pearl which could have achieved highly important damage on the US Navy, and because of that regret then decided to send ill-advised additional strike waves at Midway. There must be some sort of logical fallacy to describe his behavior.

And even if the Japanese had captured Midway, it probably wasn’t worth holding.

And even if the Japanese had captured Midway, it probably wasn’t worth holding.

I think the idea of holding Midway is it is an unsinkable aircraft carrier. From there the Japanese could control a big part of the Pacific. If you look at a map there isn’t much out in the middle. Hawaii was key, Midway would be pretty nice.

The Allies landed on the beach at Normandy, say about 500 yards of mine and obstacle studded clear space with a seawall and cliff tossed in for additional cover. Not a run I would like to make, but with a lifetime’s of dumb luck and hundreds of other boats carrying 50000 troops behind you, you have a decent shot at making it to cover. It may be sand, but it is firm sand and you can run on it.

Midway would be an entirely different proposition. Midway Atoll is surrounded by a sea level reef that encloses a lagoon that is typically about 3-15 ft deep.

I don’t have a source for how many landing craft were assigned to the IJN invasion fleet, but there were only a dozen transport ships and about 5000 men.

You are going to be landed on a reef just inches below sea level and then step off of into a lagoon generally reported from 3-15 ft deep. You’ve still got some 200 yards to the beach itself and you are wading that distance, not running. Pushing your way through waist deep water is slow and tiring. You are trying to keep your footing while artillery is bursting around you. There is zero cover. And gods help you if you step into a spot 6 or 7 foot deep or trip and end up face down in the water carrying 70-100 lbs of equipment on your back. More troops might drown in the lagoon as opposed to being shot.

That’s not to say nobody would make it across, the IJN and IJA weren’t known for being sensitive to losses. But I don’t see how more than 1000 of the 5000 Japanese make it as far as the beach, and none make it off that beach alive.

Here’s a wiki image that gives a good idea of the tactical issue. The reefs and shallows are clearly visible in the overhead. 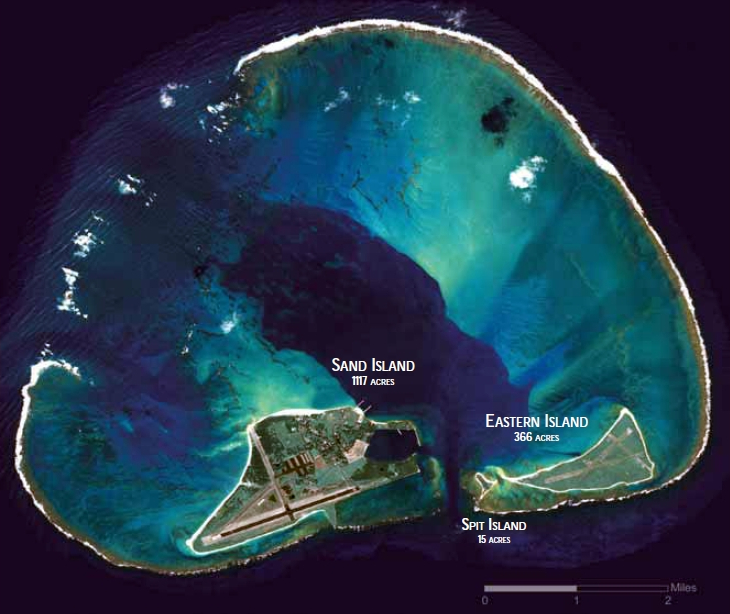 I think the idea of holding Midway is it is an unsinkable aircraft carrier. From there the Japanese could control a big part of the Pacific. If you look at a map there isn’t much out in the middle. Hawaii was key, Midway would be pretty nice.

Then what? Wake and Guam and Rabaul were all islands that controlled big parts of the Pacific. Japan held all of those. The question is what is the strategy you base them on?

The United States had an overall strategy. They were building up a huge army and navy. They captured islands across the Pacific that kept bringing them close to Japan. Eventually they would invade Japan itself.

What was Japan’s equivalent plan? A Japanese invasion of the United States was never going to work. So where were they going from the islands they held? Every time they expanded on to islands further east, it just made their perimeter harder to defend.

Why can’t they land on the side with no reef?

Honestly, Japan lost before they started. They hoped the US would back off after they attacked Hawaii. Once the US chose to go to war Japan was doomed. Admiral Yamamoto even worried about this. He has some education in the US and knew its industrial might and did not think Japan could win a protracted war with the US.

So, the goal was what they hoped would be a knockout blow at Pearl Harbor. When that didn’t do it Midway was hoped to be the next one and give them a toehold closer to the US.

If you were a Japanese admiral tasked with winning in the Pacific, without the benefit of hindsight you have now, Midway looks pretty good.

What was Japan’s equivalent plan?

Smash the American Navy at Midway, land troops on Midway, and maybe bomb the snot out of Pearl Harbor again—this time hitting the oil reserves and repair yards. Then, maybe, that’d be enough of a shock to the United States voter that they vote out the existing Congressional leadership in the midterm election and/or get the US to accept an armistice where the US keeps Hawaii, but restores trading with Japan, and otherwise leaving Japan alone.

Big reach, really big reach, but it might be seductive if the USN got skunked 3-0 vs winning 4-1.