I think education would cure a lot of our ills.

If 4 out of 5 dentists say you should avoid sugary gum and chew the sugar free kind if you’re going to chew it at all, and the 1 remaining dentist disagrees, who do we trust?

Do we trust the experts who have identified something that can harm you and advise you to avoid doing a certain thing, or do we trust the vast minority who disagree?

Shouldn’t our question be, why does the tiny minority actually disagree? What’s their data, what’s their argument, what’s their evidence? I’m not suggesting we simply follow whatever is popular, but if one side has a very strong argument and tons of data which supports their point, and a very small faction disagrees, but has no counter-argument, wouldn’t be interested to know what motivates them to disagree?

Give you another example. Suppose 9 out of 10 scientists suggested smoking caused cancer, and gave you a crapton of evidence and double-blind studies which demonstrated that, and then showed you the rise in cancer among adults who smoke, and the specific kinds of cancer caused by smoking. Wow that seems persuasive to me. Counter-arguments?

Well, say 1 out of 10 scientists argue smoking makes you more healthy. Wow! What data are they looking at? And more importantly, who is funding their research?

How about another example. Suppose creation scientists want to teach us all about the very scientific theory that a wizard did it, and have volumes and volumes filled with absolutely no evidence that suggests a wizard did it. Now, compare that with the sum total of human knowledge which is gained by looking for answers rather than asserting them like a jackass, and lo and behold, there’s a controversy I would love to teach.

Furthermore, I’d love to teach alternative theories as well. I was exposed to several when I was studying greek and roman mythology. Who is to say the world didn’t mate with the sky to create a pantheon of gods? There’s so much evidence supporting that version of events. Let’s teach it!

Stand the theories up, side by side, and then also show the volume of evidence supporting each theory. Let’s also examine who is pushing for us to compare these theories as completely equal in weight, and what their motives are.

The intellectual human being has nothing to fear from such comparisons.

I look forward to my creation science classes. I know passing them will be easy enough, simply write “a wizard did it” in every answer and you’ll do just fine. You might also learn about the guys from a very specific geographical location on the planet, many thousands of generations into human history, who witnessed the wizard do it first hand. Very interesting people who were in no way inclined to tell people fantastic stories in exchange for money, or fame, or control over people, or just to pass the time.

Now, even the folks who deny climate change is a thing caused by humans, agree it is a thing. Why? Because if they have any interest in being taken seriously as a scientist, they have to at least examine the vast, vast amount of data gathered by, you know, experts in the field, the sum of human knowledge on the subject matter, and give it a good peek before totally dismissing it. Seems only proper, after all. I mean, before you call someone’s baby “ugly”, you probably should look at it once beforehand. Saying it’s ugly without looking at it sort of smacks of, I dunno, bias.

So we look at the data and we see that the average global temperature has been rising, in a trend, for quite some time now, and in a way that is sharper and more accelerated than is to be expected in our planet’s natural warming and cooling cycles, which tend to take tens of thousands of years, rather than a century.

An average, as we learned in math class back when pogs were still trendy and peach fuzz hadn’t yet grown on our nutsacks, is not the same thing as taking the lowest number of a set, an outlier number, and describing it as typical or representative of the whole.

In fact, they taught us that an average is some sort of number which represents many data points at once, not just outlying numbers.

What is there to be said?

You can lead someone to facts, but you cannot make them learn.

Let’s teach the controversy. I learned in my college science classes what the vast majority of our scientists think based off of the data, and why. And what processes are in place which cause it. And when the brightest minds of the past several generations and present pretty much all conclude that the average (which is a real piece of actual, y’know, data) is trending higher (also something expressed using mathematics), it seemed pretty clear-cut to me.

It wasn’t something so simple it could be explained in a 30 second infomercial, but my attention span is adequate for the challenge (as would be evidenced by my wall o text posts. If anything I have* too much* attention span).

Now, I’m a skeptical kind of guy, and quite willing to listen to someone tell me my ideas (or someone else’s) are complete bullshit.

So, please, teach the controversy.

Please tell me again how 9/11 was totally an inside job because the buildings were in freefall (except they weren’t, Rosie O’Donnell). Please, show me your work. Especially if it hasn’t already been discredited a million times by thousands of actual scientists.

The wonderful thing about having an inquisitive mind is that you aren’t afraid to be proven wrong.

I’ve got no dog in the fight. I didn’t come up with the idea that sugar rots your teeth, or that smoking is bad for your health, or that life evolved over time, or that the global climate is warming, partly caused by human-generated greenhouse gasses, and is causing real and damaging changes to our environment. I also don’t own a sugary candy factory, or a cigarette factory, nor am I a member of one of those silly organized religions. So I’ve got nothing to lose.

Teach me and everyone else why actual science is wrong, and crackpot pseudoscience and make-believe nonsense are completely true. Please! I beg of you! Tell me again about the rabbits, George!

You know me, I’m just one of those brainwashed dumbasses who drink the Kool-aid served by George Soros and MSNBC, I don’t know a damned thing.

I don’t mind at all that we have Fox News out there teaching us the controversy. I don’t mind hearing the alternative point of view.

I just have one request, just, little… simple thing.

Could you guys take your heads out of your asses for a couple seconds and actually read up on the subject matter, before you take a gigantic steaming dump on it.

You know, don’t be like Sarah Palin and start commenting about controversial subjects without even the slightest fucking clue what actually happened, or having read a single fucking word that was said by the guy who spoke out of his ass and upset people before interjecting her completely brainless opinions into the great big mediascape for us all to have to wipe out of our ears.

Would really appreciate it. Would certainly improve the level of debate, you asinine corporate-owned crack monkeys.

Paid by the letter?

Good lord, I actually took the time to read that and I am thoroughly convinced you need to get yourself checked. You sound like a rambling crazy old man.

Someone wanted everything on it.

Our OP appears to have a habit of posting multi-page screeds about whatever’s got his jimmies rustled at the moment.

I keep expecting to see one about these kids that won’t get off his lawn.

Long winds are one of the inevitable consequences.

I beseech you, conservative doubters— how many more OPs like this one can mankind withstand?

Do we trust the experts who have identified something that can harm you and advise you to avoid doing a certain thing, or do we trust the vast minority who disagree?

No, the “experts” are a bunch of corporate stooges, book learning isn’t everything, science is biased, and I’ve got a long list of scientists and papers I copied and pasted out of PubMed that refutes those “experts” and here’s a petition they signed.

OP is long but entirely worthwhile. Also, while we’re here…

Do global warming "skeptics" honestly see us as a benign species?

The most entertaining thing about “environmentalists” is how conceited they are. To believe that anything our pathetic little species could do would ever affect this molten ball of stone and ore hurtling through the infinite vastness of space at nearly half a million miles per hour; I can only assume your tiny little mind can’t see past the fingertips of your tiny little hands.

This rock isn’t going anywhere and despite what you may believe, nature isn’t going anywhere either. Mother Nature survived far worse than this current infestation known as the human race - and she will long outlive us - until one day when the star that created her will reclaim her.

Well, I might be conceited, but at least I’m not a mentally vacuous retard.

Well, two out of every hundred of whatever (Doctor, Dentists, etc) will argue that Aliens secretly put tracking devices in every piece of gum, or some such bullshit.

We should definitely teach that controvery.

Oh wait, we already have an entire cable network dedicated to that. But it’s still called “The History Channel” for some strange reason.

Protip: If you print it out and fold the paper up real small, it takes up a lot less space.

To be fair, it’s not just one t-shirt but many. Many t-shirts that some of which I was unaware and even doubtful of the controversy-ness of. I had to look up Homunculus, Chemtrails, Phlogiston theory, Russell’s teapot, and the Time cube as they weren’t immediately obvious to me. Of those, I don’t think Homunculus or Phlogiston theory are really controversies anymore. Russell’s teapot really isn’t a controversy at all but rather an interesting philosophical question.

Only 4 out of 5 pizza consumers would call it “cold”.

OK that was interesting, and I got all but one of them with out cheating. (yay me, I know my debunking, but c’mon, cryptozoo? wtf?) 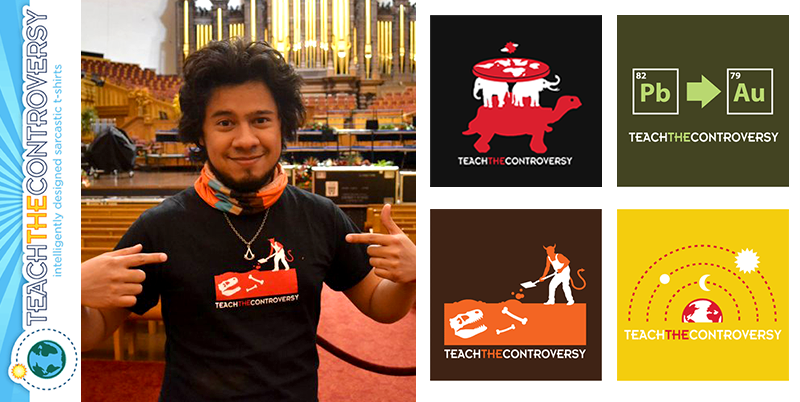 Pro-Science parody T-shirts sarcasically uging schools to teach both sides of all sorts of psudoscience nonsense and mythology. Create your own!

But, and I can’t believe this shit, there wasn’t one for AGW/global warming/climate change.

Which is pretty damn funny since that is actually what the OP is really pissed about.

Or smoking. Or gum. Or evolution. Or … wait a fucking minute.

I freakin’ love those t-shirts.

Of those, I don’t think Homunculus or Phlogiston theory are really controversies anymore.

I don’t think ANY of those t-shirts are actually controversial anymore. Isn’t that the point? It’s irony.

Which is why smoking, mercury in fillings, radioactive cesium pollution, vaccines and global warming don’t show up there.

To be fair, in that “4 out 5 dentist” study, the fifth dentist did not recommend chewing sugary gum. He recommended not chewing gum at all.

But otherwise, I agree with the sentiment.