1/6/21 insurrection post mortem: How did it happen? What could/should have been done? What should be the response?

It just boggles my mind that the rioters were allowed to get as far as they did. It will be interesting to know who felt the precautions were sufficient, and how the initial contact transpired such that the barricades were breached. The disparity between security yesterday and the BLM protests is awfully stark.

I also can’t imagine why there were only 13 arrests. If these folk were not arrested when they were in one place, presumably unarmed, how realistically is it to pursue them once they disperse? And if these folk do not bear some repercussions, how can the government ever arrest any protestors in the future?

What was the point of calling out the Nat’l Guard so late? It seemed they appeared when things were pretty much calmed down. Were they basically intended to enforce the curfew? BTW - how could it be a curfew when there was still so much traffic on the streets?

Then there are the political repercussions. A lot of talk was made about Trump, Cruz, etc having “blood on their hands”, but will they be treated as pariahs? Or will this enhance their standing among their base?

I’m truly not trying to advance any particular political agenda - tho I AM disgusted with the perpetrators and instigators. Just trying to make sense of something I never thought I’d see.

Some of the Capitol Police appear to have been taking selfies with the insurrectionists. Hopefully there will be a deep scrub of that organization to ensure that there are no officers who aided or tolerated the attempted insurrection, and any that are found are prosecuted.

The insufficient security was just another case of someone underestimating Trump. The Capitol Police routinely manages crowds of protestors larger than the one they encountered yesterday. But this is the first crowd incited by a man who exercises no caution when he speaks and who at this time is effectively above the law while at the same time feeling that he has nothing to lose.

Is the law under which the Chicago 8 were tried still on the books. That would be a neat piece of symmetry.

I predict a pardon of everyone involved, before Trump leaves office.

The mood and tone of the protest (sic) seems to have changed, so the time stamp on interactions with officers is a consideration.

I was reading over 50 arrests last night; I assume more are to come.

I’d like to know how we went from an armed detail inside the chamber to insurrectionists overrunning the chamber.

I’d like to know what officers were doing while a gallows was being erected.

I’d like to know why people breaching a security barrier and climbing up the side of the building and smashing windows weren’t shot.

Most law enforcement policies and laws prohibit the use of deadly force unless there is an imminent threat of death or serious bodily injury. Unarmed people climbing walls and breaking windows doesn’t really meet that standard.

Most law enforcement policies and laws prohibit the use of deadly force unless there is an imminent threat of death or serious bodily injury. Unarmed people climbing walls and breaking windows doesn’t really meet that standard. -

You mean like passing a counterfeit bill or holding a cell phone?

And yet, if you’re white, you get to chase the police. 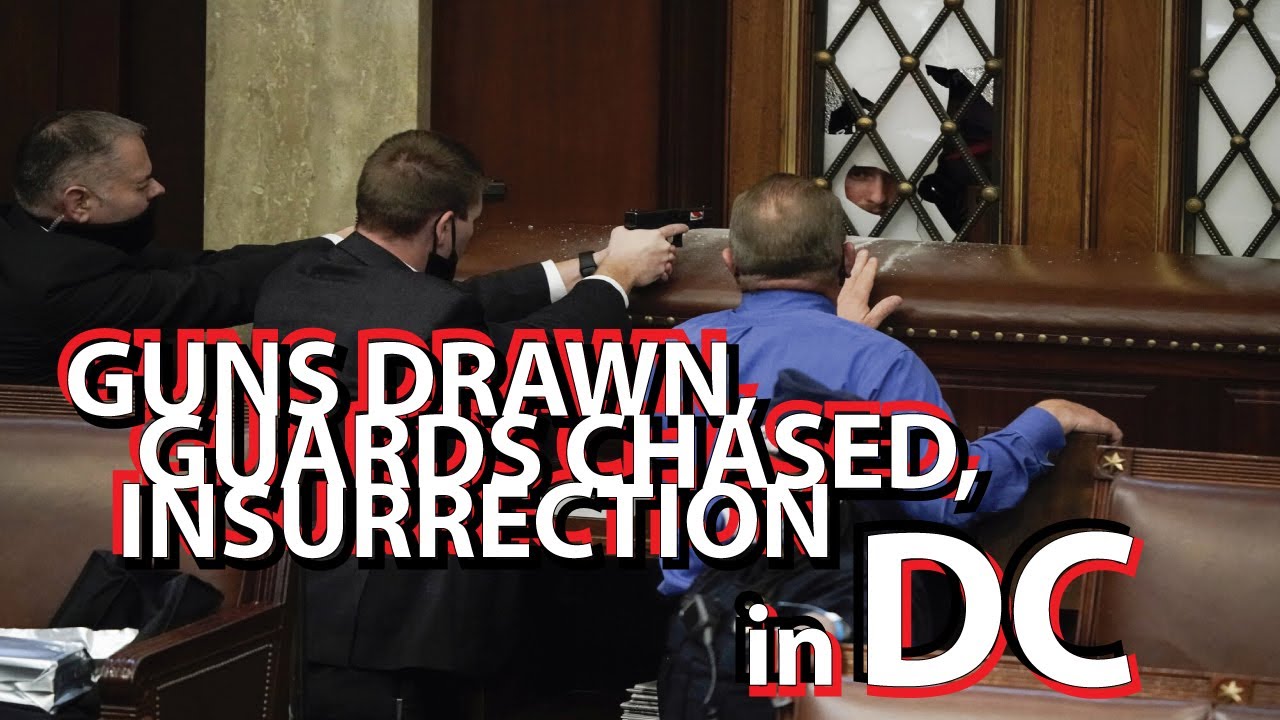 A White woman, a veteran, was shot and killed by the police.

Yes, most, this is one of the exceptions to that ‘rule’.

I’d like to know how we went from an armed detail inside the chamber to insurrectionists overrunning the chamber.

The armed detail was probably tasked with evacuating the chamber and getting the lawmakers to safety.

A White woman, a veteran, was shot and killed by the police.

What do you think the repercussions ought to be for breaking into the capitol and trying to force your way into the chamber while business is being conducted?

A White woman, a veteran, was shot and killed by the police. -

Who should never have gotten in the building, let alone far enough to directly threaten members of Congress.
Plus, I’m sure the security detail is far more capable than the average beat cop.

You mean like passing a counterfeit bill or holding a cell phone?

I think you’re forgetting the despotic, genocidal act of selling individual cigarettes on a city street.

They were not prepared to deal with what happened yesterday – it happens. We can argue that it shouldn’t have, but I see how they might have assumed they went from thinking “Meh, okay, protest” to “Hmm, that’s kind of a rowdy protest,” to “Holy shit, they’re breaching the front entrance!”

People make mistakes in real time and a situation like that gets away from them. Once it did, they’re now confronting with a fluid situation in which they have to find people in a very large building complex with lots of nooks and crannies, as well as trying to stop a relentless influx of new rioters.

I saw what happened at the Michigan state Capitol. I would hope they saw it too, y’know … since it was their job and everything.

If there is a positive, it would be for this to emphasize and demand attention to racial inequities in policing (not that additional evidence was really needed!)

I’m thinking about when my family went to DC after 9/11. As I was going through extreme security at the Wash Monument (already had jacket off/pockets empty/through magnetometer/about to be frisked), I had the temerity to politely ask, “What are we being searched for?” A HUGE armed cop of some sort got right in my face and loudly said, “Do you want to go to jail?” That kinda experience makes it hard to imagine how yesterday was allowed.

The 9/11 attacks happened over 19 years ago. That was plenty of time for Congress to install unbreachable physical barriers against terrorist attack.

it should be noted that we have photographic evidence of a man open carrying a firearm and a guy with a spear inside the Capitol building.

The police were on the side of the terrorists. They let them in, gave them free rein, and took selfies with them. As far as I’m concerned there should be a line of gallows poles along Pennsylvania Avenue with the traitorous insurrectionists hanging pour les encourager des autres.