So we have a memorable Super Bowl in the books. All the Head Coaching and GM vacancies have been filled. The league managed, one way or another, to navigate the COVID crisis and complete the season with only moderate disruption. Time to settle in for the long, cold, dark offseason.

The central narrative for this offseason will unquestionably be all about Quarterbacks. Specifically about the movement that is expected from some of the biggest names. Let’s start with a few known quantities so far.

Those 3 moves are pretty interesting in and of themselves. The Goff for Stafford deal is super interesting when you factor in the draft picks, the Goff contract, the Lions apparent appeasement of Stafford, the Cabo story and the various relationships between the Rams and Lions management. Philip Rivers has had a hell of a career and probably is in the discussion of greatest QBs to never win a Super Bowl but he’s been really overshadowed this offseason by all the craziness and the other QB rumors.

About those rumors, let’s take a look. It’s a long list:

Honestly, you can count the number of teams without a question at QB on one hand. Sure, many of the above rumors will amount to nothing and a few of the teams who would want to upgrade the position won’t find a match and will run it back. This year’s draft might be the most loaded QB class in a decade, at least in terms of quantity if not quality, and will certainly have an impact on these rumors.

Long story short, I’ve never seen anything like it.

While at this point nothing would surprise me, I get the feeling that the Lions are all-in with Goff for the immediate future. Goff IMO is a more than serviceable quarterback who had the misfortune of playing for a coach who runs a system perfect for a Stafford-type quarterback who can make things happen when plays fall apart.

Mel Kiper and others are still having the Lions take a QB at 7 this year in their mocks, but I wouldn’t be surprised if they ride Goff out for the next two seasons and not take a QB at all this year (IIRC he’s signed for 4 more years, but the Lions can cut bait without a cap penalty after 2).

The Lions have so many holes to fill but the most important fixes are on the defensive side of the ball this year. Under Patricia, their front four couldn’t pressure quarterbacks to save their lives, extending plays and exposing holes in the secondary. There are college teams with a better linebacking corps than Detroit. Holes abound everywhere. On top of that, there’s no depth.

Should Micah Parsons be available at 7 still, I can see the Lions skipping QB altogether and drafting a prototype franchise linebacker. But then again, if they trade Goff for more picks and draft Justin Fields at 7 or even trade picks to move up further, like I said nothing would surprise me.

That strategy makes sense and it’s not like the Lions are a player away, but if the Lions find a team with an interest in Goff, would they really turn down an offer for him? Finding a team willing to part with resources for him seems like a tall order though.

nothing would surprise me.

The only thing that would surprise me is the Lions actually becoming good under the current ownership.

That strategy makes sense and it’s not like the Lions are a player away, but if the Lions find a team with an interest in Goff, would they really turn down an offer for him?

Aye, there’s the rub. The Rams gave up a second first round pick just to get out of that contract. Even with the crazy QB market this year, I don’t envision suitors lining up around the block to take that contract on.

The only thing that would surprise me is the Lions actually becoming good under the current ownership.

I’ve been of the opinion for at least 25 years that the Lions are cursed for as long as the Fords own the team. Remember, old man Ford bought the team the day JFK was assassinated.

Russell Wilson could be on the trading block, which is one of the craziest rumors on this list.

That comes up all the time. I still remember when everyone was 100% sure he was being traded to the Giants.

Oh, the Drew thing is more than just a rumor. He himself said he’s not sure, bit won’t deny it. And he’s making moves that look like preparations to retire. 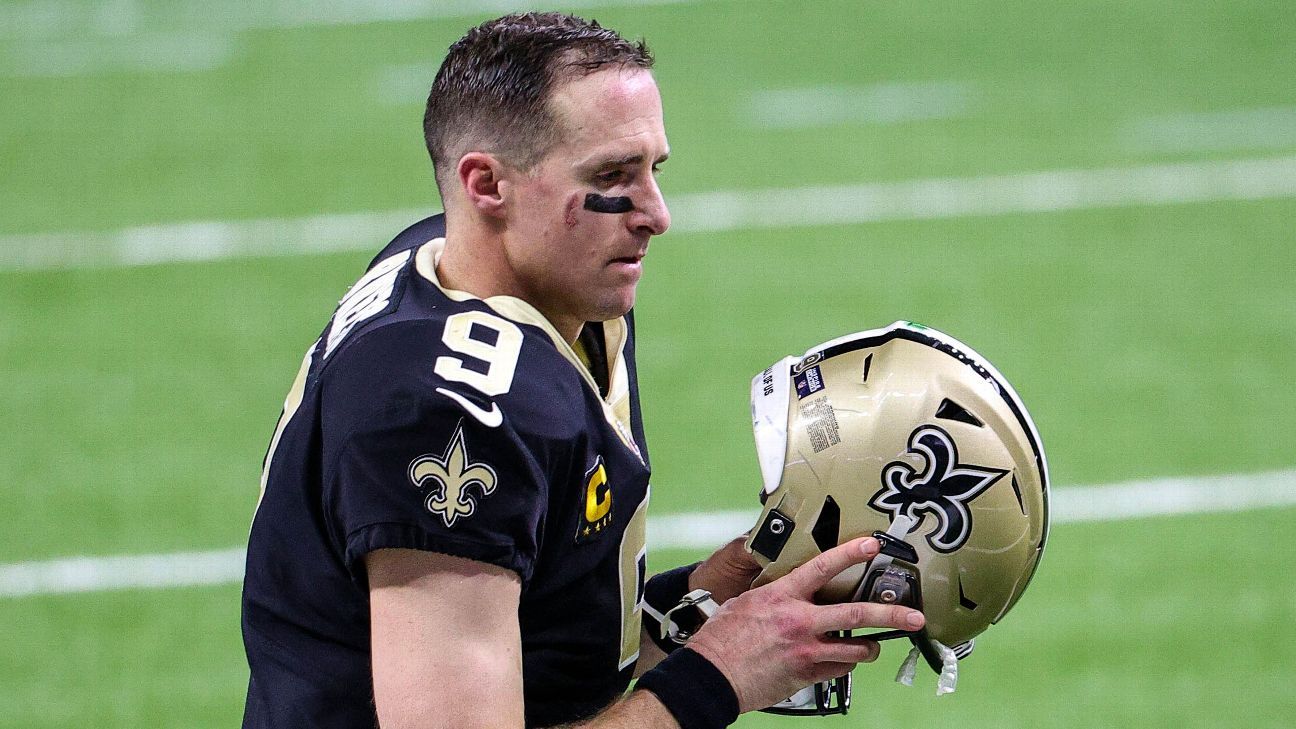 Source: Brees to cut salary in sign of retirement

In the latest sign that Drew Brees is preparing to retire, the Saints quarterback has agreed to reduce his 2021 salary, a source confirmed to ESPN.

One QB question that I forgot to include, and it has relevance to the Lions/Goff discussion. Apparently the Lions chose the Rams offer which included Goff over a comparable deal from the Panthers that would have included Bridgewater. The Broncos apparently also offered Drew Lock plus a 1st.

So, assuming those reports are true, this means that the Lions preferred Goff over both Bridgewater and Lock. And probably not by a little bit since the Rams included 2 future 1sts instead a top-10 first this year in the Panthers and Broncos case.

If I could have gotten Lock on a rookie deal plus this years ninth pick and a potential sweetener for Stafford I’d prefer that deal over what the Rams offered. BUT, if Stafford privately told them he wanted to be in LA that might have been the deciding factor.

This also means that the Panthers clearly belong on this list of teams looking for an alternative at QB. Which was entirely predictable…the idea that Bridgewater was a quality QB candidate was laughable last offseason, yet most idiotic Bears fans wanted to give him a fat deal.

Apparently the Washington Post has changed its headline on Marty Schottenheimer’s obit in response to criticism for insensitivity/taking a cheap schott.

The original headline read: “Marty Schottenheimer, NFL coach whose teams wilted in the postseason, dies at 77”

That goes in the pantheon of classy obit headlines along with the N.Y. Times obit notice for a famous New York Giants baseball player:

I agree, the Cam experiment was a pretty clear failure and the Pats can’t be thrilled by what they saw (or rather didn’t see) out of Jared Stidham. Getting Garoppolo back in the fold would likely mean less of a learning curve since he presumably can pick up the system again fairly quickly. Bringing in solid vets instead of superstars tends to be their MO anyway. I think I heard the Pats of plenty of cap space, but I wonder what SF is looking for in a trade?

For Washington, I think everyone wants Smith to retire. It was a great story and far more memorable than Haskins being an ass clown. But it’s over.

Heinicke did look good in the game against Tampa, but it’s one game and there’s film on him now. Maybe he’s a new Kurt Warner but also could just be a flash in the pan.

They need to see what happens with Kyle Allen’s injury rehab. It definitely wasn’t pretty. Allen was serviceable and knows Rivera. If I had to guess, he’s the starter in week one.

Obviously there will be Cam reunion rumors. Haskins is gone so that would help, his presence pretty much ruled out Cam coming to D.C. But, I think Washington passes on him, they don’t want to deal with the diva stuff.

The Texans are a mess. 3 of their best players wanting out of there in the last year.

There’s already a lot of Packers fans who want the Pack to go after Watt – he’s from suburban Milwaukee, and went to the University of Wisconsin. Injuries have clearly taken their toll on him, and I’m not sure that defensive line is the Packers’ biggest need, but it’d definitely be a sentimental choice.

Yeah the texans dumpster fire is pretty much at the point of let it burn out and start again. Watt said he didn’t have enough career time left to go through a rebuild with them.

Another one left out of the OP is Ben Roethlisberger.

Seems like at this point both he and the team expect him to play for the Steelers in 2021, but will require some contract adjustments lest he be a $41M cap hit, which seems untenable given the other free agent situations the team needs to address.

Is he still capable of playing at an elite level? If so, not the Bears. Is he still at least capable of being a productive defender who can make impact plays? If so, still not the Bears. Have injuries and age and wear and tear finally caught up to him, to the point where he’s a shell of his former self? If so, then the Bears, who will bid against themselves to give him a huge contract that will be structured in a way that makes him impossible to trade and more costly to cut than to keep him while eating up so much cap space that it will cripple the franchise’s ability to sign actual impact players. [/rant]

Carson Wentz is expected to the next guy to get traded, rumored to be the Bears or Colts, both fan bases are outraged at the suggestion.

It’s sounding more and more like the Bears never made a serious offer and most of the rumors were coming out of Philadelphia to drive up the price, thankfully. Unless we can somehow get Watson, I’d rather take a flyer on the draft.

Have injuries and age and wear and tear finally caught up to him, to the point where he’s a shell of his former self?

Most likely. I don’t think he’s awful but he’s a far cry from the player who many consider to be the best overall player in the history of the Texans franchise. Still, a shell of JJ Watt is not a bad player (if injuries let him play).

Another one left out of the OP is Ben Roethlisberger.

Seems like at this point both he and the team expect him to play for the Steelers in 2021, but will require some contract adjustments lest he be a $41M cap hit, which seems untenable given the other free agent situations the team needs to address.

This is correct., I actually considered adding him but chose not to simply because I hadn’t actually read any rumors about him. Still, he wasn’t great last year and his contract is an albatross. But much like Rodgers, it would be pretty surprising if he weren’t at least starting the year for Pittsburgh.

I was noodling on the JJ Watt thing while sitting in the barber’s chair this afternoon. I was thinking Tampa is probably the one where I’d place my chips. Shaq Barrett has said that he’s looking to cash in big this offseason, which I suspect means it won’t be in Tampa. There’s a hole opening up on end and JJ would probably accept a modest deal to chase a ring. Kansas City might be a candidate for similar reasons. I admin, that probably doesn’t rule out Green Bay either with the whole home town thing.