"6-year-old couldn’t play soccer because of ‘culturally biased’ hair rules" youth soccer coaches how would this play out in your league? 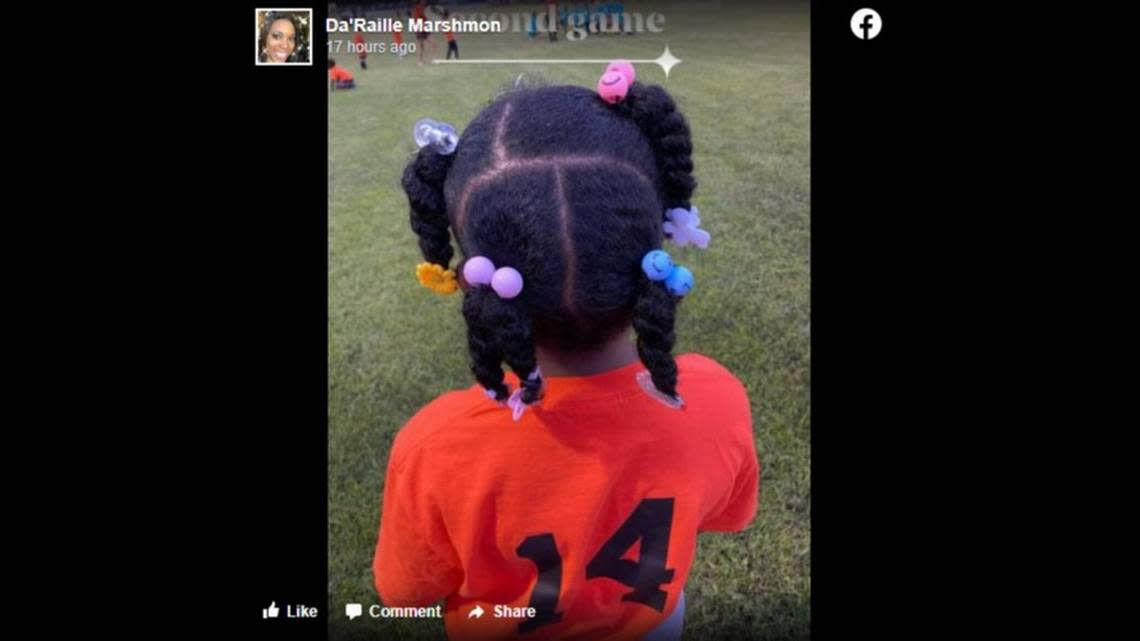 Officials reportedly told the girl she had to remove her hair clips. “Those hair clips are her personal appearance that she has worn her entire life,” her mom said.

How would/could you handle this?

It would appear that 2 of them could be impacted if the girl attempted to head the ball and I may see a concern based on that if it could cause injury, but the reason that was given was they are a distraction which does not fly.

OK, I have coached kids for over 30 years and refereed for nearly that long, so as a voice of experience, I would state (based on AYSO-American Youth Soccer Organization) that:

What would I have done? I’d probably have asked for the balls and the stuff at the end of the hair be removed, but let the items at the top go…truth is, I don’t know what I would have done if confronted by this; it would depend if I felt it was safe for the child and for the other children or not. And that is a subjective call.

Was the referee being racist/biased? Were the rules? I don’t know, can’t know from the information available, but the rules…

…which state that jewelry, watches, rings, necklaces, earrings, hair beads and “headwearof any type” can’t be worn during a game.

…sound a lot like any recreational soccer league I’ve been associated with. Again, the interest is to protect the kids.

Not sure if this has helped much, the league I am associated with doesn’t have referees for 8U and below. Sounds like it could have been handled better, though.

Sorry but I’m not sympathetic on this one. If it’s a safety hazard then she should have to take the pins out. And if she or her mother refuses, then she shouldn’t play. It’s not a big sacrifice to ask.

As a soccer ref since high school, she doesn’t have to take them out, but she can’t play with them in, due to the danger to herself and others.

I played soccer on-and-off as a kid through high school. Getting hit in the head by the ball (or a cleat, that happened to be more than once) is bad enough without the potential of having a spike driven into your head.

In every league I’ve ever played in you have to remove all jewellery and cosmetic equipment and there are rules about the equipment that can be worn.

It is a safety rule and with good reason.

Her parents need to decide if their cosmetic preferences are more important than the safety of the players or their child’s enjoyment of sport.

I am not a soccer coach - but I’m pretty sure the clips/ponytail holder/hairstyle aren’t the real issue. While the rule only specifically prohibits hairbeads and headwear, and these hair accessories aren’t either, it’s also true that the basic style could be achieved with elastic ponytail holders without the hard balls and clips , and those accessories could be added when not on the soccer field. It seems from the Facebook post linked in the article that no one had a problem with the hair accessories in the first game and I’m really wondering why no one said anything after the first game if it was a safety issue. (and it appears that no one did, if only because if someone had, the parents would have complained sooner)

The mom seems determined to be upset. She seems to ignore that there is or could be a safety issue.

She wouldn’t be allowed to wear those when playing in my kids’ leagues either, not at any age. My kids had refs at 8U, I believe, and they wouldn’t allow it.

That hairstyle doesn’t seem especially Black to me – little girls of all stripes put clips, barrettes, and elastic bands with little plastic balls at the end.

I know nothing about hair clips or 6-year-olds, but I do know that the brand of soccer played by 6-year-olds is what my FIL, who coached soccer at many levels for most of his life before he passed, referred to as “bunch ball.” Because they are so young, most of them have little to no understanding of the “big picture” of the game, and they all just crowd around the ball. Given that reality, I would have to agree with the removal of the clips, but not for the BS “distraction” reason they gave.

It seems from the Facebook post linked in the article that no one had a problem with the hair accessories in the first game and I’m really wondering why no one said anything after the first game if it was a safety issue.

Because no one seemed to think it was until after the fact. As people have noted, and the article said, they weren’t asked to take the hair clips out due to safety, but:

“She came over to my husband confused as in what they meant,” Marshmon said. “My husband asked what needed to be removed (and) the volunteer said her hair is a distraction.”

Seems obviously racially biased by the volunteer to me. I think afterwards they realized they needed to say something else about it.

If the family was come up to before the first game and told, hey this is a safety issue, I think it wouldn’t have been an incident at all. The “distraction” thing is what made this an issue.

and “headwearof any type” can’t be worn during a game.

Would a child from a religious family really be forbidden to wear a simple cloth head covering?

Sorry but I’m not sympathetic on this one. If it’s a safety hazard then she should have to take the pins out. And if she or her mother refuses, then she shouldn’t play. It’s not a big sacrifice to ask.

I’m a little sympathetic here. Given the long history of discrimination against African Americans, especially girls and women, as it relates to how they wear their hair, I think this hits on a raw nerve for a lot of people. It’s not that I think the parents are necessarily in the right on this, but I can see why they’re so defensive about what they perceive as an arbitrary rule to the detriment of their daughter.

It seems like common sense that hard plastic objects could exacerbate the damage caused by a flying ball or a shoe to the head during competition so on the face of it I don’t find the rule to be unreasonable. And as the rule doesn’t actually prevent any athlete from wearing their hair in whatever style they wish it doesn’t seem discriminatory at a cursory exam. However I do wonder if the rule might be enforced in an arbitrary manner.

Would a child from a religious family really be forbidden to wear a simple cloth head covering?

Probably not, as long as there are no loose ends that might poke another player in the eye. The concern is the safety of all the players.

That makes sense. The rule you quoted just seemed to be overkill for the safety scenario.

So, when I first read the story and looked at her hair, to me it looked racially biased to me. That’s a really common way for little black girls to wear their hair and it isn’t as common for non-black girls (I rarely if ever see two strand twists white girls of that age). So at first glance, it seems targeted at black girls.

The hard ball elastics are not just aesthetics, they’re also far less damaging to hair than circular elastics; same with the barrettes. It’s unlikely that the girl’s parent(s) have the right sizes (they’d need multiple sizes) of elastics on them. And even if they did - that’s not a quick job to take it out and put it back up. If this is a problem, it’s one that needs to be clearly outlined well in advance of a kid showing up to the game.

From the article cited:

An official reportedly approached the 6-year-old and told her she had to take her hair down.

“She came over to my husband confused as in what they meant,” Marshmon said. “My husband asked what needed to be removed (and) the volunteer said her hair is a distraction.”

Marshmon said her daughter was wearing elastic ponytail holders and plastic clips at the time. Her husband asked which ones needed to be removed, but no one clarified, she said.

– that doesn’t read like a safety issue to me; neither the “take her hair down” part nor the “distraction” part.

And that doesn’t look remotely like a hairstyle that can be “taken down” in a couple of minutes and put back together that fast.

If there genuinely is a safety issue, that ought to be clarified with parents well before the game; as well as what alternatives are acceptable (would ribbons work? I have no idea.)

If there genuinely is a safety issue, that ought to be clarified with parents well before the game; as well as what alternatives are acceptable (would ribbons work? I have no idea.)

That’s the kind of stuff that should be on the coach, as the first time the referee is going to see the kid is when they step on the field for that game. Unfortunately, at the 8U age, a lot of coaches are just parents who are willing to volunteer their time and don’t know more than the most basic of rules.

I had plenty of times as an official that I stepped onto a field and had to tell a player that they can’t play without changing their gear. But I would have had no way to tell them not to wear earrings ahead of time. (If I had a dollar for everytime someone told me they just got pierced and can’t take them out, I’d have a couple of game fees in my pocket. Stock answer: “You don’t have to take them out, but you still can’t play with them in.”)

As a coach (middle school jv basketball - some kids first exposure to organized play), I try to make sure my players know that they can’t wear jewelry in game and that some of their extra equipment (undershirts, tights, shooting sleeves) has to meet certain requirements by rule to be legal (match uniform color, which is difficult when wearing reversible jersies and changing between games). The refs are sometimes lenient on the fashion rules, but never on the safety ones.