Apparently my little sister is determined to become a teenage mom

His unlinked cites aren’t much, not even when you look closely. It’s the exact same thing as the urban myth of the welfare queen.

If she wants unconditional love, she should get a dog, or better yet, a goldfish.

An infant, and even a 10yo, is better described as an unconditional obligation. One with considerable rewards, but a vast obligation nonetheless. As this current thread explains:

What are things that non-parents cannot understand? In My Humble Opinion (IMHO)

As a single person in my 30s with no kids, I’ve heard or seen comments quite few times to the effect of “You don’t understand (this or that) until you have kids yourself.” Or, a non-parent simply cannot understand what it is like to be a parent. Etc. So…for parent Dopers…what are these things? I’m sure it’s not usually a reference to practical things (i.e., most non-parents know perfectly well not to let a kid play unsupervised with a loaded handgun or leave kids in a hot car, while even some p…

Well, she already has a cat, two guinea pigs, a hamster, and various assortment of fish.

Does Sis tend to her pets, or is Mom also feeding then and cleaning cat boxes, critter cages, and fish tanks?

She does seems to tend to her pets, though her room is quite a mess.

I really wish more schools did the Mom & Dad training that was once popular for 14-ish year olds. Issue them a 5# (should be 10#) bag of sugar and have the kids carry it with them everywhere they go, pretending it’s a baby, “feeding” and “changing” it on a schedule, etc. A couple weeks of that disabused a lot of kids of how much unalloyed fun being a Mom or Dad would be.

In school my daughter had a class (health?) where they were each given a doll to care for. It was set up to need fed/handled/changed periodically and would track how well the “mom” did.

My daughter has zero pregnancies afaik.

A “smart” doll is even better. In your/my ancient era those would have been expensive / difficult. Nowadays or even 15 years ago they’d be trivial & cheap.

Forcing the kids to pair off and having “Dad” take his turn caring for the thing would be an important part of doing the job right.

My aunt had a toddler as well as this newborn. Quite frankly, I don’t remember much of the weekend, because I tried to show up for all the middle-of-the night baby needs. I do remember stumbling around in a stupor, standing uselessly next to my aunt while she efficiently fed one end and cleaned the other end of the squalling baby.

During daylight hours, I’d be zonked in the living room, while she tended to the running of her household.

At the end of the weekend, she thanked me profusely for my “help.”

(1) EVERY young girl needs to find an aunt with a newborn, and then she needs to spend a weekend “helping out.” The young girl needs to get up for every single middle-of-the-night event. Bonus points if one event includes puking with sheet and nightwear changes.

I’ve never watched any of them but my understanding is that the teenage motherhood TV programs do a pretty good job of showing how hard it is. Maybe sis should watch a few of them, although if she expects mom to take care of the baby it won’t matter.

One thing the teen mom programs show is the dramatic effect pregnancy has on the new mommy’s body. There is no way this young girl will be able to turn over the entire pregnany to the prospective grandmother.

The mood swings are another fun ride!

She has no idea what she’s in for. Tell her to hang out in new parenting subreddits for a month and see how she feels. After the twentieth vaginal tearing/incontinence/cracked and bleeding nipples post maybe she’ll think twice.

I remember a study from a few years back that showed the students caring for the robot babies actually ended up having significantly more pregnancies and abortions than the control group that only received the classroom portion of the class. No speculation over why, just a conclusion that they didn’t have the desired effect on the students.

Fascinating if true. I was running from anecdote myself.

In discussing how difficult motherhood or parenthood is, clearly there’s a ghastly baptism by fire in those first weeks of babby not sleeping, babby not communicating except in horrible wails, and babby having noxious stuff dribbling pretty continuously out of every orifice, even the ones that are supposed to be entrances, not exits.

But ISTM the real burden of parenthood is not the X months of sleep-deprived nights and sore nipples or worse. The real burden kicks in after then when you finally sleep enough to break the cycle of chronic deprivation and you suddenly figure out this sentence runs another 20-ish years and there’s no parole. Yes, the details change as between tending a 2-month old, a 2yo, and a 12yo. But it ain’t really over until they successfully move out.

But it ain’t really over until they successfully move out.

Cute that it’s thought that the worry ends then.

I never said anything about worry. The work (mostly) ends then. Notice I also hedged my bets with “successful”. Failure to launch is a thing. 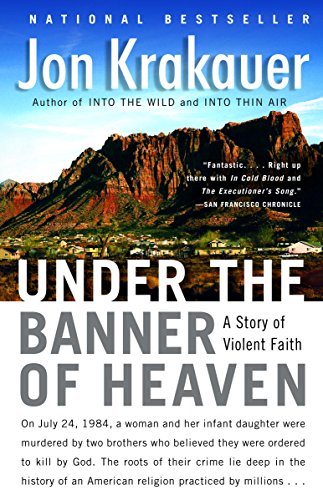 Under the Banner of Heaven: A Story of Violent Faith - Kindle edition by...

Under the Banner of Heaven: A Story of Violent Faith - Kindle edition by Krakauer, Jon. Download it once and read it on your Kindle device, PC, phones or tablets. Use features like bookmarks, note taking and highlighting while reading Under the...

But it ain’t really over until they successfully move out.

The first night after my kid moved out, I went to bed at ten. I didn’t have to text him after midnight to see where he was (and get a text like “Mugged. In a gutter. Home when I recover.”), then stay half awake til he rolled in.

I slept like a baby that night… (but that was after 18 years of sleep deprivation…).

I didn’t have to text him after midnight to see where he was (and get a text like “Mugged. In a gutter. Home when I recover.”)

Between your Mom threatening to feed childhood you and your little sister to the troll bridge and 30+ years later your kid(s) having that sick sense of humor, all I gotta says is … you got it rough man! They comin’ atcha from both ends.