Don’t blame me, I’m semi-quoting the title of an article in today’s Boston Globe (which is particularly strong today in SDMB-worthy articles):

TV Land wants to put a statue of Elizabeth Montgomery as Samantha Stevens, riding a broomstick, at the corner of Essex and Washington in Salem, Massachusetts. People are freaked out because they think it trivializes the historic events (and the series was set in Connecticut, anyway).

Of course, you can buy T-shirts with the cartoon image of Samantha at the souvenir shops in town (as well as lunchboxes and other such kitsch), and there’s a “Samantha’s Consignment Shop” in town that’s trading on the image, not to mention all the “Witch City” references. The Salem Evening News has (or at least untril recently had) a silhouette of a witch on a broomstick on its masthead.

Salem has come to grips with its past, recognizing that what happened back in 1692 was a tragedy that resulted in 19 deaths and much misery. On the tercentenary they erected a monument (actually, more of a mini-park) to the 18 hanged and 1 pressed witch. The proposed Bewitched statue is supposed to be well away from this memorial and other pertinent historical sites.

I’m ambivalent about it. While you shouldn’t forget the historical tragedy, witches are fun, and bring in lots of tourist dollars and keeps Salem interesting. People should be interested in Salem’s past as a seaport to rival Boston, and come gawk at the newly refurbished and enlarged Peabody-Essex Museum, but of course, they won’t. If they want their supernatural jollies they should consider that H.P. Lovecraft (and others) set many horror stories in thinly-disguised versions of Salem and nearby towns, but TV Land isn’t going to put up a statue of Cthulhu here.

Pepper Mill doesn’t like the idea. Among other reasons, she;s related to Rebecca Nurse, one of the 19 memorialized at the mini-park.

…but TV Land isn’t going to put up a statue of Cthulhu here.

We should start a fund for this worthy purpose.

TV Land isn’t going to put up a statue of Cthulhu here.

Well, maybe they could if they’d ever rerun the rarely seen 1950s sitcom I Married Cthulhu, starring Eddie Cantor and Ethel Merman.

Awhile back, TV Land decided to place an Andy Griffith statue in Pullen Park in Raleigh, NC. The statue was vandalized two or three times; I think it has been moved, but I’m not sure where it went.

No, you’re thinking of the sitcom I Love Cthulhu, and it was Desi Arnaz with his Cuban-accented “Oh, Cthulhu, I’m Home!” as he brought in Special Guest Star Caesar Romero.

I really miss the original animated opening with the stick-figure Ricky and Cthulhu.

Are you sure you’re not thinking of My Three Cthulus? You know, with Fred McMurray as the father and Yog-Soggoth as the kindly uncle?

I seem to recall the life lessons learned from Leave It To Cthulhu, where kindly Miskatonic University professors Ward and June, their son Wal’lyeh, and that lovable, crazy Cthulhu were always having wacky hijinx ensue.

I seem to recall the life lessons learned from Leave It To Cthulhu . . .

*Nyarlathotep enjoys a minuet,
And virgin blood in a crepe suzette,
But Azatoth loves to rock and roll,
Dark rituals make him lose control,
What a wild duet!

They’re Old Ones!
Identical horrors beyond compare!
They walk alike, they talk alike,
They’ll even take your soul alike!

You will lose your mind,
When Old Ones… are two of a kiiiiiiind!*

“G’night everybody! Thanks for watching, and remember! Ia! Ia! Cthulhu fthagn!”

Will we be able to look up her skirt?

Will we be able to look up her skirt?

. . . and find out if it’s true what they say about witches?

Well, on the bright side, at least it isn’t Nicole Kidman. (They must have figured out that she would frighten too many children.)

No, you’re thinking of the sitcom I Love Cthulhu, and it was Desi Arnaz with his Cuban-accented “Oh, Cthulhu, I’m Home!” as he brought in Special Guest Star Caesar Romero.

Well, on the bright side, at least it isn’t Nicole Kidman. (They must have figured out that she would frighten too many children.)

And she’s an Aussie

. . . and find out if it’s true what they say about witches?

That they weigh the same as ducks?

I’ve been wondering about this one, too. How about it, Eve? You got me curious.
On another note, this statue will finally enable us to experimentally measure the meaning of the expression “Cold as Witch’s Tit in a Brass Bra.”
I’ve noted that you can tell which parts of a statue get felt more often than others by how well-polished they are. Toes, noses, horns on animals all get very well-polished, something the folks at roadsideamerica.com call “burnishing”. The bust of an African woman that used to stand outside Akeley Hall in the American Museum of Natural History used to have her bare breasts very well polished, but they removed her. (sniff!) I notice that the Dolly Parton statue in her home town in Tennessee has been cleverly designed to keep you from doing this. But if the put up a statue of Elizabeth Montgomery in her “Bewitched” pose, they’ll have her breasts in perfect display. Given the existence of the expression I quote above, I guarantee that she’ll have well-polished boobs. I wonder if they thought about that.

A picture of the Dolly Parton statue in her birthplace, Sevierville, Tennessee. Note strategically placed guitar: 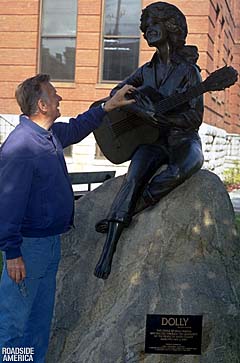 I saw the daughter of “official Salem witch” Laurie Cabot on MSNBC Scarborough Country last night. I forget his first name. A few years ago, Laurie had a meltdown which caused a bunch of Wiccan leaders to distance themselves from her. Anyway, apparently, the daughter, I think speaking for her Mom. thinks the whole thing is demeaning to Wiccans. But what struck me was what a wi-otch the daughter was- a smartass rude wi-otch.