“Big Brother” returns to CBS on June 26th. Though I’ll hate myself for indulging, there goes three hours a week of my precious time. A couple of ‘twists’ have been announced here: 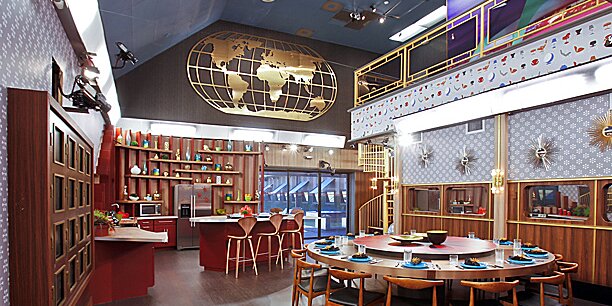 If you want to wait for Julie Chen to breathlessly reveal this stuff as if it were the most exciting and important news since the splitting of the atom, don’t click on the link.

I’ve always wondered… do they have people that come in and clean the house during the game? Or is the the guests’ responsibility?

Bump since it starts tonight.

McRae reminds me of some weird love child of Marty Feldman and Count Floyd.

I liked the role of Nick better when it was being played by Christian Bale with a chainsaw and a closet full of shrinkwrapped corpses.

I’ve always wondered… do they have people that come in and clean the house during the game? Or is the the guests’ responsibility?

It’s the guests’ responsibility for all cleaning.

But this year, BBAD is on TV Guide Channel, and that is part of my satellite package. I decided to watch last night.

If the first 30 minutes is any indication, how to people watch the live feeds? It was so boring! At least it put me to sleep

Maybe it is because I don’t know all the people yet and I will probably give it more chances.

Regional Tornado warnings kept me from watching the 15 minutes or so. I think Pizza Boy won HoH but I didn’t get specifics on the twist.

From what I gathered on twitter, is that America votes for a weekly MVP and the MVP gets to make the third nomination? Can anyone confirm? Is there something else I am missing?

And yes, America votes for MVP and that person gets to nominate the third up for elimination. MVP is notified in the diary room, doesn’t need to tell anyone s/he is MVP. The third nommed person will be announced right before the veto comp so s/he can participate.

Hey, Julie Butfirst was actually there in person when the house guests entered the house. That’s different.

Is this the last prime time network show that is still broadcast in low-def? I guess CBS is too cheap to upgrade all those cameras in the house.

Opening montage of cast members pretending to be surprised when they “discovered” their key to the house fills me with the kind of rage and disgust I really need to power me through the hate-watching to come.

But then, I can actually feel some of my brain cells committing suicide as I’m watching these morons introduce themselves to each other in the house. I’m seriously doubting my resolve to devote three hours a week to this.

I was suprised they got rid of the “front porch” set, too. They’ve taken great pains to create the illusion that it’s actually a house for years now.

Opening montage of cast members pretending to be surprised when they “discovered” their key to the house fills me with the kind of rage and disgust I really need to power me through the hate-watching to come.

You mean they don’t know they are on the show already? Don’t these people have cameras on them all the time? As they open their desk drawer, or as they are unloading the dishwasher?

Now I am Jaded!

Just watched the last 15 minutes online that I missed last night due to the severe weather warnings.

OK, I like the twist. I think it will tend to make the players not “throw competitions” especially the veto competitions. And I really like the anonymity.

Speaking of the VETO, What happens if that third nomination gets pulled off the block with the VETO.

Will there be a replacement nominee? If so, I would assume the MVP gets to name that one as well.

Rachel’s sister was sniffed out kind of quickly. Of course Julie Chen planted the seed with the “Floaters, grab a life vest” comment.

Not happy with the BBAD move from Showtime2 (which I get) to TVGN (which I don’t.) Much less investment in the show for me this year, looks like.

Not really loving the cast. I like the blue-eyed blonde and the christian black guy, but other than those two I either didn’t care about or actively disliked the rest. The gay guy is just plain weird-looking, and McRae is clearly a baby-raping serial killer.

Regarding replacement nominees, that’s the HoH’s job regardless how the vetoed nominee got nominated.

My husband and I make a bet on BB each season. By the end of the first show, we each pick someone we think will last the longest. If the person we’ve chosen wins the whole season, the payoff is doubled.

The bet is a pretty big one – five dollars.

I don’t remember their names yet, but I chose the woman of color with the long hair.

I am amazed every year by the people I think I will like, but don’t later – and the people who give me the creeps at first who turn out to be adorable.

Who did your husband pick?

McCrae reminds me of the stereo-typical tortured poet who hangs around the coffee houses from the 1960’s who look for symbolism in the coffee stained napkins.

Is everybody else an not-invested this season as me?

Only watching broadcast, my take is that we’re in a two-way tie for world’s worst player between McCrae and Rachel’s sister.

Davis couldn’t be more of a loser if he tried. Get him out of the house so Aaryn can wake up and play the game. (She is painfully attractive. Me likey!)

This is definitely an interesting twist of 3 nominees, meaning you can’t guaranteed break up a strong pair. Hopefully this actually comes up at some point.

Is everybody else an not-invested this season as me?

Eh, I don’t like any season until at least the fourth or fifth week. Before that, there are too many people to keep track of and no decent strategies.

FWIW, both Aaryn and GinaMarie have been fired from their jobs as the result of racist and bigoted comments seen on the live feeds.

FWIW, both Aaryn and GinaMarie have been fired from their jobs as the result of racist and bigoted comments seen on the live feeds.

This got me curious so I went to read Aaryn’s thread at Hamstertime to see what happened. One of the very first comments, before the feeds started: “I hope she’s a racist so I can call her Aryan.”

I was suprised they got rid of the “front porch” set, too. They’ve taken great pains to create the illusion that it’s actually a house for years now.

Interestingly, in the (IMHO much better) UK version, they very openly show and tell the viewers that it’s filmed in one of the soundstages at Elstree Studios.

I’m watching! And while I wanted David gone, I must admit that Sunday after he was nominated was comedy gold for me. Listening to the conversations between he and Arynn had me convulsing in laughter- writers could not have come up with more idiotic and “ick” dialog than what the two of them came up with on their own.

I don’t know characters well enough yet, but if Jeremy keeps being a tool, I don’t see the Moving Company lasting the whole season (unless they move him out and move in the real estate girl; and maybe pick up one other chick).

McCrae cracks me up… especially with the other players so convinced he’s not a delivery guy.

Last night when the sound editor put in that ‘wah-chaka-chaka-wah’ guitar music over the footage of the couple laying in bed making out, I declared, after watching every season of “Big Brother”, that I was done. Life’s too short.