I don’t know if we should start a new Cyberpunk 2077 thread for comments on the game but I’ll go with this for now:

I started playing about two hours ago and I am still barely into the tutorial mission. Not because it is long (I have no idea yet) but because I am busy running around looking at stuff and reading backstory stuff on computer terminals and what not. That and I spent a lot of time in the character creation screen. None of that is necessary at all, that’s just me.

I have seen some minor graphical bugs. Nothing terrible or game breaking. Some refinement is lacking too. That this was made with consoles in mind is very apparent (I’m on PC) and as a member of the PC Master Race the game suffers for it. Not just the interface but the overall look of the game. Compromises had to be made and it shows. (FTR: I also have a PlayStation and it’s great too.)

When I first entered the Witcher 3 world my jaw dropped in awe. Not just at naked Yennefer but walking onto the balcony and seeing that vista. When running around and experiencing the wind and weather and the mood. The characters and their detail. All of that is missing here. It looks nice, make no mistake, but characters and animations are…eh. Not bad but not Witcher 3 (and I use Witcher 3 since same dev and it was made five years ago). There is a lot of detail but it’s missing some of the magic CDPR put in the Witcher 3.

Also, I can’t say I am a fan of the first-person perspective in this. I know CDPR said this was a very intentional choice to let you see the world more fully but then you lose almost all benefit from spending so much time customizing your character. There are a few times you see yourself but mostly you don’t (from minimal experience and what I have read). I LIKED seeing my character get upgraded with spiffy new armor and a shave. Here, you won’t see that. I’m not saying all first person perspective games are “wrong” (DOOM leaps to mind). I just think here, where we want to roleplay our character, it helps to see them.

Performance, so far, has been good. I have a very good PC and I certainly have not been very far yet so this could change but right now…banging along just great at pretty high settings. Of course, YMMV.

I have a loooooong way to go. This is just a first, first impression. Take it FWIW (read: not much).

Hey, so is combat like Fallout 3, NV, and 4? A first person shooter of sorts?

I’ve avoided most footage of the game, but it looks like that is what it is?

There is something about those first few minutes in a game that can be special and exciting…making you want to run into the world. Witcher 3 nailed that. This…well, I am in only one starting position (of three) and have not seen the others but…it doesn’t grab me in the same way. It is not bad at all…just not feeling that spark yet. It’s “competent”. But that may well change. I didn’t feel that “spark” when watching “Breaking Bad” or “The Expanse” or “Firefly” either but they were all a slow burn and were awesome as I got into them. I have a looong way to go yet in this game.

From what I have read from others it kinda starts out point-and-shoot lameness but becomes more interesting as new weapons and tech open up to you. New weapons are more than just more DPS and tougher enemies are more than bigger bullet sponges.

Make no mistake, I am enjoying myself so far. Happy to carry on further.

I’ve got the game downloaded and unlocked. Will be playing it later tonight.

For those of you a few hours in: how’s the non-lethal approach looking? The devs have said the game can be beat without killing anyone, and I’d like to give that a try. But I’m curious what it takes to accomplish that (it would kinda suck if that meant skipping big parts of the various questlines).

I’m trying the same thing but nowhere near being able to render any opinion. I may not be 100% non-lethal. I’m not above getting a defense turret to shoot its own guys.

We can compare notes later.

Cool–curious how it goes from there.

I play with… varying levels of non-lethality. When I’m really going for it, I prevent baddies from killing themselves by accident, and competing enemy groups from killing each other, and unconscious baddies from dying from trauma, and so on. But usually I’m not quite that rigorous.

I would just create a new thread for discussing the game. Having a long running thread turn into a different kind of thread usually stifles discussion/keeps away new traffic to some degree. Some people come here because want to talk about Cyberpunk, but they don’t know if they have to wade through 70 or 200 posts to get to the actual content and just don’t bother.

Is there a way to summon the mods and have them peel off these last few posts into a new post? Is it possible? If it is would they do it?

(really asking…dunno if there is a procedure)

Here is an example (not a spoiler): 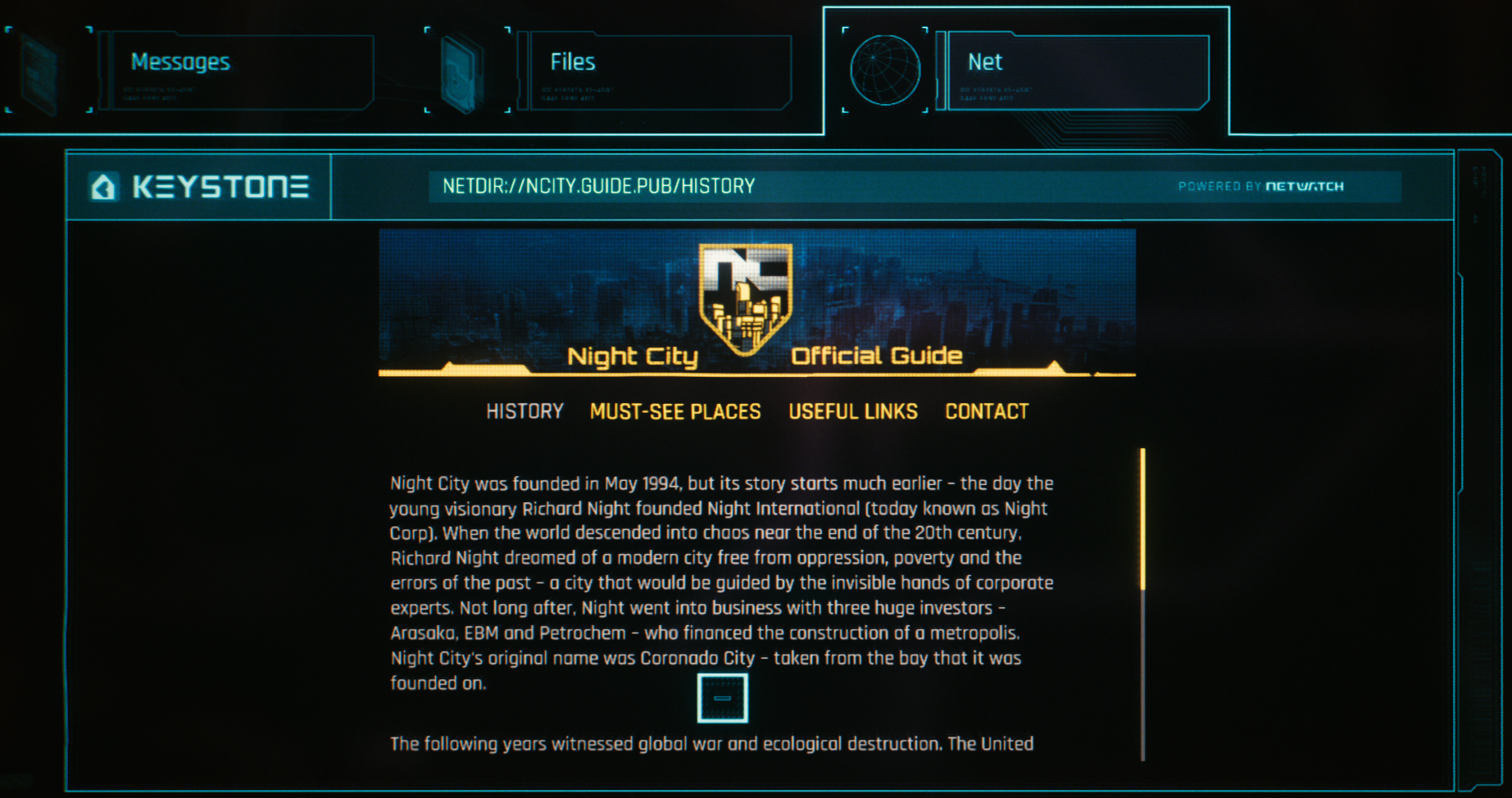 Is that mess intentional? Is this cyberpunk world with super hi-tech implants and braindancers still running 1990 websites?

Look at the font! You can barely tell the difference between an “a” and and “o”.

Why? It’s immersion breaking for me and annoying as hell. They didn’t have to make super-produced websites but this is 1998 stuff.

FWIW I am running at 2560x1440 resolution with almost all graphic settings maxed. Looking at that what would you guess?

All hail @raventhief for starting a new thread for us and moving all this over!

(Seriously…thanks…you are a gentleman and a scholar.)

I’m not sure I’m much of a gentleman…

Happy to help though!

Noted…my bad and my apologies. Thanks again though!

Hehe, having fun watching the Video game streamers freak-outs over the last few over the SURPRISE boobs and Junk showing up unexpectedly.

Why? It’s immersion breaking for me and annoying as hell. They didn’t have to make super-produced websites but this is 1998 stuff.

Cyberpunk has always had a kind of retro-future vibe. So the in-game website looking old-fashioned doesn’t bother me. Your screenshot is pretty fuzzy, though. You sure you don’t have scaling or something going on? Or maybe there’s some extra-fuzzy AA filter or the like.

It is weird in the character creation screen where you get to select your junk.

One would hope that level of detail will matter…I hope it does. Otherwise…why?

I did a screen grab. Nothing more.

It really looks like that to me too. If you want a pic of my graphics settings happy to do it.

Honestly though, when changing settings, I noticed no change in the game. No forced restart, no flicker in the image. It was like selecting settings did nothing. That or they figured out how to apply new graphics settings seamlessly.

It was absolutely a bug. But streamers thinking they were doing a you-tube-monitization-safe-for-work stream would suddenly appear in the mirror naked, or their boobs would clip out of a male shirts border, or their dick and balls would clip out from barbie doll tight drawers.

Ha, I ended up getting it. Pretty fun so far and the bugs aren’t THAT bad so far.

Sounds like the game really needed a few more months to work it out, but after the internet absolutely lost its mind over the delays they felt like they couldn’t do it again.

I never understood all that impatience when waiting for a game, how some people get themselves so worked up over it. Like… you’ve been waiting for years, what’s a few more months? Seems like a marshmallow problem - you can have the game now, or you can wait a little bit and have a better game… and everyone says “no! now now now!”. Not like we all don’t have 500 games to play in the meantime.

I think CDPR should’ve delayed it again even against the backlash. If it would’ve come out perfect, it would’ve been forgiven, and I think a botched launch will taint the legacy in the long term. The review scores will stick. Most games that are considered among the greatest of all time launched in a state that didn’t seem undercooked.

I got the chance to fire it up and play for a few hours last night. Well, a good part of that “playing” was flipping through hair and eyeball options but I did get through the prologue/tutorial section. No bugs that I noticed. Looked pretty on my system and the world is interesting so far. It was performing “okay” but below what the earlier spec recommendations would have suggested. Hopefully more optimization is yet to come.

1440p Ultra. Ray Tracing on, DLSS locked to Quality; Motion Blur, Chromatic Abb., Lens Flares & Depth of Field are all off (for aesthetic reasons, not performance)

Getting 60-75fps depending on how busy an area is. GPU runs at about 77C which is where it caps out in several other games (Division 2, Control, etc) so no surprise there and is at 98% utilization constantly. My card is undervolted since EVGA’s 3080 cards seem to have been overtuned and you can often get better performance out of it by undervolting it slightly so it gets lower temps and doesn’t throttle. (Doing so lowered peak temps 8C in Time Spy and got me another 300+ points to my score over stock)