Does the pope wear underpants ?

I asked something similar about two years ago, except I didn’t go unmentionable.

I would presume he does.

Catholic clergy may wear pretty much any clothing they like when not on-duty, and even then there’s some variation allowed. There may be some stricter orders with prescribed uniforms down to the underwear, but I’m pretty sure the Pope can wear boxers or briefs at his preference.

I think the more pertinent question would be, “Does the Pope go commando?”

Does he put them on just like you and me?

Write him a letter, & ask him.

Well, if Photoshop is to be believed: 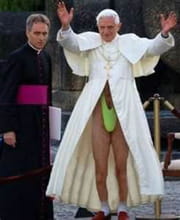 Depends on whether or not he’s in the woods.

The answer is readily available.

Does he put them on just like you and me?

Yes, because he doesn’t like to look down on the unemployed.

My gut feeling is he let’s it swing.

You knows that cloth Jesus wears when he’s on the cross - do those count as undies ?

LOL! I was wondering this too, I was thinking he would be wearing Depends
b/c he an old man . I was health aide and know how much old people leak .
Or maybe he has some kind of toilet under his robe.