Building up rep with minor factions will lead to lucrative mining missions. I recently completed mining 208 tons of Bromellite for one allied faction and 216 tons of Osmium for another allied minor faction for a total of nearly 100 mil. I happened across the Osmium mission in the same system where I had been mining Bromellite, I had been selling stuff that wasn’t Bromellite and decided to check the mission board.

I’ve been piloting an Anaconda outfitted for standard & core mining with a Taipan for defensive support. Some things – like Osmium – can’t be found in cores; the trick there is to mine a fragment, see if it contains what you’re after, then hit the rock with a Prospector limpet. That way you don’t waste limpets finding a good rock.

I just finished up the last community goal and was just hauling thermal control things( refrigerators?) In a conda that was just cargo. Kind of fun linking up in chat and loading carriers, then unloading again.
I spent a bir of time in open, but was ganked so went back to Mobius, but you can still see all the open chat for coordinating.
Collectively everyone moved an insane amount of cargo.

I am now doing the mining community goal, it’s for bromolite, gallite and something else, so I bought a T10 and outfitted it with my engineered modules from the conda and have been mining.
Not as good for core mining as steering is painfull, and targeting the seismic and subsurface mining missiles is hit and miss I think due to hard point placement. Also prospectors limpets have a 60% chance of launching successfully unless one is at a dead stop.
I took to just laser mining, so as you suggested knock off a few fragments with the laser and see what they are, then launch a prospector, although sometimes I have just kept lasering away until the fragments stop. I am being followed by about 7 collector limpets anyway and this seems to be the best use of limpets times.
It would be nice if there was and extended life engineering mod.

Once I have made it to elite I might have a look at the power play and get back to some smaller ship combat or get some more engineering ranks, I need to improve shields and laser mods, maybe looks to some of the guardian mods, I have the FSD one
Does anyone bother with missiles?
Anyone bothered with any of the power play specidi items ?

It would be nice if there was and extended life engineering mod.

Limpet life depends on the controller class, except for the Universal Multi Limpet Controller. Those never expire but the controllers are quite expensive and only come in size 7.

Does anyone bother with missiles?

My Corvette has missiles but I keep forgetting they’re there.

The Corvette is my main combat ship but I also have a Krait II with equipped with a few Shock Cannons and a hangar for defensive support. That’s a fun ship.

I’ve soloed bulk cargo missions in the T10. One time, I had three of them simultaneously and made a loop out of 'em.

For your Krait 2 which I think is combat aimed you didnt put anything in the military compartment , and have lots of cargo rather than shields or reinforcement.
Is that for weight saving or something?

I definitely need to work on some engineer grinding for my weapons and shields.

Here is my fleet , which admittedly isnt very helpful because I move everything out of the ships when I swap as I reuse the modules , although I should probably spend a few days on eng grind and at least get everyone with Felicity Farsee mods all done.

For your Krait 2 which I think is combat aimed you didnt put anything in the military compartment , and have lots of cargo rather than shields or reinforcement.
Is that for weight saving or something?

I stopped playing this after not getting far into it sometime last year. I’ve since started again and am enjoying it again (I think one of the reasons I stopped was that it was using up too much time).

Embarrassed to say I had to use the Fuel Rats after I made a stop, forgot to refuel, then launched into a sector populated by brown dwarfs. I checked all stars within reach and none of them were scoopable, d’oh! The Rats have a great setup. I put my details into their website, got given instructions on how to connect to my rat, and they had fuel to me within 10 minutes or so.

I have since learned how to filter the galaxy map so I’m only travelling via fuel stars.

I have since learned how to filter the galaxy map so I’m only travelling via fuel stars.

IME, the top four (O/B/A/F) feature the most interesting planets; sometimes I turn off all the others when exploring and refer to that as a Blue Light Special.

Good to know. So far I’ve just been doing relatively low reward missions and just going wherever they take me.

Pretty sure I found this system on a Blue Light Special trip. 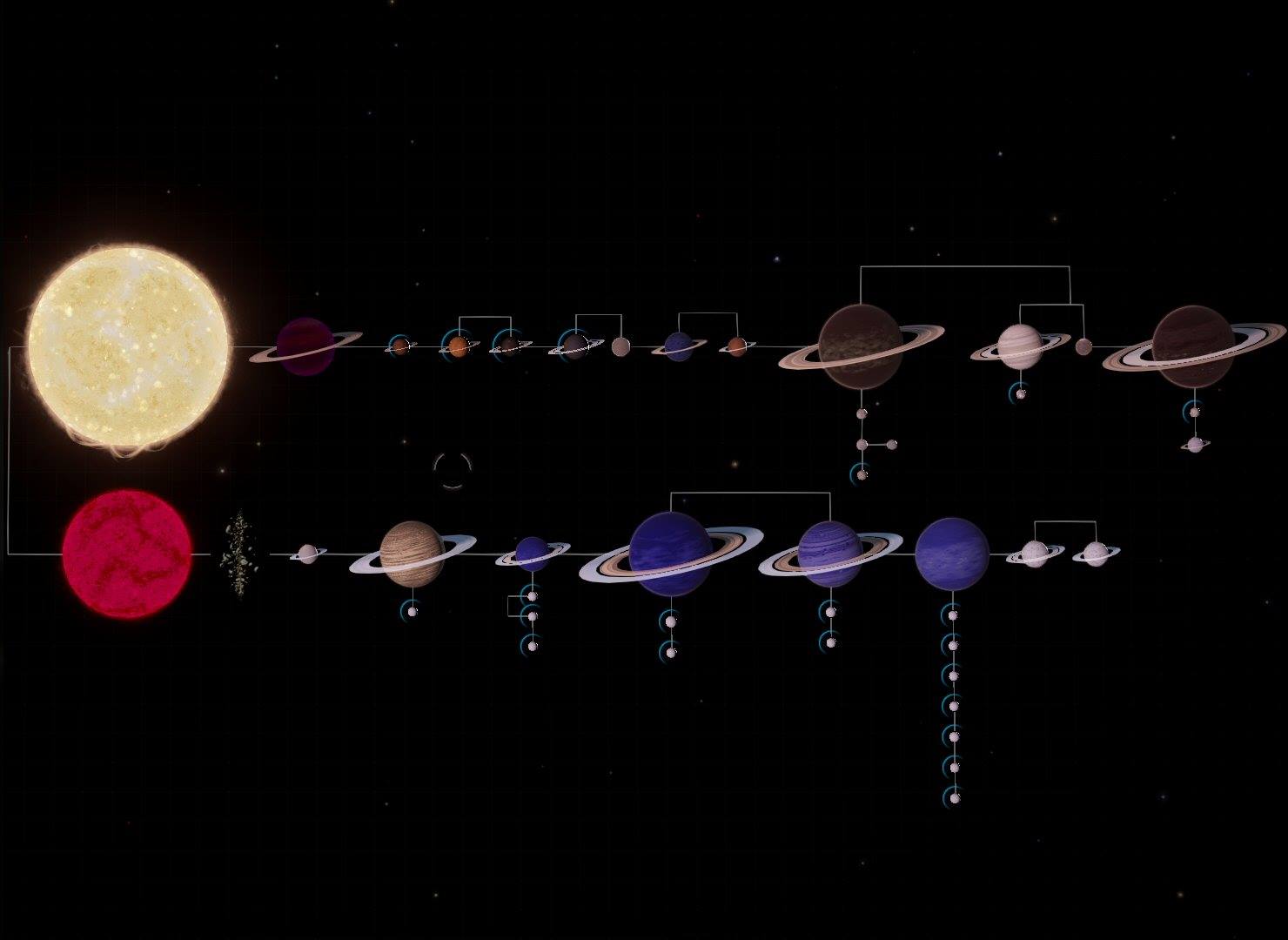 Is that 18 ringed systems ? I guess a few mining possibilities there.

I’ve been wondering around hauling and mining in the T10, ditched the auto dock/launch as it just loves to tangle in the mail slot, never really had a problem with it in the other ships.

Still haven’t received the double engineered FSD from the CG , going to get grumpy soon.

Is that 18 ringed systems ? I guess a few mining possibilities there.

No clue where it is, though; originally posted the image on Facebook didn’t want to include the system name so there wouldn’t be anyone trying to squeeze me out of First Discovery credits. I think it’s from before hotspots became a thing.

I did find another system in the Mineaconda just outside the bubble on the way toward Witch Head Nebula. So many hotspots that I decided to stay there instead of continuing the trip.

Replaced my T9’s Class 7 cargo rack with a Universal Multi Limpet Controller. Heading back to Bhotho to try it out later; got some mining missions to finish. Anaconda only has one bay that big, of course, and I didn’t want to occupy it with a controller.

Also stopped by where I had the 'Vette parked, took it to a nearby Military location and replaced one of the SRVs with the new combat model.

Taking my Corvette out to look for Guardian materials…