Florida has refused to allow a pilot program for AP African American Studies in its public schools. In a letter, the state Department of Education reputedly wrote that the course was historically inaccurate and would violate state law. As reported by The National Review this afternoon and picked up by The New York Times, The Washington Post, The Hill, The Huffington Post, CNN, ABC, CBS, MSN, USA Today, Rolling Stone, etc., even our very own #the-bbq-pit (here), but curiously not Fox News as of this writing (local coverage from WOFL).

My position on this is one of confusion. Why all the secrecy? I can’t tell if Florida is doing the right thing or not. The letter to College Board has not, to my knowledge, been published in full. Nor has the curriculum for this African American Studies course which was supposed to be offered this fall. The concept of African American Studies in general surely doesn’t violate state law, because it is offered by Florida public colleges right now. The statute suspected of being violated seems above-board to me as well.

Is Florida doing the right thing? Does the APAAS course, as proposed, violate state law? Why isn’t the curriculum publicly available? Why hasn’t the Governor/Dept. of Education told the public what specifically is wrong with the course? Why didn’t the letter cite the statute? You would think the Department would offer more specific criticism than vague ‘it’s historically inaccurate and would violate state law’, if nothing else as a matter of respect for the educators behind the curriculum.

Why all the secrecy? I can’t tell if Florida is doing the right thing or not.

“When there is any doubt, there is no doubt. That’s the first thing they teach you.”. — Sam, Ronin

Why isn’t the curriculum publicly available?

For one thing, it’s a pilot course, as you noted. It was launched last summer and is still being developed:

The College Board AP Program affords high school students the opportunity to earn college credit for courses taken during high school. After over a decade of interest in offering African American studies, the AP Program is conducting a two-year pilot for the course to incorporate student and teacher feedback, test and refine a robust suite of course resources, and deepen engagement with African American communities. The course will be offered in approximately 60 high schools in the first year of the pilot program and will expand to over 200 schools in its second year.

Why would you expect a fully developed course description to be publicly available for this course at this point, as they are for established AP courses?

And why would you expect a complete suite of AP course materials to be publicly available ever, given that the College Board develops authorized AP courses that it maintains as its own intellectual property and that schools pay for using?

Why would you expect a fully developed course description to be publicly available for this course at this point, as they are for established AP courses?

I’m not asking for a complete suite of course materials, and it isn’t against AP’s business or IP interests to publish a curriculum - which they do for all of their courses. Optimally there would be something like this: https://apcentral.collegeboard.org/media/pdf/ap-chinese-language-and-culture-course-and-exam-description.pdf

I wonder how the Florida politicians know the course Is historically inaccurate, and what those alleged inaccuracies are?

I assume the state was given the curriculum for review. It’s not like it doesn’t exist - The National Review claims to have read it and The New York Times has a statement from the College Board about how it could be revised before the 2-year pilot program ends - it’s just not published.

It’s probably full of woke ideas like “slavery was bad” and “Obama was born in the US”.

and what those alleged inaccuracies are

“The Black experience in American history is different from the mainstream white experience, and deserves to be considered as its own historical discipline.”

I can see the Florida tourism spot now, filmed on the beach:
Welcome to Florida. Stick your head in the sand!

a matter of respect for the educators behind the curriculum.

Your apparent confusion stems from a fundamental misunderstanding of the relationship between the state apparatus and its educators. There is no respect whatsoever. There is only the tallying of political “owning the libs” points to set the stage for DeSantis’s future aspirations.

That’s not how the pilot stage of AP course development works, AFAICT. A limited number of schools are trialing the course this year, and a slightly less limited number will teach it next year. But a pilot course isn’t in the “hey I might want to take that, let’s get the informational brochures from the website and read all about it” category, again AFAICT.

This is supposed to allow educators to experiment with a course and see what works and what doesn’t before College Board considers it an approved standard course. Naturally, this reasonable objective must not be allowed to get in the way of the modern “conservative” movement using the course’s existence as an excuse for their usual political grandstanding.

An opinion piece by MSNBC led me to this tweet from Florida’s Commissioner of Education Manny Diaz Jr., the individual with the authority to reject the APAAS course. 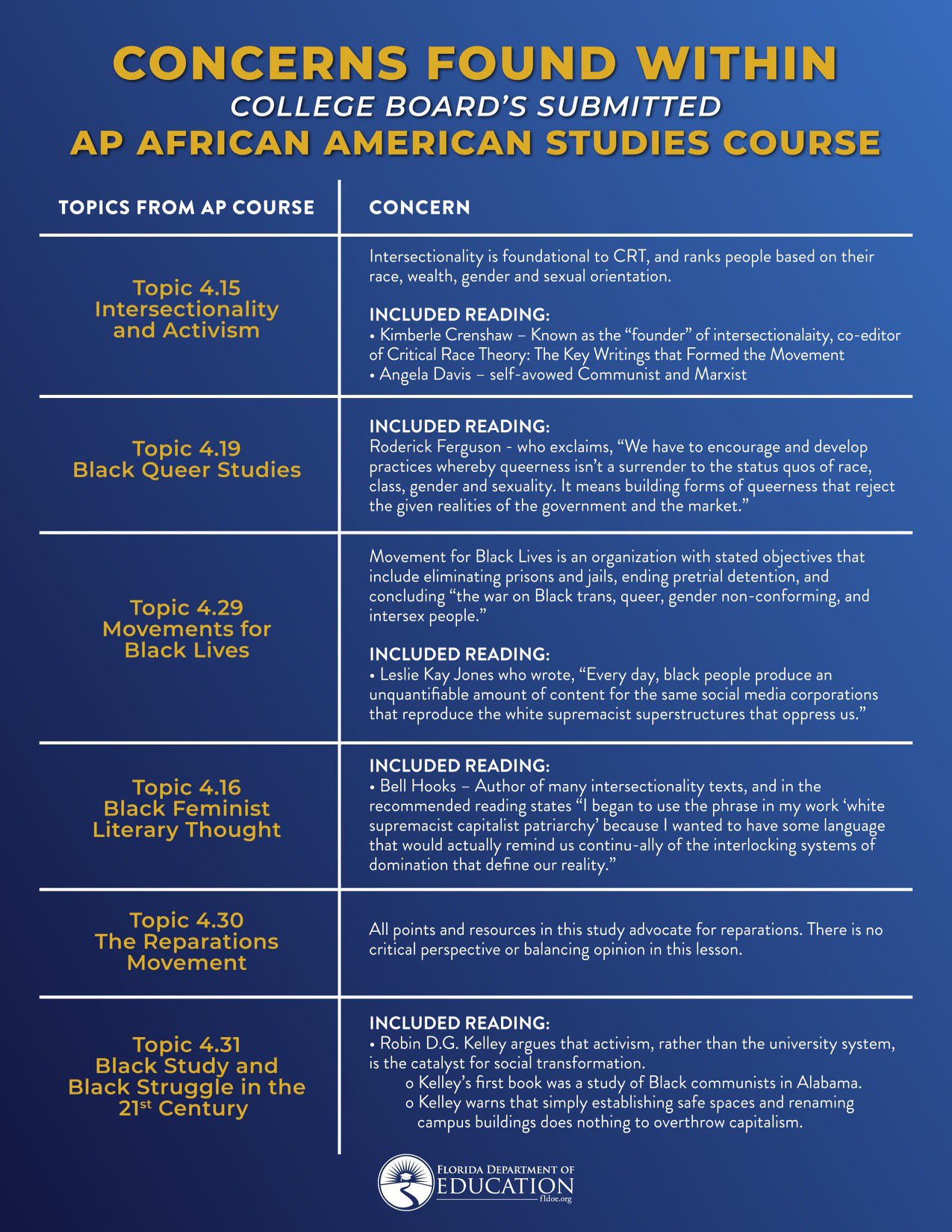 At first glance, I don’t know what intersectionality is or why it would be problematic so I’ll have to research that and form an opinion later. Problems with included readings advocating something can be easily alleviated with a critical or balancing opinion. (The Associated Press reports that the College Board will submit a revised curriciulum next week.) Many historical figures advocated radical ideas even by today’s standards, and we get around that by either not assigning that part as a reading or by offering the other side of the argument as a counterbalance. The idea that an included reading is problematic simply because of the author’s other works or actions is ridiculous, see also assigned readings from Founding Fathers who owned slaves. Or how would you teach about Communism without referencing Marx/Lenin?

Having an entire section on the reparations movement without any critical perspective or balancing opinion, if true, seems to me to violate the above-referenced statute. And generally I think it’s not a good idea to do one-sided coverage of current controversies in school.

At first glance, I don’t know what intersectionality is or why it would be problematic so I’ll have to research that and form an opinion later.

I haven’t heard of any serious interpretation of “intersectionality” beyond its original significance of “recognizing fundamental interconnections among different social categories such as race, gender, class, sexual orientation, etc.” I.e., it’s not really possible to compartmentalize different types of identity and discrimination as totally separate social phenomena.

That seems to me like a very uncontroversial observation, and I have no idea why a rational person would find intersectionality so “concerning”. Diaz’s description of it as “foundational to CRT” and that it “ranks people based on their race, wealth, gender and sexual orientation” strikes me as standard uninformed conservative hysteria about their “wokeness” boogeyman.

Seems obvious to me. Right-wing power brokers use wedge issues and narrow identity politics to create factions in the underclass and pit them against one another. Intersectionality is the discipline of recognizing shared characteristics and common interests. If it catches on, the oppressed underclasses will realize where they’re more alike than different, and who’s really responsible for their oppression. And from there it’s a short walk to putting wealthy heads on spikes. No wonder the powers that be would be so concerned about it.

You can download a copy of the February 2022 Course Syllabus here: 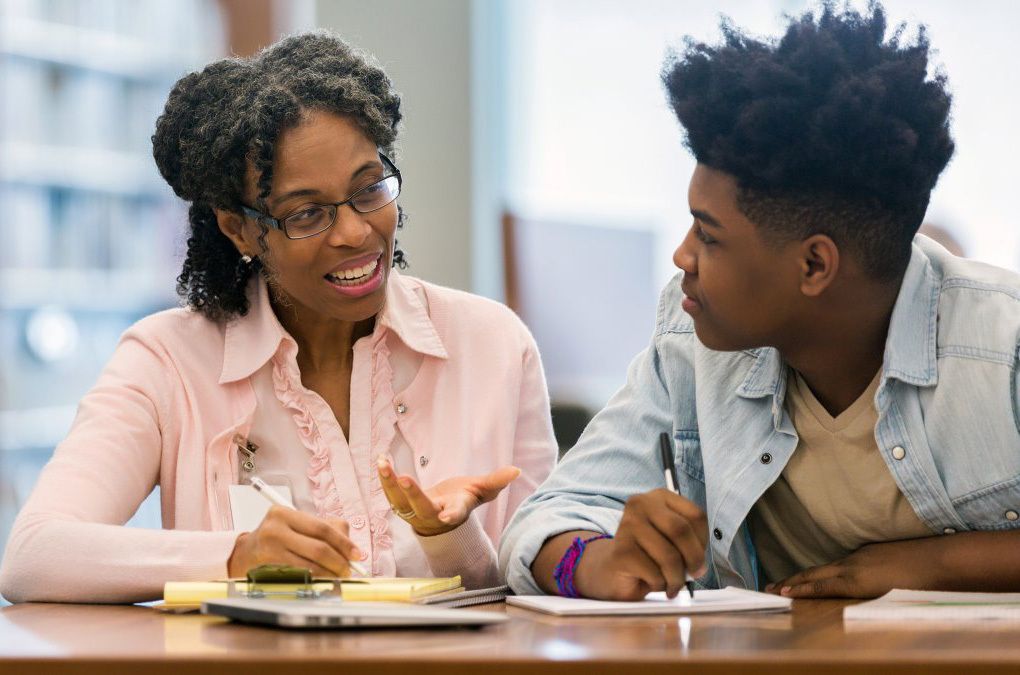 National outrage ensued after the state rejected an AP African American Studies course, but a copy of the syllabus obtained by The Florida Standard shows the course sought to teach progressive doctrines such as intersectionality and Critical Race...

However, it seems to only have detailed information on part 1, while all of the objections seem to be from part 4. It does cite the authors from the tweeted table (at least the ones I checked).

ETA: I believe this document was leaked, not released.

I can’t speak for education systems of other countries or their different experiences. There is limited time to teach, and only a portion of this time should be devoted to history. This time should reflect national experiences and include “historical wrongs” in context. There are general classes every student should take, and advanced classes only those with a specific interest choose to take. I have no problems with any of the topics being taught in an advanced elective course, or in a more limited way in a general history course which should also include much else.

As to the alleged confusion, “where there’s a will, there’s a won’t.” I don’t think education and politics generally make a good mix, but some is unavoidable, especially in the United States, and more so with certain topics.

At first glance, I don’t know what intersectionality is or why it would be problematic so I’ll have to research that and form an opinion later.

I posted this in the Pit thread, but it belongs here too:

Another case of GOP hypocrisy (how many is this now?) The BBQ Pit

I did check the reviews of Kelley’s book, it is clear that historians, for example, praised the book about the history of the communists in Alabama, because in essence it does not praise Communism, but descibes how it was that the gross racism and inequalities made some fall for that idea. And how the activism of then was used later for better ideals. Reviewing Hammer and Hoe for American Quarterly , historian David Roediger emphasized Kelley’s methodological approach as descriptive rather t…

Reviewing Hammer and Hoe for American Quarterly , historian David Roediger emphasized Kelley’s methodological approach as descriptive rather than normative project: “Kelley asks not whether the Communist party was good (or correct or independent) but how the party came to attract a substantial number of African-American workers in Alabama and to energize their struggles [emphasis in the original]. Or, more exactly he asks how these black workers could embrace and use the Communist party as a vehicle for organizing themselves. He insists on measuring radicalism not by its ideological purity but by its ability to interact with a received culture to generate bold class organizations.”[5] Writing at The Nation , Sarah Jaffe says, “Kelley details […] how black workers in Alabama made communism their own, blending the teachings of Marx and Lenin with those of the black church and the lessons of decades of resistance to slavery, segregation, and racist terrorism.”[2]

As Hegel would say, one grabs from history what is good from the past to make the present better, as in not looking at communism now, but how activism can make things better.

And the admistrators in Florida can’t have that.

I wonder if they would permit a course in “Why Florida is like a third-world country”. There’s certainly lots of great material for it!

Thanks in part to DeSantis, Florida is making Texas look almost civilized in comparison.