Fuzzy Wuzzy was a bear

Fuzzy Wuzzy had no hair.

Fuzzy Wuzzy is going to eat your face off for laughing at him.

:eek: What the fuck is that?

Does the Mail hire English-speaking copy editors? “She lethal claws are clearly visible”? “These is how Dolores would have looked”?

Does the Mail hire English-speaking copy editors? “She lethal claws are clearly visible”? “These is how Dolores would have looked”?

I noticed that as well. I also thought it was odd that it said “Vets have been left baffled by the condition of the bespectacled bear” and “The spectacled bears have a thick, dark coat normally” in another.

Not only that, IMHO (as a non-writer) ISTM it would be less clumsy to have said “This is what a healthy [type of bear] would look like.”

That bear looks like something out of “Where the Wild Things Are.”

Awww, not so fuzzy!

Fuzzy Wuzzy had no hair.

At first I thought it was a guy in a creature suit.

The BRFO (Bigfoot Field researchers Organization) insisted one mangy bear in Pennsylvania actually was a Squatch.

At first I thought it was a guy in a creature suit.

Same, the rear leg looks like a human knee in a poorly-fitted bearsuit. But the other pictures look genuine. Just an unfortunate angle! And I don’t know about you, but I’m not used to seeing furless burs.

The St. Louis Zoo had a hairless chimp, but it didn’t look much different than one with hair: 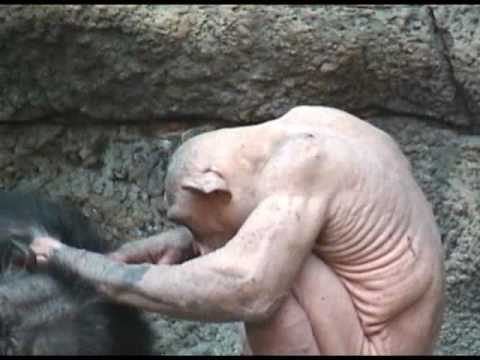 Ashes is a 13 year old chimpanzee that has literally no hair on its body. When he was born, Ashes had a beautiful fur, but by the time he turned one, he was completely bald. Looking at his arms I can understand why a chimp could easily rip a human’s...