Getting an mRNA "booster" when you've had the J&J vaccine

As it turns out, the Johnson & Johnson vaccine never gained the traction of the mRNA vaccines in the US (the last stat I saw had something like only 12 million going that route). As someone who got the J&J, I’ve been wondering for a while about also getting at least a first dose of Moderna or Pfizer, given vaccines have become so plentiful in my area that we’re doing walk-ins.

For a long while there wasn’t much information on it. There still really isn’t, but at least the question itself has been popping up a lot in the last couple of weeks.

Here’s an opinion piece from someone who just went ahead and did the two mRNA doses. It’s not clear if it was the right decision.

Here’s one from yesterday from a virologist who “boosted” via a Pfizer dose to avoid becoming a breeding ground for variants (her words). The article goes on to talk to experts who mostly say we need to wait on the science (the article lists one NIH study just kicking off).

You had the Johnson & Johnson coronavirus vaccine. Should you try to get a booster dose of Pfizer or Moderna? - The Washington Post

I don’t have a strong opinion on this and I’m not planning on doing it anytime soon, but like some folks quoted in the article, we just see very little information published on J&J, so sometimes it feels like flying in the dark, especially when a steady stream of mRNA articles is appearing.

This is as much a “what do you think?” thread as a place to update news.

They are testing mix and match, including things like when 2 doses are required, to use 2 different types. Our relatives oversees can only get the Chinese version for now (and have), but plan to travel to Europe to get one of the other (more effective) types soon.

But I don’t think you ca call it a booster, since only the mRNA one’s use the spike protein. Even catching COVID it appears that it is unlikely that your body will respond to the spikes but to some other part of the virus (one reason why it is recommended if you get COVID and recover you would still consider the mRNA vaccines, it gives your body an additional part to go after, and perhaps even a earlier one then a destroyed virus inner piece )

But I don’t think you ca call it a booster, since only the mRNA one’s use the spike protein.

Well, it boosts the immune system beyond a previous shot, so I think the term is okay…but I put it in quotes for the reason you cite, which is that it doesn’t follow a typical booster sequence.

I also got J&J. All the news about Pfizer effectiveness makes me happy and worried at the same time. I live in an area of high vaccine uptake so I’m waiting for official guidance on boosters. Also, my area has less than one case per 100,000 per day. If I lived in an area of low compliance or high case rates, I’d probably get the booster.

But I don’t think you ca call it a booster, since only the mRNA one’s use the spike protein.

The J&J vaccine is an adenovirus vector vaccine where the adenovaccine has been genetically engineered to present the coronavirus spike protein. The only vaccine out there not using genetic manipulation to create spike protein-specific antibodies in one way or another is the Chinese attenuated virus vaccine. Which is likely why that one is significantly less effective.

Got unofficially Covid in November and got J&J jab on Saturday. I could choose between JJ and Pfizer but two shots of anything seemed like overkill to me. Anyhow, spent Sunday generally sick in bed, but I’m ok now. I think I’m good, done and over for at least next 9 months.

J&J recipients can make a special request to get a "supplemental dose" of an mRNA vaccine, San Francisco health officials said Tuesday in a statement to CNBC.

San Francisco is now allowing people who got the J&J vaccine to also get a Moderna or Pfizer supplemental shot, though at the same time they are asserting that J&J is effective.

I haven’t done it yet. I still have ethical concerns about taking a shot that might benefit someone else, plus I’m not sure about the benefit.

Would you have to lie to get it? I didn’t think the vaccines are available to someone who has already “been vaccinated”?

My BIL has the same questions you have, and has asked my advice. I really didn’t know what to tell him.

My partner and I plan to get the supplemental shot next week. I’m assuming the ethical concerns have already been considered by those more experienced than me and, considering the lower efficacy of the J&J shot, I’ll feel that much better about getting on with life.

Considering how many people are refusing to get vaccinated, I wouldn’t give ethical concerns a second’s thought. I would get it immediately.

CDC should be recommending third shots for everyone at this point but they might be worried about a run on supplies.

I expect they will recommend third shots to the more vulnerable. There’s still a worldwide shortage of vaccine, and despite selfishly wanting more protection for me, i think we’d do better to distribute more of the supply to the rest of the world, both in terms of total years of life saved and in terms of reducing the generation of deadlier variants.

Would you have to lie to get it? I didn’t think the vaccines are available to someone who has already “been vaccinated”?

Yes, I suppose I would have to say that it’s my first shot.

I expect they will recommend third shots to the more vulnerable. There’s still a worldwide shortage of vaccine, and despite selfishly wanting more protection for me, i think we’d do better to distribute more of the supply to the rest of the world, both in terms of total years of life saved and in terms of reducing the generation of deadlier variants.

Yeah, I’ve been seriously considering trying to snag a third dose for that reason. (well, and improved immunity, of course.) What’s holding me back is mostly the “need to lie” thing. And the risk that even if I lie, I might get caught if they look me up on the state database, and then I lie, I get embarrassed, and I don’t even get the jab out of it. And it might be illegal. I am hoping the CDC recommends boosters for at least the most vulnerable of us soon, though.

Meanwhile, another article on this yesterday. Not a ton of new information, other than another random doctor urging people to get a third shot. 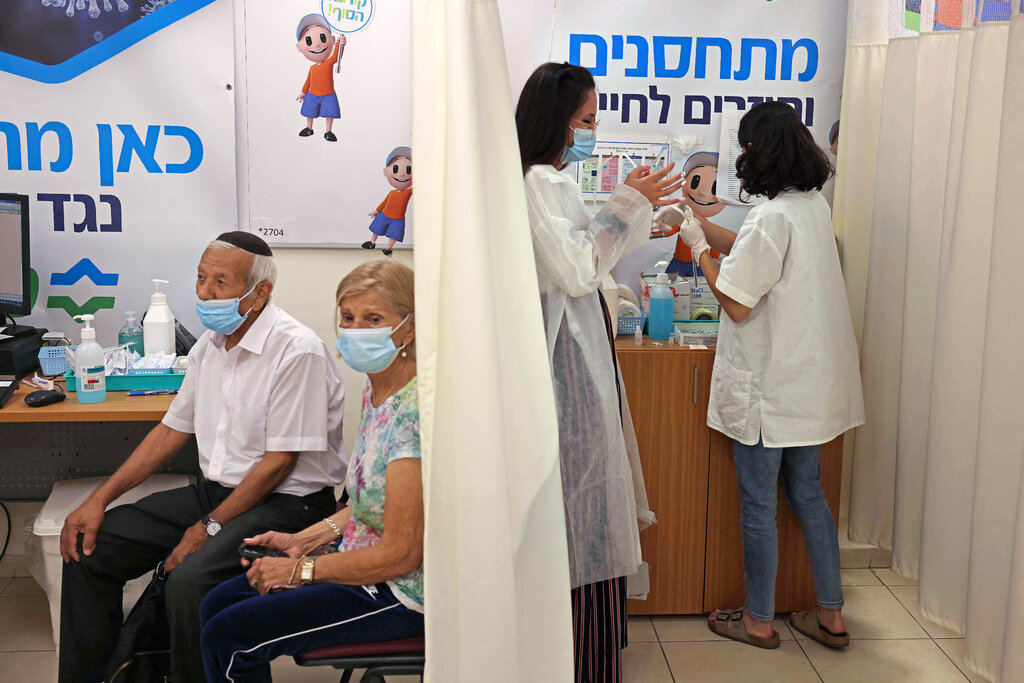 Momentum around booster shots is building in some countries. Does the U.S. need them?

And now Moderna is recommending a third booster shot, though the CDC says “no additional doses are recommended at this time.” Moderna says the “booster dose generated a strong immune response against the delta, gamma, and beta variants”.

We’re looking to fly in October and Mr. brown is a little apprehensive. Maybe getting a booster will calm him.

People who are health conscious and reckoning with the dangers of this virus need them, but we shouldn’t need them. We shouldn’t be in the position of needing them. I absolutely agree with the WHO in spirit that it’s unethical for us to basically control the supply and distribution, and as we’ve seen with the Delta variant, which emerged from vaccine-poor India, the rich countries ultimately end up screwing the global vaccination and pandemic control efforts.

What’s really needed is something that, unfortunately, nobody here or even in other developed countries seems to have the political will for: complete vaccine and masking mandates - full stop. That’s what’s needed but we know it won’t happen. We’re going to be dealing with this pandemic for a long time, I’m afraid.

I kind of doubt it matters much how the boosters and original vaccines are mixed and matched. Your immune system doesn’t make different antibodies/t-cells/etc… based on which vaccine you got the first time. It’s just that some stimulate your immune system more than others.

So getting a different booster shouldn’t cause you problems- the whole point is to re-stimulate what’s already there.

I got the J&J shot and I am hoping to get a booster of either one of the other two. But I live in Iowa where I’m about the only one still wearing a mask (other than at my doctors’ offices). The odds of my State deciding to let anyone get a second or 3rd dose (moderna/astrazeneca) is extremely small.

So I’ll keep social distancing, washing my hands and wearing a mask or two. In the hopes that the rest of the World gets their first jabs, that my jab keeps me out of a hospital despite whichever variant, and that people who refuse to get vaccinated (not those who can’t be) turn violet like Violet of Willy Wonka fame.

You know, I agree with that in concept, and I understand that the different vaccines ultimately stimulate the same response. Nonetheless, somehow the mRNA-based vaccines have repeatedly showed a higher efficacy, which suggests that something different is happening.

Whether that translates to anything meaningful in terms of mixing shots I don’t know, but on the other hand, any kind of supplement or extension may be helpful.

There’s growing evidence - not absolute proof, mind you - that this might not be accurate. The Astra Zeneca vaccine has been combined with Pfizer/mRNA vaccines and early evidence suggests robust immunity. One hypothesis I’ve seen is that different vaccines can ‘teach’ your immune system to do different things to guard against viral infection.