I think you should go and kick complete and murderous ass.

This is, no joke, one of the funniest damn things I’ve ever read on this board.

Yeah! Got one! Bookmarking this for the next time I get Pitted.

If you’re competing against Area Man, you should be okay. From what I’ve read of him in The Onion, that guy is a total douche.

Being a stranger here,

Make sure you brush up on the Gorn’s weaknesses.

And keep your eyes peeled for gunpowder ingredients.

Ugh. I just need to stop going to groups made up of old white men. I usually avoid it, but the few times I do… ugh.

This one was a business networking event at a local restaurant. Glen. Tom. Greg. Vic. One other gentleman, I can’t remember… gonna call him Bob. Glen is the only one who may be younger than I.

I arrive at what used to be a pretty lively event, 40-50 people, but COVID has effectively blown it up so that, surprise, the only ones which showed up today were strong maskholes. My first mistake, not thinking this through.

I’m talking to Tom, the leader of the group, making small chat before the official start of the event. I’m hearing a bunch of conservative politics talk, “Afghanistan”, “Biden”, etc in the background.

Glen decides he wants to pass off a funny he heard on Facebook, turning to the new 50-something white guy as to make sure I caught this (Don’t assume, Glen!):

The crowd, watching (they have never seen anyone challenge the consensus before), has the good sense to scoffaw at the “I saw this on Facebook” line. Glen looks around for support…

“Anyway, they’re selling shirts off this. Would they be selling shirts if people didn’t believe it?”
“Glen, it’s FAR more likely that someone is selling these shirts as to grift off people who are dumb enough to believe that an entire class of people don’t know 2+2=4. Now…” I said, turning to Tom… … is this a political debate society or a business networking lunch?

Tom called the meeting to order after that one.

So they do the “sixty second” elevator pitch, which actually lasts 2-3 minutes each because there’s only the 6 of us so who cares about keeping time? I give my spiel about writing, mentioning that I’m working on the book, and how I write web content for money, explaining the process using one client as an example.

But there’s no agenda. And after the elevator pitch, well, the men started speaking again. I went ahead and paid for my meal, asked Greg about a bird painting he was selling ($200, really matches my house decor and theme), took a picture of it: 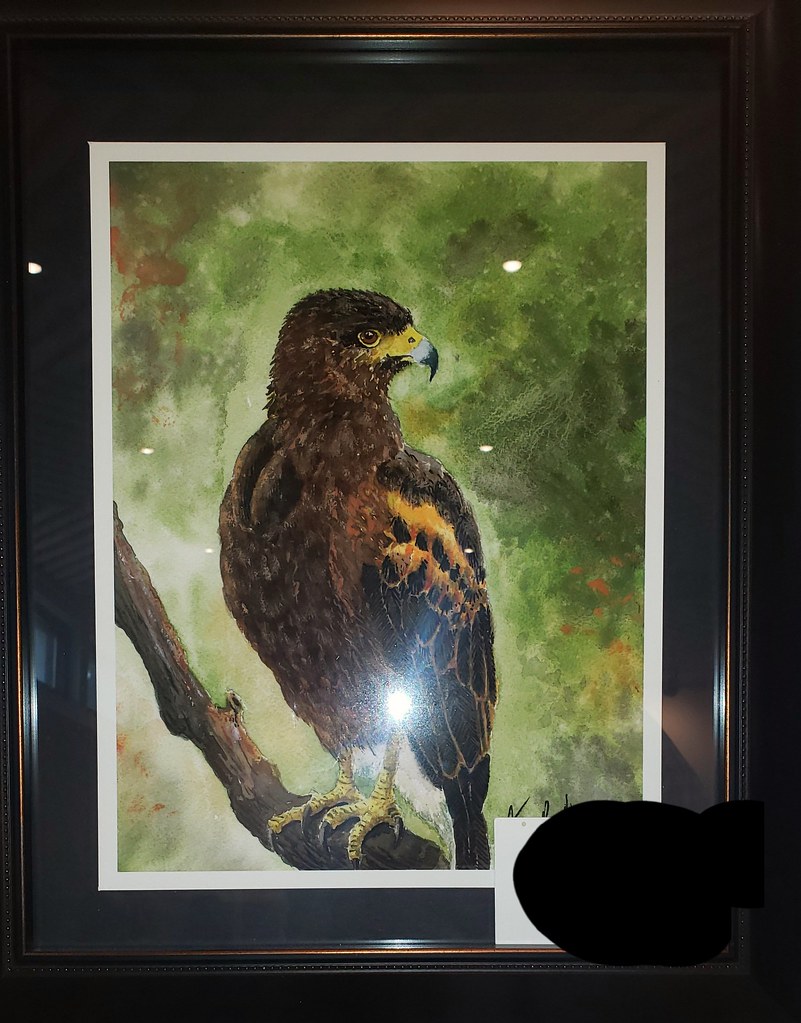 And sat back down to Glen (again) openly saying

Sigh. I couldn’t resist. I waded in…

“What stolen election?”
“2020, of course.”
“2020 wasn’t stolen. Trump was just a horrible President and lost.”
Tom: “He was the best President of my life.”
Me: “By election day 2020, over 250,000 Americans and 16,000,000 jobs were killed on Trump’s watch. By any objective measure known to God or Man, that is a bad job.”
Greg: “He had COVID happen on his watch.”
Me: "Yes. And to that point, when the Democratic President who made the morally difficult decision to incinerate a quarter-million Japanese, Harry Truman, made the decision by saying “The Buck Stops Here”. And when the Republican Donald Trump was faced with the task of ending World War COVID as soon as it started, he said “I Take No Responsibility At All.” And by election day, this decision had killed a quarter-million of our countrymen.

"Think about it this way guys. You hire someone to manage your Wendy’s. By the time his annual review came up, he killed some customers via an easily-prevented food poisoning, a quarter of the staff are no longer working there because of the economic impact of these deaths, and the man is reviled by 60% of the customer base. Would you allow this man to keep his job? No, of course not, and don’t try to argue otherwise. 2020 was a job review, and Trump got his ass properly fired just like Hoover and Carter were fired.

“Lastly, to make my position clear: by any measure of Christianity of which I am aware, Donald Trump… by his COVID response alone… will spend his time screaming the pain of the Damned while writhing in torment during his eternal stay in Hell. For it to be otherwise, “Thou shalt not lie” and “Thou shall not kill” have no meaning.”

They blink during this. Taken aback. Tom is the first to respond:

Tom starts talking the military. I interrupt. Tom (correctly, and to my shame) admonishes me for interrupting, so I shut up and listen. Tom’s point was that the military had become too woke under Biden.

“Tom, the way the President exercises his authority is via budget authority. Joe Biden cannot just order the military to spend a lot of money on “Woke” stuff, the Constitutional process doesn’t work that way. Remember when Trump failed to get military money for the Wall? Same problem. If he wants to make the military more ‘woke’, then he has to advocate to Congress so they allocate money to create programs to do that. And there’s no guarantee Congress will buy in. Regardless, Tom, Biden hasn’t done it because the military is, again via the Constitutional process, working under Trump’s 2020-2021 budget authorization which he signed back in December. So if the military has been more ‘woke’, they’re doing it under Trump’s budgetary authority.”
“Well, name one good thing Biden has done.”
"200,000,000 Americans vaccinated. The $1 trillion infrastructure deal. The COVID relief bill back in March. Student debt abeyance continued.

“Look, guys, I didn’t come here to argue politics - had I known, I would’ve prepared myself for such a discussion. I’ve already paid my bill, y’all go on and convince yourself that following political leaders who are maliciously killing fellow citizens via lies about God’s universe won’t have any eschatological implications on your soul, and we’ll see who’s right. Have a good day.”

Bravo. (Do you think you’ll be asked back?)

It’s open attendance, I can come every week if I wanted to.

2+2=5 was definitely a thing on twitter for a while.

@kareem_carr
I don’t know who needs to hear this but if someone says “2 + 2 = 5, the correct response is What are your definitions and axioms? not a rant about the decline of Western civilization.”

Shocking that conservatives will misconstrue a mathematical argument into a political attack on fellow citizens! They should know better!

Funny thing is, they seem unclear on basic math themselves - being unable to solve problems like “Which is number is bigger,306 or 223?” or “Is 81 million larger than 74 million?.

eschatological implications on your soul,

I imagine with this phrase they just stared at you the way a cocker spaniel stares at a quadratic equation.

Almost blew up my toaster this morning.

I’m so glad that I bought an Air-fryer ( but I always unplug it when I’m done).

It’s open attendance, I can come every week if I wanted to.

Well, whatever you do… don’t bring a grenade. /s

Only verbal ones, I promise.

I was helping some parents who were struggling with 8th grade math during the first part of the lockdown, when schools were just struggling here and parents had to step up. There was a subset of parents who refused to believe that irrational numbers existed.

They understood the proofs, they admitted they couldn’t refute the proofs, but they just wouldn’t believe that you could “prove a negative” (e.g. that there were no integers a and b such that a/b = sqrt(2).

A year and a half later I know them as the anti-mask, anti-vaccine crowd in town.

Eh, I know ageism well. I’m old enough to remember when Republicans demanded no criticism of the President in the wake of a terrorist attack.

I’m guessing these weren’t ultraintuitionists who reject the law of the excluded middle. Or even knew what any of those words meant.

No lie, that’s an awesome painting.

I’m so glad that I bought an Air-fryer ( but I always unplug it when I’m done).

I went from a toaster to a toaster oven to an air-fryer. It does toast really well. My secret to making awesome (but really bad for you) toast is to take the bread, butter it thoroughly with real butter, then toast it. The bread soaks up the butter like a sponge and yet still gets crispy on the outside.