I’m looking to decorate my walls a bit more, and I’d like some images/scenes that are iconically German. I was a German major and have a lot of fondness for the language/culture/history, but I’ve honestly forgotten a lot of the imagery and am looking to Dopers to help me.

I had a poster of this up for a long time but I want something new, however that’s a good example of what I’m looking for. Either historic important pictures or even very famous city scenes or skylines (particularly Berlin) would be great.

I already have a couple of maps of German-speaking countries circa 1912, so that’s probably off the table. Also, would like to avoid WWII stuff which paints Germans in a negative light (so, like, no photos of american troops surveying concentration camps upon liberation. Not that those images aren’t very important, of course, but I don’t think it’s appropriate to display them on my walls).

Thanks for all your help!

The Rhine, vineyards, and not one, but two castles - Gutenfels on the bank and Pfalzgrafenstein in mid-river.

You definitely need a picture of a castle, which is the iconic German image to me. I suggest Neuschwanstein. And of course the fall of the Berlin wall.

One of the last pics of Hitler, handing out awards to Hitler Youth in the final days of the war. It encompasses the remnants of what Germany had aspired to with the reality of the effects of those aspirations and what it meant for the future.

Movie posters of UFA films from the Weimar period.

If a Porsche going full-out isn’t an iconic German image, I don’t know what is

A Pikhelm with the Imperial Eagle. Or, a Stahlhelm (your choice of model and markings).

Bluecher and the Prussians at Waterloo.

The Imperial battle flag with the eagle.

If you want something less commercial, get prints of the works of Caspar David Friedrich, the German who ushered in the Romantic movement in painting. Because so few of his works ever left Germany – I think there’s ONE in the Met in NYC, and ONE in the Louvre – they will be new to the eyeballs of your friends. On a less formal note, this is what I think of for an iconic image of Germany:

Oh, yeah! Anything with Zeppelins!

Young women who come over to your apartment always seem oddly mesmerized by depictions of Zeppelins. I have no idea why.

Germania, the country personified as a hot babe wearing pseudo-medieval garments, usually carrying a sword and a gold shield with the imperial eagle on it.

Also, any photography by August Sander or Helmut Newton.

Images of WWII superimposed on the 21[sup]st[/sup] Century 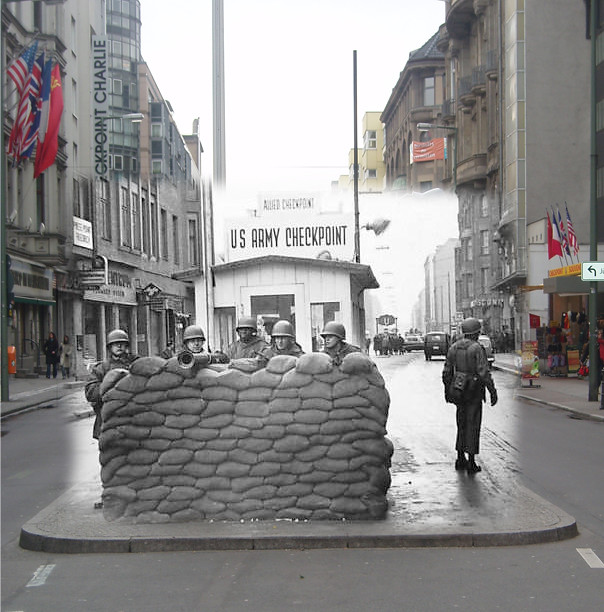 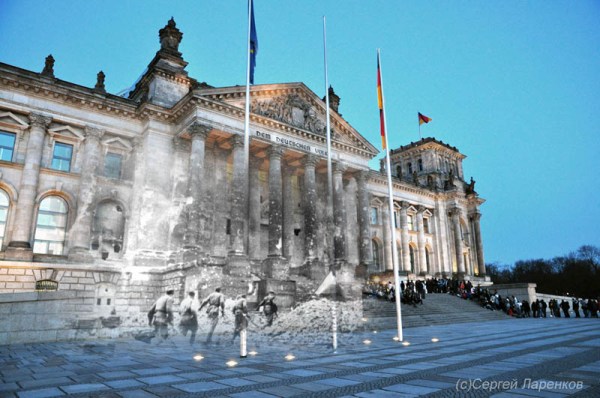 Sergey Larenkov is a Russian-based artist/photographer who was deeply impacted by World War II. On his Live Journal blog, the Saint Petersburg native has put together a tremendous set of col…

I think a photo of Unter den Linden in Berlin would be an attractive addition. I also love the way certain Bavarian towns look, it’s like a storybook village. Check out images of Rothenburg and Garmische.