Our planet Earth (also called the World, as well as the scientific name which is Terra) is, I’m sure you’ll agree, one of the top planets in the Solar System. For a start, it is not one of the Gas Giants like Jupiter, on which there’s no place to stand, no roads, no cars. Nuts to that! We are lucky to inhabit a stable terrain without which our civilization would not have evolved.

Terra (Earth) is made of dirt, sand, rocks and other useful minerals, plus water (oceans, lakes, rivers including the Mighty Nile) and outside of that is the Atmosphere, chiefly made up of Air. The Air is especially important, not just for breathing but to protect us from meteors and other space junk, otherwise our surface would be a pockmarked hellscape - look at the Moon! Once the Atmosphere was in place, Terra (Earth) was complete, done and dusted - nothing gets in and nothing gets out (gravity), all set for Man (and Woman) to come in and take over! Should be perfect.

Well, not quite. This is related to how the planet was formed. Long ago, clumps of space dust, and whatever else was floating around at the time, attracted other clumps and eventually, when all the dust had been sucked in, it formed a huge ball. This ball was red hot, owing to the tremendous pressure at the center. Clench your fist real tight, you’ll see what I mean. Now this new planet had one job - to cool down and solidify. This has been a tremendous FAIL!

How long should it take? Well, estimates vary, but last I checked the Earth has been around four billion years and change, is that long enough for you? I know, when you take something out of the oven it can take a while to cool, but four billion years? Plenty of time! Come on! ENOUGH!

Maybe you’ve seen a drawing that shows a cross-section of the Earth. The middle is nothing but white hot molten iron, then there’s red molten iron, then a layer of gooey stuff called the Mantle, and the very outer edge is a paper-thin layer called the Crust - now there’s a word that inspires confidence! If it were ice on a pond, you wouldn’t dare set foot on it, but that’s where we live and nobody cares.

Well maybe it’s time we did care. This monkey business has gone on way too long - we need a Manhattan Project to cool down and solidify the core of the Earth (Terra) once and for all and we need it now! People talk about standing on “terra firma”, but what we have now is pretty not-so-firma!

There needs to be a plan. One thing we could try is to drill a lot of holes in the sea bed and let the cold water rush in and douse all that heat, Mantle, Magma, all of it! I admit, that probably wouldn’t work too well. What does need to happen is we get all the best Scientists together, put their heads together, spend a lot of money and make a strategy to settle this thing for good. Maybe invent a ray that stops all the atoms from slipping around and gets them to line up, which theoretically would instantly make a solid block. You could call it “Project Sim-R-Down”.

There are many good and important reasons why this needs to be done:

Another problem this would fix is Continental Drift. Suppose a million years from now America bumps into Russia? How do we defend ourselves? I guess we’ll just stand there and go, “Oh, too bad, we could have done something but it’s too late now”. Freezing up all that lava would put an end to it, but only if we bother to make the effort.

Laugh at me if you must, I just hope this can happen soon so I can finally get some sleep, instead of worrying about all that Hot Stuff burbling and roiling around way too close for comfort. Maybe then we can finally have an Earth we can be proud of. Aren’t you a little embarrassed to be living out your years atop something called the “Crust”? Wouldn’t you rather live on a planet that’s FINISHED , the mortgage paid off? Perhaps one or two of you can make a suggestion to get the ball rolling. But please, no stupid ideas. I just don’t have time to bother with any wacky proposals.

There won’t be any trouble when America bumps into Russia, providing they’re both covered by the same insurance company.

Build a Wall to keep that magma out. Make Earth Great Again!

Build a Wall to keep that magma out. Make Earth Great Again!

But how do we get the Magma to pay for it?

I thought the scientific name is Sol III.

I thought the scientific name is Sol III.

That’s Fake News! The big problem this planet has is being scientifically correct.

Then Earth, or Terra, will truly be Sol I
as God means it to be!

Are you thinking of Borges’s Orbis Tertius?

Are you thinking of Borges’s Orbis Tertius?

Too messy! Just kick them out of the Planet Club like we did Pluto.

Okay, a direct solution proposed for the OP: How to cool down the Earth and make it more solid. Added bonus: Also eliminate the world-wide nuclear stockpile.

Set off all the world’s nuclear weapons, more-or-less at once, at strategically chosen locations. Vaporize some substantial amount of the planet’s liquid water, filling the sky with such dense clouds as will block the sun world-wide for a thousand years of dreaded “nuclear winter”. (ETA: See: Star Trek: The Voyage Home for a visualization of how this might look.)

That should get the world plenty cooler than it is now, creating a new ice age for the ages, perhaps even freezing most of the world’s remaining liquid water. That should be cold enough to get the magma at least a few degrees cooler.

The first thing we need to do is replace the core which is mostly iron with a melting point of a measly 2800 degrees. Take it down to Pep Boys and trade it in for one of those tungsten models that don’t start to get mushy until you get into the neighborhood of 6000 degrees.

Okay, I should have guessed none of you (so far) want to take me seriously - typical Liberal weaselry. Next time I will ask for nothing but dumb ideas; maybe it will trick you into suggesting something useful.

And by the way, Pluto IS a planet, I’ve seen pictures.

The core of Jupiter is probably about the size of Earth. According to a scientist at Lawrence Livermore National Laboratory they used freaking laser beams to demonstrate that “Jupiter’s core is made of pure diamond”.

Clearly, Earth needs some major bling to compete with that!

I don’t know if I believe that, but suppose it’s true? Here we are wasting all that effort trying to go to Mars when we could go to Jupiter, blow all that gas away and we’ll be rich!

The OP is brilliant and normally I would be totally onboard with this, but I have it on good authority that the Earth was destroyed at 7:35:05am UTC on 10 September 2008.

Too messy! Just kick them out of the Planet Club like we did Pluto.

Well, if we could find our Illudium Q-36 Explosive Space Modulators which we misplaced somewhere, it would be a piece of cake.

If we were number two, maybe we’d try harder.

And by the way, Pluto IS a planet, I’ve seen pictures.

All the pictures I’ve seen indicate that Pluto is a cartoon dog. 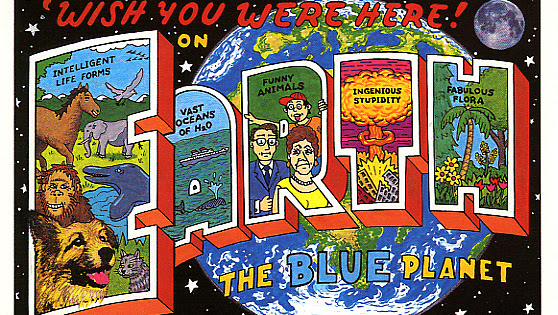