That’s new, right? Is it a Discourse thing, or has the site went to Cloudflare?

No clue what you’re seeing. Can you provide more context please?

When a page was loading for me earlier this morning, there were five multi-coloured dots showing.

Cloudflare, Inc. is an American content delivery network and DDoS mitigation company, founded in 2010. It primarily acts as a reverse proxy between a website's visitor and the Cloudflare customer's hosting provider. Its headquarters are in San Francisco, California. Cloudflare was founded in September 2010 by Matthew Prince, Lee Holloway, and Michelle Zatlyn. Prince and Holloway had previously collaborated on Project Honey Pot, a product of Unspam Technologies. From 2009, the company was ventu...

Cloudflare is a kind of delivery agent between the user and the website you’re visiting. In short, it’s mostly security measure to prevent DDoS attacks and is used by many web servers. If for some reason, the website (in our case, the Dope) cannot be loaded, you’ll get an info/error page from Cloudflare. I strongly suspect that’s what happened to the OP. Totally normal and nothing to worry about. Refreshing the page/tab fixes the issue in most cases. 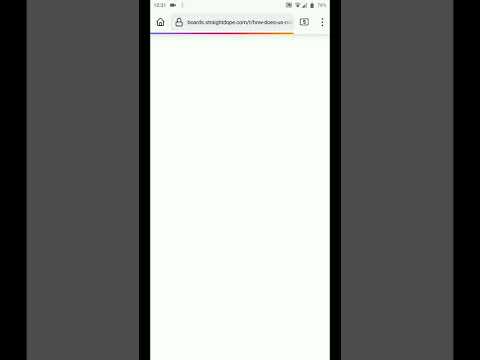 Discourse did an update late yesterday. They may have added the “loading” bit when pages are loading more slowly.

ETA: I checked the change log and yes, the “loading” screen was added in the most recent update. The update was otherwise mostly bug fixes.

You mentioned Cloudflare in the OP, but I see nothing referring to it in your clip, just the “loading” animation for a second.

TIL that they call it a “javascript challenge”. https://www.namehero.com/startup/forget-blocking-a-cloudflare-js-challenge-is-the-best/

Again, this is a Discourse thing. It was added in the update that came through last night. It has nothing to do with Cloudflare.

This is what Discourse has to say about it:

For users with less powerful devices, or low bandwidth, the initial page load may take a few seconds. Discourse now displays a splash screen, rather than a blank white page, so users know something is happening.

Again, this is a Discourse thing. It was added in the update that came through last night. It has nothing to do with Cloudflare.

Yeah, I saw that. I was answering EinsteinsHund’s question.

Just noticed I was stuck on the loading page. Opening in a new tab worked.

I’m at a hotel and the speed and latency are not great here.

Yeah, I’m seeing this now, too. At the same time, I’m also seeing total load times that are vastly shorter than what I’d been seeing before, so if that keeps up, it looks like that came along with some other changes that are very much for the better.

This is what Discourse has to say about it:

For users with less powerful devices, or low bandwidth, the initial page load may take a few seconds. Discourse now displays a splash screen, rather than a blank white page, so users know something is happening.

Makes sense. I never see it on my desktop, which is directly wired to 700 Mbps internet, but I recently started seeing it during certain page load operations on my wireless tablet.

I started getting the splash screen and a couple second delay on my (CAT5 cable connected) Windows 10 laptop yesterday. I wouldn’t categorize it as a “less powerful device” and when I run a test my download speed is around 250Mbps. No splash screen when I pull up the SDMB on my Pixel 2 using wifi on the same network. Strange.

This mirrors my experience - zero issues on desktop over wifi, frequent on my medium-weak tablet over cellular. I should try on the phone, but I almost never bother, text is too small, and that’s why I have a cellular tablet anyway.

ETA: I checked the change log and yes, the “loading” screen was added in the most recent update. The update was otherwise mostly bug fixes.

@engineer_comp_geek , have they published a rather detailed list of the bugs they’ve fixed? I’d like to know if they’ve addressed any or many of the bugs that I and others have noted in recent weeks in the “Site Feedback” forum.

Have they fixed the severely broken cut-and-paste functions and seemingly related quoting functions? Last I heard, this was just blown off as being a problem with people using older browsers, which makes no sense at all as an excuse for breaking such basic and long-established browser functions.

There was also a note that the right-side scroll bar is broken, and I think some other problems. Are they doing a clean-up release to fix stuff like that, or are they just on going on a rampage of “improving” the site worse and worse?

ETA: Let me remark that they DO seem to fix some things, even things that seem less critical than broken cut-and-paste. A while back, I reported that dragging-and-dropping text into any text input window (which one would think is an obscure and rarely used trick) didn’t work – and they had that fixed in just a few days!