Nationals game stopped suddenly, players ordered off the field. One report on Twitter about gunshots.

@Nationals
A shooting has been reported outside of the Third Base Gate at Nationals Park. Fans are encouraged to exit the ballpark via the CF and RF gates at this time. We're working with law enforcement to provide more information as soon as it becomes available.
Paintcharge July 18, 2021, 3:08am #102

I’m really irritated by the umps in the Sox-Yanks game tonight. It was delayed for rain while it wasn’t raining, then it started pouring in the 6th, but they kept playing long enough for the wanks to take the lead. Not the first game this year that that the Sox have been screwed by umps keeping the play going through a downpour.

holy crap did they play long enough for it to be official or will it be rescheduled?

They suspended the game and will finish it tomorrow before the regular game.

The given interpretation is that any twitch in the direction of 2B constitutes an attempt, and puts the runner at risk.

Unless it’s Aaron Judge? I mean, the guy moved five or ten feet towards first base in that clip.

I’m curious what the impact would be. The immediate impact I suppose is a slightly higher overall BABIP. But the real issue with MLB hitting these days is emphasis on the 3 true outcomes (K, BB, HR). Strikeouts are boring and they happen way, way too much.

One gets the distinct sense that MLB is just run by chickenshits. Banning the shift is easy and no one has a particularly specific vested interest in it. Doing anything that will cut down on the plague of strikeouts is hard.

Banning the shift is dumb IMO. If batters won’t adjust to take advantage of the holes then that’s on them.

Agreed. I hate the shift, but that’s on the batter to learn to hit to different parts of the field. Good hitting fundamentals takes care of the problem. Tony Gwynn (RIP) would have torn the shift to shreds.

Is it just me or is the NL West the best division in baseball. Whoever wins that division has to be seen as the fave to win it all, right? My division, the NL Central, has only one good team in it: the Brewers. Looks like the same is true of the AL Central. The AL East has two quality teams. The NL East and AL West are weak on the whole, though Houston seems like they’re at least competitive.

Tony Gwynn (RIP) would have torn the shift to shreds.

Tony Gwynn never would have seen the shift, just like Juan Soto or Joey Votto never see the shift now. I’m torn on suggestions to ban it. I agree that players should take advantage, but the math says they should just keep doing what they’re doing. And it’s boring as hell. I’m all for tweaking the game for its overall benefit.

Is it just me or is the NL West the best division in baseball.

Has been for the last two seasons.

The most Mets thing ever in today’s game. Pirates are batting and the hitter hits a “little dribbler” down the 3rd base line. It is in foul territory initially and the pitcher runs over and knocks it toward the dugout. The umpire calls it a fair ball, and it was fair because when the pitcher touched the ball with his glove, the ball was just touching the line. Mets stand there arguing while 3 runs come in.
Pirates go up 6-0 in the 1st.

Last night Mets blew a 6 run lead in the 8th and 9th and are close to losing 5 of 7 in the series. Against the Pirates! And DeGrom and Lindor are now on the 10 day IL

I hate being a Mets fan.

Everyone see the Diamondbacks forget how to baseball against the Cubs today? They had the bases loaded, one out. Grounder to first, throw to home for the force out. The batter-runner Kole Calhoun stops on his way to first so he can turn around and watch the play and the catcher throws to 1st for the third out.

A second consecutive 6-0 lead blown in the Pirates-Mets series, only this time the Pirates blew it.

Face it, the Mets do better when half or more of their lineup is on the IL. They should have a daily shuttle flight from Syracuse to restock.

I’m just hearing that since 1906, there have been only 2 occasions where different teams blew 6-0 leads on back to back games.

Alcides Escobar, one of the newest acquisitions for my Nationals, has been doing very well for us, and singled in the game-winning RBI in our second game today against the Padres.

Mike Trout just tweeted that he’s heading to Oakland where the Angels are playing. 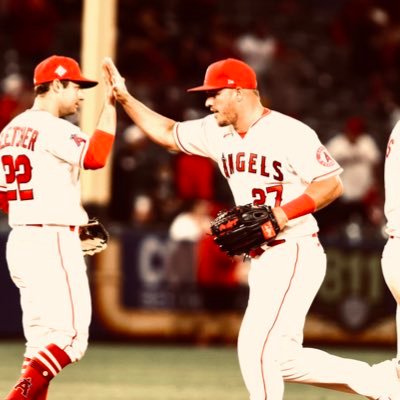 I don’t follow baseball much at all, but I ran into this article in the NY Times today (possibly paywalled), which basically says that pitchers have been cheating for years and years by using banned sticky substances and everybody basically just looked the other way because it wasn’t bad enough.

More than a month into the era of increased scrutiny on the application of prohibited sticky substances to major league baseballs, spin rates on fastballs have fallen about 4 percent, as strikeouts have decreased and on-base percentage has risen — midseason changes without parallel in decades.

Although applying any foreign substance to a baseball has been prohibited since the 1920s, the use of sticky substances like Spider Tack ⁠— a powerful adhesive created to help competitive strongmen and strongwomen hoist enormous Atlas stones ⁠— was an open secret, in line with the sport’s tradition of winking at scofflaws until the situation gets out of control.

This seems completely crazy to me. Applying foreign substances has been banned for a century but… pitchers do it anyway and nobody really cares until the pitchers start pitching too good?? WTF is up with that?

A sports website is hyping the “top 5 exit velocity home runs of the week”.

I can’t get excited about exit velocity. Home runs are nice, long home runs too. Velocity*, not so much.

*sports analysts inexplicably fell in love with “velocity” as a pseudo-sophisticated term for fastball speed. It’ll probably creep into other areas as well. “He’s got great velocity on the basepaths.” “Hobbs moved up through the minor league system with velocity.” “The velocity with which the manager was fired is not surprising given fan expectations.”

WTF is up with that?

Read the May and June threads, it’s covered quite a bit. No one cared because it helped pitchers maintain control (I.e. less wild pitches in a batter’s ear), and all your pitchers were doing it as well, so why rock the boat?

That was all fine and good until they started using stuff that was too good - it ramped up spin rates off the charts, and MLB pulled the plug.

That was all fine and good until they started using stuff that was too good - it ramped up spin rates off the charts, and MLB pulled the plug.

Further explanation: the net effect of higher spin rates was that pitches became increasingly harder to hit, and league-wide batting averages (which have been in decline for some years) dropped even more.

Through yesterday’s games, the league-wide batting average this year is .241, which is more than 20 percentage points lower than it was in 2009, and as low as it’s been since “The Year of the Pitcher” in 1968.